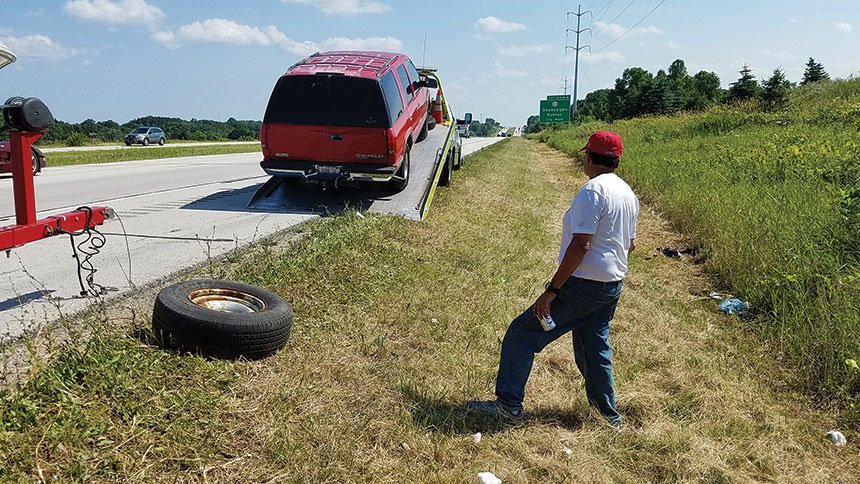 My wife and son, salty crew dogs that they are, decided this rocking and rolling wasn’t a fun or worthy adventure. We turned back but still enjoyed the day.

We headed home the next day. My tow car, a 1997 Chevy Tahoe, has about 111,000 miles on it. Contrary to what my son and son-in-law believe, it’s not a Rent-a-Wreck reject. Both kids learned to drive in this car. They took it to school with them. My daughter even learned how to deploy an air bag in it.

We made it to Egg Harbor when the Tahoe started to cough, hesitate and misfire. I pushed on, figuring I would repair it when I got home. Then the dashboard fell apart. This rattle proved noisier than the radio, so we decided not to listen to Patsy Cline cry about her lost love.

At least I had the car under control, or so I thought, until the left front tire blew. It was shredded. You could see its insides as well as torn steel belts on the outside. It was my turn to rediscover the immutability of Murphy’s Law.

I pulled way, way over to change the tire. No problem. Except the jack stand and assorted tools were in the back. Do you have any idea how much junk can fit in the back of a Chevy Tahoe?

We made it to Egg Harbor when the Tahoe started to cough, hesitate and misfire. I pushed on, figuring I would repair it when I got home. Then the dashboard fell apart.

After pulling everything out on the safe side of the car, I went to work. My son played the opening theme from the “Beverly Hillbillies” as well as “Dueling Banjos” on his cellphone to accompany me. He also called the Sheboygan County police. An officer came, saw what was going on, and asked for my license and registration. At least they were in good order.

I got the spare tire out, and the police officer positioned his squad car to help divert traffic. Mr. Murphy again had my name on the tip of his tongue. The lug nuts wouldn’t budge.

We called a tow truck, thinking the driver would be able to remove them in an instant. Twenty minutes later, the tow truck arrived, and the driver took out his cross bar. He could not budge the lug nuts, either. He took out his impact wrench; the battery was dead.

The only thing left to do was to tow the car, which meant we had to unhitch the boat and reload the car. The car was loaded onto the flatbed tow truck. The tow truck could only have two passengers, so the nice officer transported my son in the back of his squad car.

Knowing discretion is the better part of valor, we did not take a picture of him in the rear of the squad car.

After we arrived at the shop in Sheboygan, it took the tow truck driver another 45 minutes to put on the spare. Fortunately, we include towing on our car insurance. After a $20 deductible and three dollars for sodas, we were back on the road. Unfortunately, the spare wasn’t meant to haul a boat. That meant a trip to Goodyear for two new front tires. Forty-five minutes and $200 later, we picked up the boat.

We had doubled our four-hour journey back to Highland Park with no trouble at all. Remember the loss of power in the Chevy? A spark plug wire falling out of cylinder #3 took all of five minutes to fix.

The next day, we decided to go back to Waukegan, tootle around in Lake Michigan, and leave the boat at our in-out service. The water was calm, and we had a great time. I was able to get the boat back to the dock with no problem.

I keep the trailer sans boat in my spare driveway. While I drove the empty trailer back home, Mr. Murphy woke up and remembered my name. First the brake failure light went on. The steel brake lines on this 20-year-old car had started to leak in three places. New brake lines were only $500.

At home, I looked at the trailer. The 16-month-old right front tire was completely shredded. Trailer tires don’t have warranties. A new tire was $80. Amazon sent me the rubber welting for $20 so I could stop the dashboard rattle.

My boat car is back together and doing OK, despite what my son thinks. Last night he made me a vodka martini using Death’s Door Vodka.

Stuart Zwang rented boats in Lake Geneva, Wisconsin, before joining Skokie Valley Sail & Power Squadron to learn more about boating. A senior navigator with inland and coastal navigation certifications, he is currently District 20 administrative officer. He and his wife, Lorri, enjoy boating on Lake Michigan aboard their 23-foot open-bow Larson. This article first appeared in the squadron newsletter, Running Lights.