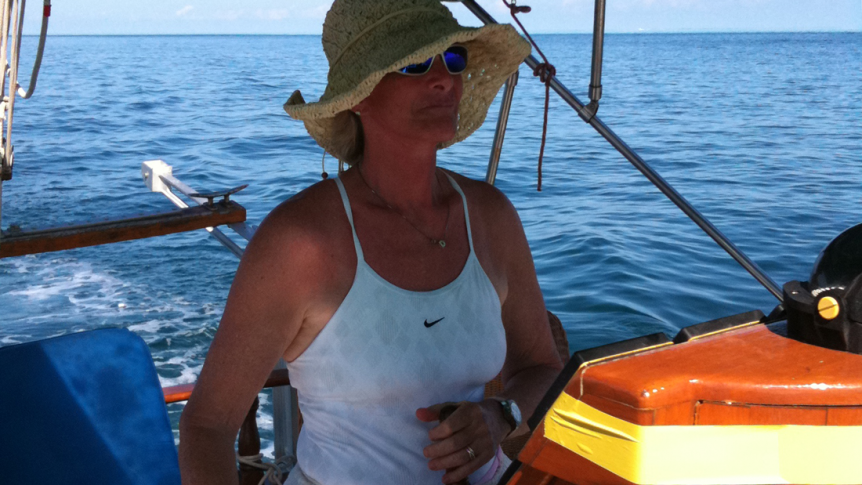 The Thursday before I was to leave, I received a phone call telling me the trip was off because the 52-foot Island Trader was having mechanical difficulties. I was heartbroken. Then on Sunday evening, my cellphone rang. The captain asked if I could fly down to Cancun and bring parts from my local West Marine. I agreed.
Later that evening, we decided that the three of us, myself and licensed captains Charlie and Phyllis Atha, would fly down together to help steer the boat back, as the parts required to repair the autopilot weren’t available.

I met the Athas for the first time at the Fort Myers airport. After arriving in Cancun and clearing Customs and Immigration, we headed to the boat. 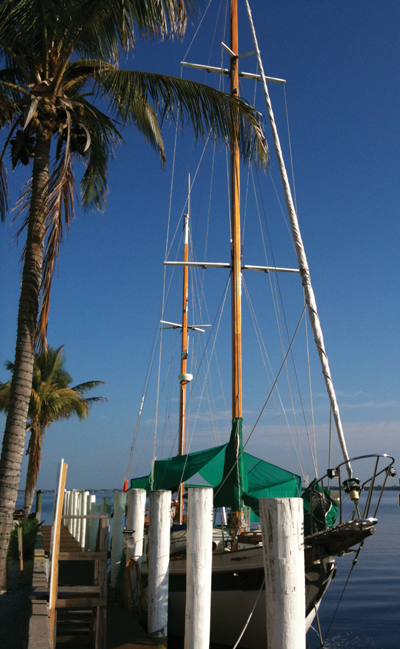 Calypsa at the dock

Calypsa had sustained damage to the jib, transmission, bobstay and taffrail. We set to work immediately. Charlie, Phyllis and Ken, another crew member, went for provisions while I stayed behind to play boatswain. When they returned, we only had to stow the groceries and remove the foresail that had shredded itself on the spreader with the help from Hurricane Alex. This required a razor knife since the wind had done a thorough job of winding the sail around the forestay. My heart dropped at the first slice into the cloth and again as the captain carried an armload of sail down the dock for disposal.

After waiting for two days, we left the marina at 0830 on 7 July and headed for the Dry Tortugas on a course that would safely clear Cuba. I got seasick 10 minutes outside of the reef north of Cancun and spent most of the first 24 hours in the bunk. A bird joined us six hours after departure and spent the night cooing miserably outside the hatch above my head as I slept on the cabin sole.

Having gained my sea legs the next morning, I went topside and spent a good part of the day steering since the rest of the crew was tired from standing the night watches. After 38 hours, we reached the Dry Tortugas and anchored off Loggerhead Key. I slept on deck most nights and thoroughly enjoyed seeing the Milky Way, Scorpio and Sagittarius for the first time without the ambient light of Punta Gorda.

We snorkeled a wreck just off the island early on 9 July and spent the rest of the day exploring Fort Jefferson before setting off for Punta Gorda at 1600. The wind was taking a rest, so we motor-sailed throughout the night.

One of the crew brought out his sextant but wasn’t having much luck getting a sight. I got out my sextant and showed him how I adjust my filters and take my sights.

After seeing how it was done, he used his to take sights, which I reduced using Celestial Tools. His sights were amazingly accurate. I was thrilled at being able to pay forward the knowledge I’d gained from the N course.

Moonrise the following morning was memorable, gold on a background of horizon clouds. Still motor-sailing, we arrived in Punta Gorda on the afternoon of 10 July. I would definitely take the trip again.

Dannela Varel, SN, of Peace River Sail & Power Squadron/22 lived aboard her 37-foot Island Trader in Rochester, New York before bringing it to Florida in 1986. Recently licensed as a pilot, she flew her 172 Cessna to the Bahamas in January. Her goal is to fly to the islands regularly, where she hopes to have a boat.