He proudly served in the U.S. Marine Corps and was a member of the Daytona Beach Sail & Power Squadron and the American Legion. 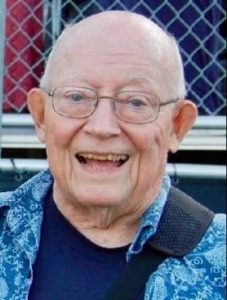 William Irving Neef passed away peacefully at home Oct. 19, 2017, under the care of EvergreenHealth Hospice and his loving family, Lois, Nancie, Frank and Mary. Bill is survived by his wife Lois of 40 years and his son Frank Neef of Moses Lake; his daughter Nancie Wood of Kirkland; his stepdaughter Sandra Morris Of Kennewick; and stepson Ronald Morris of Richland.  They have seven grandchildren and seven great-grandchildren. He is also survived by his brother Henry Neef of Blair Nebraska.

Bill has always been active in his home churches. He volunteered many hours at the Suncoast hospice during his time in Florida. He was a past rear commander and a life member of the United States Power Squadron.

In lieu of flowers the family request memorial contributions be made to EvergreenHealth Hospice, 12822 124th Ln NE, Kirkland, WA 98034 or OverLake Park Presbyterian church or a charity of your choice.

William “Bill” Chilton Lucas Sr. passed away unexpectedly in his home at the Lake of the Ozarks Sept. 7, 2017.

Bill was born Nov. 8, 1930, to Reuben Elmer Lucas Sr. and Mary Lulu Bewick Lucas at Boone County Hospital in Columbia. He was a true renaissance man.

END_OF_DOCUMENT_TOKEN_TO_BE_REPLACED

Bill was born in Roslindale, son of Katherine (Bittighoffer) (Stefaney) Nickell and Richard Stefaney. After graduating from Jamaica Plain High, he worked at the Arnold Arboretum as a tree surgeon, before continuing his education at Boston University. Bill served first with the U.S. Naval Submarine Reserves and then with the U.S. Air Force during the Korean War. Then, with the assistance of the G.I. Bill, he attended Boston State Teachers College. Bill worked passionately as a teacher first in Stoughton, Dedham and Puerto Rico, before 30 years in the Milton Schools as a teacher and administrator.

He was very active in the United States Power Squadrons where he taught Junior Navigation and was a member of the Navigators Club, and in later year with the Retired Educators Association of Massachusetts. Bills skills extended well beyond the classroom: in his youth he enjoyed working backstage at various theaters in Boston and later ran the Milton Junior High Drama Club, he was an amateur magician, and he always found time to spend with his family most especially his beloved grandchildren as their Grampy. Bill lived a full life and made many fond memories over the years, vacations with family and friends to Wolfeboro, New Hampshire, remained closest to his heart.

Bill is survived by his beloved wife of 43 years Catherine (Driscoll) Stefaney of Weymouth, his loving children Mary Stefaney of Weymouth, Julie Volkert and husband Todd of Calif., Emily DeLeon and husband Jorge of Shrewsbury, and Thomas Stefaney and wife Kendra of Weymouth, and his cherished grandchildren Katelynn, Liam, Connor, Haley and Emmett. Bill is also survived by his godchild Shannon, and many loving nieces and nephews. He is predeceased by his parents, his brothers John Stefaney and Richard Stefaney, and by his sister Eleanor Stefaney.

Donations in memory of Bill may be made to Hospice of the South Shore for the outstanding care they provided to Bill during his final days at 30 Reservoir Park Dr., Rockland, MA 02370, or to The Friends of the Unborn at P.O. Box 692246, Quincy, MA 02269.

On Aug. 20, 2017, Llad Phillips, 82, husband, father, grandfather, good friend, professor of economics, avid sailor, and connoisseur of fine wine, aged scotch and excellent tequila, passed away. Llad was born to Schuyler and Onita (Stone) Phillips on Feb. 25, 1935, in McCool Junction, Nebraska, a town settled by his pioneer ancestors. Llad moved to southeast California in the 1940s, ultimately settling down at the ranch where his father was born in Perris, California, and graduating from the same high school his father attended.

After obtaining a degree in nuclear chemistry from UC Berkeley, Llad joined Glenn Seaborg’s lab at UC Berkeley’s Radiation Laboratory, where he worked on the discovery of radioactive isotopes. Perhaps impacted by the electricity of their discoveries at the Rad Lab, Llad fell in love with his colleague, Carolann Rose Rossi, whom he married on June 28, 1958, and with whom he shared 59 years of marriage before her passing in 2016.

Ever open to the next adventure, Llad obtained his doctorate in economics from Harvard University in 1969. Upon graduation, he spent his entire academic career in the Economics Department at the University of California, Santa Barbara. While at UCSB, he published widely on the economics of crime and justice, deterrence, and population demographics with Harold L. Votey Jr. and William S. Comanor, his long-time colleagues and best of friends. In addition to his academic work, Llad served as chair of the Economics Department and provost of the College of Letters of Arts and Science, and co-founded the UCSB Economic Forecast Project.

A great lover of nature and the outdoors, Llad could often be found hiking in the hills above Santa Barbara, backpacking the High Sierras, kayaking and sailing the Pacific Ocean, and experiencing the wonders of the National Parks. In his last week of life, Llad fulfilled his life dream to visit Glacier Bay in Alaska. His family and friends will remember him for his deep love of opera and mariachi bands. Upon retirement, Llad joined the Santa Barbara Sail & Power Squadron, where he served as squadron and district commander.

Llad is survived by his three daughters: Jacqueline Smith, Sharon Phillips and Colleen Phillips, and their spouses; his seven grandchildren: Brian, Sarah, Kyle, Declan, Kieren, Phelan and Gabriel; and his many friends and fellow adventurers.

In lieu of flowers, the family asks that donations be made to Stanford University with a note that they’re in memory of Llad Phillips to support Dr. Gregory Heestand’s Research Fund in the School of Medicine.

Past Commander Marcia Rowland, JN, was a life member and Commander of Santa Barbara Sail & Power Squadron from 2013 to 2015. She passed away at home, surrounded by family on June 13, 2017. She is survived by her husband, Dick, and two daughters.

Marcia will be remembered for her leadership and command, and SBSPS benefited greatly from her contributions. In addition to holding leadership positions, Marcia was a popular course instructor, including Basic Boating, Seamanship and Cruise Planning. Besides her work on behalf of the squadron, Marcia was a well-respected loan officer in a local bank and, in later years, a volunteer at Sansum Clinic’s Information Desk.

Marcia had a passion for the water. She was a competitive swimmer and three-time winner of the Women’s National Spearfishing Championship. She loved sailing with Dick on Westwind, their 34-foot Islander.
She will be missed but not forgotten. 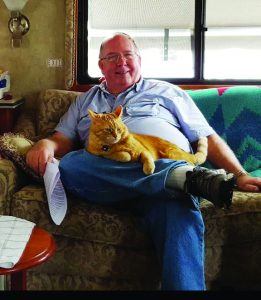 Arnold Medalen began writing articles about stargazing for The Ensign magazine in 1997, first as Modern Navigator and later as the Stargazer. In the 20 years he wrote for The Ensign, Arnold provided readers with a regular source of stargazing information and inspiration. He will be greatly missed.
END_OF_DOCUMENT_TOKEN_TO_BE_REPLACED

Claude “Skip” Wharton, AP, was born Oct. 8, 1947, in Mount Clemons, Michigan, son of the late Claude Arthur Wharton Jr. and Lucille Keats Wharton. He was a retired director of business operations for the Applied Research and Development Institute of the South Carolina Research Authority. Skip was a Citadel graduate, Class of 1969, and was a captain in the U.S. Army. He served in Vietnam where he was the recipient of the Silver Star for gallantry in action. His various organizations included membership in The Citadel Alumni Association, life member of American Legion post 0172, 11th Armored Cavalry Regiment Veterans of Vietnam and Cambodia Life Member, 14th Armored Cavalry Regiment Association Life Member, and a member of the VFW Member-at-large of South Carolina.

Known for his love of God, country, family and all things in water and wood, Frederick John VanVechten Brockway Clark died Feb. 11, 2017. His friends and family knew Brockway as a larger than life character, not just because of his lanky 6’ 2” frame. He was born May 5, 1930 in Cedar Rapids, Iowa, the third of four children of Helen and Charles Amory Clark II. The family moved to San Diego in 1936 and built their own home in midtown overlooking Lindbergh Field.

END_OF_DOCUMENT_TOKEN_TO_BE_REPLACED 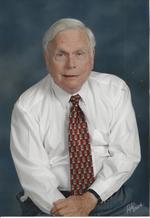 Ray Sullivan and his twin sister, Shirley, joined the family in Miami in 1928. He passed into his heavenly home on Feb. 12 while in the VNA Hospice House in Vero Beach, Florida. He was predeceased by his parents, Forrest and Ruth Sullivan, his twin Shirley Logue, his brother Eugene, and his daughter Karen. He is survived by Marnie Sullivan, his loving wife of 40 years; his daughter Jill Sullivan (Dan Reichert) of Charlotte, North Carolina; and his grandson Daniel Schueppert of Minneapolis, Minnesota.

Ray obtained his undergraduate degree from the University of Florida where he played the alto saxophone in the band. He was a lifelong Gators fan. After graduating from Emory Dental School in 1954, he served as a dentist in the U.S. Army at Fort Lewis in Tacoma during the Korean Conflict. He joked that he fought the Battle of Puget Sound. He and his first wife Jacqueline returned to Miami in 1956 where Ray began his superlative dental practice of 40 years. Ray’s professional life was a testament to his generosity and his desire to help others. He donated his time and skill to all of the children at the Baptist Children’s Home in Miami for over 30 years. He also donated dental care one day a month at the Miami-Dade County dental clinic for many years and participated in several medical/dental mission trips to Anguilla, Guatemala and Nicaragua. He was a member of several dental societies and served as president of the Kiwanis Club of South Miami. He was also a member of Arcturus, the Key West think-tank while he and Marnie lived in the Florida Keys. He and Marnie also enjoyed membership in the Key West and Sebastian Inlet Sail & Power squadrons.

Throughout his life Ray made and kept many friends, some of whom he had known since they were “in diapers together.” He was a caring soul who touched so many in his lifetime with his friendship, love, support and generosity. He didn’t have a mean bone in his body and was a fun guy to be around. We are all richer to have shared our time with him. 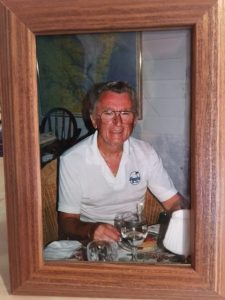 P/C Thomas Leo Cantrell, JN, of Alamitos Sail & Power Squadron, passed away at his home in Anaheim, California, on Oct. 2, 2016. He was 89. He went through chemotherapy for colon cancer like a trooper then died of a heart attack. He was born in Somerville, Massachusetts, graduated from high school in 1945 and joined the navy. He married Irene McDonnell on Oct. 3, 1948, and in 1957 he moved his family of four from Woburn, Massachusetts, to Anaheim, California. He was active in the United States Power Squadrons for many years, obtained his Captain’s License in 1996 and was a past commander. He loved being on the water and had his own boat for years. He used his expertise to help a friend take his boat down the Intracoastal Waterway from Maryland to Florida, and it was the best time of his life. He will be truly missed.