Submit an obituary for a deceased USPS member by using the form below. 5 Dec    The brightest star in Taurus, Aldebaran, is 1 finger-width to the moon’s lower left at dusk. [Binoculars] [vc_row padding_top=”0px” padding_bottom=”0px” border=”none”][vc_column width=”1/1″]1 Nov    In the southeast at sunset, Fomalhaut is 2½ fist-widths below the moon. Mercury reaches its greatest elongation of the year, 18.7 degrees west of the sun.

3 Nov    Mars is less than ½ finger-width above Kaus Borealis, the uppermost star in the dome of the Teapot constellation, Sagittarius. [Binoculars]
END_OF_DOCUMENT_TOKEN_TO_BE_REPLACED [vc_row padding_top=”0px” padding_bottom=”0px” border=”none”][vc_column width=”1/1″]1 Oct    The moon is above the dome of the Teapot constellation, Sagittarius, low in the south tonight. Mars and Antares are 3 fist-widths to the lower right.

3 Oct    The moon lies between Altair, 2½ fist widths to the upper right, and Fomalhaut, 3½ fist-widths to the lower left.
END_OF_DOCUMENT_TOKEN_TO_BE_REPLACED

If you carry a VHF radio onboard (and you should), you must maintain a watch on channel 16 when the radio is on and not being used to communicate. You may also maintain a watch on VHF channel 9. Note that urgent marine information broadcasts, such as storm warnings, are announced on channel 9 only in USCG First District waters (northern New Jersey, New York and New England).

Most radios have a memory scan option where you can add specific channels to the memory and press scan. The radio quickly switches through and listens to each channel, pausing if someone is using that channel and then resuming the scan.

END_OF_DOCUMENT_TOKEN_TO_BE_REPLACED

By Rex Allen Holden With the end of another boating season fast approaching, it will again be time to haul and winterize my sailboat.

Every year, I have trouble remembering where I put stuff the season before. I still cannot find the repair kit for the inflatable dingy.

END_OF_DOCUMENT_TOKEN_TO_BE_REPLACED

By Keith Dahlin Back in the early ’90s, I lived aboard my Columbia 28 while attending university. I often walked down the dock like a kid in a candy store, making note of the boats I liked (and wanted). One in particular always made my mouth water. A few slips down from me floated September, a classic, beautifully lined Cal 40.

While walking to the marina early one morning, I found September 6 feet deep. Only the mast and spreaders placed the boat within its slip. Shocked and bewildered, I later found out that a seacock or hose connection failure had caused the boat to sink. I imagined it silently sinking in the middle of the night.

END_OF_DOCUMENT_TOKEN_TO_BE_REPLACED

By Dave Osmolski In my 14 years as a vessel examiner, I have rarely seen a set of jumper cables on a boat, and I don’t carry jumper cables on mine. I carry four batteries, any one of which is capable of starting my engine. The odds of all four being depleted at the same time are minuscule.

Talking with my brother-in-law, a former sailor, got me thinking of sailboats and equipment. The day was stormy, and we were discussing a sailboat’s predilection for lightning strikes. We talked about using jumper cables as emergency lightning protection by directing the current from a lightning hit to the water. While not a perfect solution, it would be better than having lightning blow out a metal underwater fitting.

END_OF_DOCUMENT_TOKEN_TO_BE_REPLACED

By Joe Belanger Fifteen years ago, my wife, Lee, and I began an RV retirement trip with a twist. Our goal was to see the country; the twist was to volunteer for two-month intervals in different locations. Several cross-country trips landed us in deserts and mountains, beside lakes and along coastlines.

END_OF_DOCUMENT_TOKEN_TO_BE_REPLACED

By Bob Burton After arriving in Spanish Wells on the northwest end of Eleuthera, Bahamas, I tied up my 52 Hatteras convertible at about 1600. Although I didn’t know it at the time, the 70-foot lobster boat Four Ways, parked four boats over, was about to become one of the main topics of conversation in the small fishing community for years to come.
END_OF_DOCUMENT_TOKEN_TO_BE_REPLACED
[vc_row padding_top=”0px” padding_bottom=”0px” border=”none”][/vc_row][vc_column width=”1/1″][/vc_column]

On June 28, 2014, we sadly had to accept the passing of one of our organization’s most outstanding women, P/C Geneva Wilson, SN, of Gautier, Mississippi. This rare individual has been a shining example of what can be accomplished in this country with a solid work ethic and perseverance. 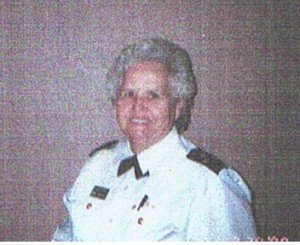 She was born Geneva Legate on 28 Feb. 1931 in Arkadelphia, Arkansas, during the darkest days of the Great Depression, the daughter of an Oklahoma cotton farmer, with eight brothers and sisters. Always a bright and conscientious student, she overcame the hard times and was able to attend prestigious Baylor University for two years then finished her undergraduate degree at the University of Oklahoma.

Geneva’s is survived by her husband, Robert Wilson, a retired Army officer who also speaks fluent Chinese. Robert served as an interpreter during the extended peace talks after the Korean War. The couple spent several years in Washington, D.C., while Robert worked for the Defense Intelligence Agency. Always driven to learning more about her world, Geneva studied at the University of Maryland while living in D.C. She also studied at the University of Frankfort in Germany for two years while her husband was stationed there. Adept at languages, Geneva became fluent in German, Spanish and Mandarin Chinese.

When Robert retired from the Army in 1964, they returned to Oklahoma where Geneva started a 20-year career with the US Postal Service of Oklahoma City, rising to manager of carriers and ultimately postmaster.  She retired as US Postmaster, attaining the US Post Office High Expectations Achiever Award.

Geneva also was an accomplished airplane pilot with an instrument rating flying many types of single engine airplanes. Somehow Geneva and Robert found time to raise five children plus two of their 15 grandchildren.

In 1992, the Wilson’s, both fully retired, moved to Gautier, Mississippi, and joined the Singing River Power Squadron in 1994. Geneva became an active boater, and within a few years she was selected for command of the squadron. Her leadership and dedication were superb, but her participation in the USPS Education program has become legendary. Since joining the squadron, except for a relatively short period when Geneva was hospitalized from a serious stroke, none of her squadron mates can ever remember a single boating class or vessel safety check event that Geneva was not actively present as a student, instructor, monitor or examiner. She entered the Junior Navigation Course with seven other squadron mates but was the only student to complete the course. She went on to be the only person from her squadron to achieve a full certificate in the 21st century. She truly was, and will always be remembered, as one of the great treasures of the United States Power Squadrons.

P/Lt/C David A. Sumner, P, of Smithtown, N.Y., passed away at the age of 66 after a battle with cancer. He was a member of Smithtown Bay Power Squadron, where he had served as executive officer and earned 8 merit marks.

Originally from Beaver Falls, Pa., Sumner started his career as a locomotive fireman with the Pennsylvania and Lake Erie Railroad while he was still in high school, and then became a management trainee with the Penn Central Railroad. He received a bachelors degree in economics from Geneva College in Beaver Falls, where he met his future wife, Patty. They married and moved to Smithtown, where they raised their two children.

In 1973, Sumner joined the Long Island Rail Road as an air brake examiner. Over the years, he held a number of leadership roles, and as general manager of service planning and quality assurance, he developed the railroad’s timetables. He supervised operations in Pennsylvania Station during critical times. On 11 Sept. 2001, he developed the emergency plan to bring thousands of stranded commuters home after Penn Station had been closed. In the blackout in 2003, he worked to evacuate trains stuck in the tunnels and to restore normal service the next day. When he retired in 2006, Sumner was chief program officer for operations.

In his spare time, he enjoyed boating, fishing and spending time with his four grandchildren.