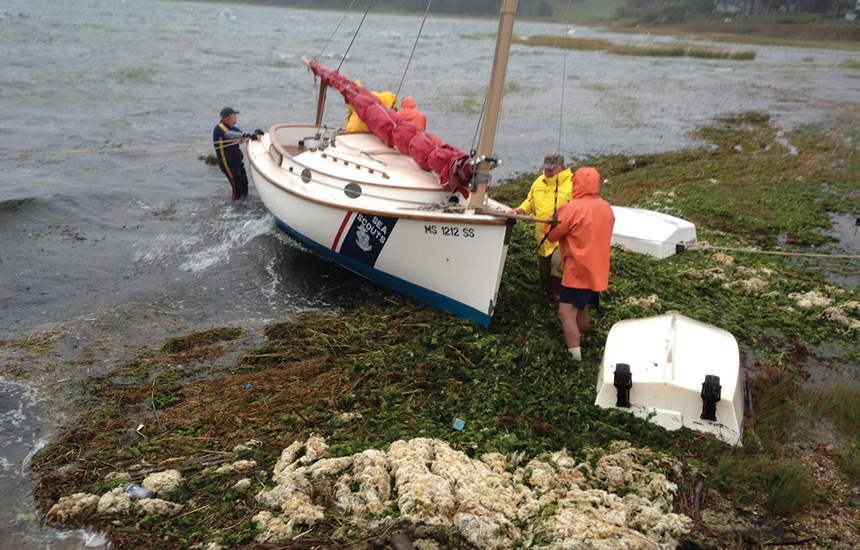 On 1 Oct. 2015, Ol’ Gaffer broke free and drifted ashore at the Orleans Yacht Club, landing unscathed on sand and seaweed 10 feet from a rock revetment. It would take a week of determined labor to rescue the classic cat and keep it from breaking up on the rocks.

Alerted to impending disaster by Ship 72 consultant Arthur Jalbert, who spotted the boat adrift from his home near the yacht club, the ship chairman John Crawford, Cape Cod Sail & Power Squadron/14 member and ship skipper Dean Skiff, and OYC Rear Commodore Steve Tenczar rushed to the scene. Cold and exhaustion threatened to overwhelm them as they battled 29-knot winds, gusting to 39, in chest-deep water. They wrestled Ol’ Gaffer away from the rocks, set two anchors and tied a long line to a dock.

A plea for help mustered 13 Cape Cod Squadron members. Braving miserable storm conditions, they met the next day at high tide, manhandled the boat into an adjacent salt marsh and, obeying the Boy Scouts motto “Be Prepared,” secured it with five anchors.

When extraordinarily high tidal surges receded several days later, the vessel rested high and dry on the marsh. On day six, John, Dean and I readied the stranded catboat for towing off the marsh on the next day’s high tide. To lighten the boat, we attached heavy tow lines; off-loaded sails, boom, rudder and 286 pounds of lead ballast; and pumped the bilge dry.

As the sun set at the end of another hard day’s toil, two friends of Ship 72 with salvage experience, Rich Berube and Lenny Arsenault, showed up. “I think it will move,” Rich said. In the near darkness, the image was a tableau of brute force. Relying not on modern technology but the archetype of primitive caveman technology, the two men employed lever and wheel: A 10-foot four-by-four served as the lever, and 4-inch PVC pipes and large boat fenders became wheels. Rich and Lenny carefully jacked the boat up and placed the PVC pipes and fenders under the keel. In the pitch-black night, we finally eased the boat into the water and tied it fast to the dock overnight.

What a pleasant surprise for the seven squadron members who returned at high tide the next morning expecting to tow the boat off the marsh to see Ol’ Gaffer afloat at the dock. The warm, beautiful clear day was perfect for motoring and guiding the catboat onto a trailer for a long winter’s lay-up.

P/C Lee R. Johnson, SN, of Cape Cod Sail & Power Squadron/14, teaches America’s Boating Course and serves as assistant treasurer and parade coordinator. He grew up on the New Jersey shore and has been in boating for more than six decades. While attending and after graduating from the U.S. Merchant Marine Academy, he crewed in many regional and ocean yacht races. He is a teaching and fleet maintenance consultant for local Sea Scout ships 72 and 76.