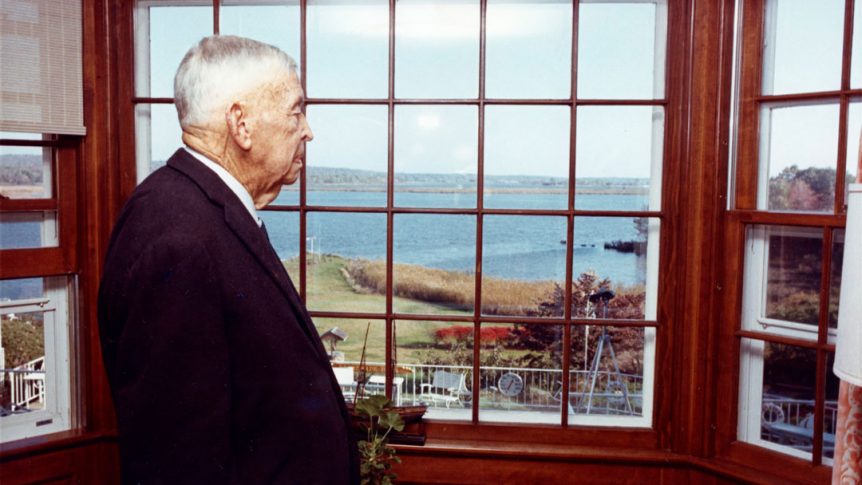 According to Charles F. Chapman, a past chief commander and one of our founding fathers, United States Power Squadrons was founded to prove that small motorboats with educated captains deserved a place on our nation’s waterways.

In a 1972 interview in The Ensign magazine, Chap said that the board of steamboat inspectors who governed navigation in 1914 was a group of “very old seagoing men” who “had no use for small internal combustion-powered craft.”

United States Power Squadrons was formed, he said, to instruct members on the rudiments of boat handling and remove one objection the board had to these small craft.

Every year we honor Chap’s legacy and the mission of United States Power Squadrons with the Charles F. Chapman Award for Excellence in Teaching.

During the 2020 Annual Meeting in Ponte Vedra Beach, Florida, three instructors—Jim Zeigler, David Smith and Gary Mandarano—received the 2019 Charles F. Chapman Award for Excellence in Teaching. Join us in congratulating them on this achievement and their day-to-day accomplishments of making our waterways safer one boater at a time. 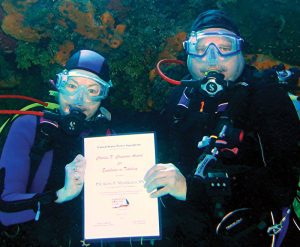 Unable to attend the annual meeting, Gary Mandarano receives a laminated copy of his Chapman Teaching Award during a dive trip he and his wife, Barbara, took to Cozumel, Mexico, for their 37th wedding anniversary.

Gary has taught America’s Boating Course, Seamanship, Marine Electrical Systems, Engine Maintenance and others. He started teaching the Seamanship chapter on hull type and stability shortly after taking the course himself. Not long after, he became Seamanship chair and has been teaching the course ever since, often in his home. At the end of the course, he takes students out on his boat to reinforce the lessons learned in class.

Myra Bellamy, who has been a New York City public school teacher for 20 years, met Gary when she and her son, Jason, took ABC and Seamanship in 2019. Myra commended Gary’s enthusiasm and teaching skills. “His demonstrations were not only fun to engage in but were hands-on and student-centered—all hallmarks of good pedagogy.” As novices, Myra and her son felt lucky to have someone like Gary to introduce them to boating.

“Gary’s passion for teaching is reflected in how he helps his students learn a variety of concepts,” writes Franz Alvarez, who lauded Gary’s use of award-winning teaching aids to introduce students to practical hands-on skills.

Jeffrey Taylor, a former Coast Guard-licensed first mate on Mississippi River towboats, didn’t think Gary would have much to teach him. Jeffrey revised his opinion after taking Gary’s Seamanship class. “Using many examples from his own experience in his motorboat on Long Island Sound, Gary emphasized the gravity of a private boat owner’s responsibility and the need for individual initiative, independence and integrity for safe boating.” When he was done with the class, Jeffrey saw pleasure boating as a discipline, something he could continue to improve upon during his lifetime.

Gary encourages newer instructors to observe their students as they teach. “Not all students learn the same way; some learn by watching, some by reading and study, and some by hands-on practice. Try your best to reach all of your students by using a mix of techniques.”

After years of teaching Seamanship, I find that many of my best and dearest friends are people I met from teaching a course. The relationships that I have developed here are priceless.
–Gary Mandarano 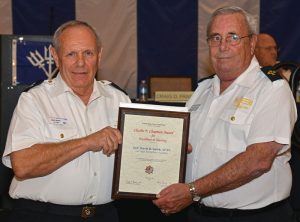 Having been an instructor nearly as long as he’s been a member, Dave has taught America’s Boating Course, Seamanship, Piloting, Advanced Piloting as well as many seminars. He also teaches Operations Training, vessel examiner training, first-aid instruction and Instructor Development.

A believer in the power of education, Dave teaches an Operations Training class to each new bridge and encourages students to take classes after passing America’s Boating Course.

William Bradley, Las Vegas Squadron Commander, took America’s Boating Course with Dave before joining the squadron. “He knows his material very well, is easy to listen to, always has an educational joke to keep you on your toes and is great at answering questions when you didn’t get it the first time.”

Fellow teaching colleague and a former student, Richard Soule writes that Dave imparts the importance of learning to students. “I have observed that Dave’s teaching appears to instill in each student not only the importance of safety concepts, but he also seems to stimulate his students to go out and share knowledge and experience with others while enjoying their own boating adventures,” Soule writes, adding that students share similar stories. “Picture, if you will, a pre-departure briefing for the family of a former boating safety student of Dave’s—one in which Dave’s words and phrases, his safety concerns and even his jokes are repeated to friends and loved ones prior to their day on the water as a way to ensure the safety of each guest.” Soule says that every ABC instructor dreams of having his or her teaching resonate so strongly that students share what they’ve learned with the next generation of boaters.

Dave’s desire to educate boaters has brought him in contact with many state agencies, including the Nevada Department of Wildlife. A boating education coordinator for NDW, Nick Duhe writes that he met Dave while he was doing a vessel safety exam at a Lake Mead boat ramp. “I took note of how thorough he was during the exam, and the rapport he had with the boater was exceptional.” That rapport, Duhe says, is something he tries to emulate when interacting with boaters.

When asked what advice he’d give new instructors, Dave Smith said, “Make use of individuals with unique expertise that will round out your instructional efforts.”

When a young or older boater can demonstrate back to me an understanding and performance of a boating technique that I have presented, even when they need to present the technique more than once, I am rewarded in knowing the goal of a knowledgeable and safe boater has been achieved. –Dave Smith 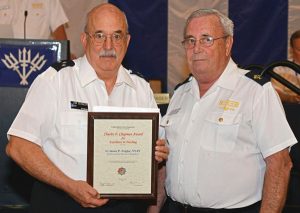 Michael Silvay, a fellow instructor who took Weather under Jim, writes that he made each topic crystal clear before moving on, ensuring that the class had a good understanding of the complex material. “I am a boating instructor and an experienced captain,” Michael writes, “but I still consider Jim Zeigler a mentor and a ‘go-to guy’ when it comes to any boating questions.”

Fellow instructor Dave Childress says Jim’s friendly, open demeanor and encouragement make him a popular instructor who is responsible for many students joining the squadron. “Underway, Jim has graciously allowed students to pilot and steer his trawler Tortuga,” Dave writes, “invariably encouraging them to ‘come try it,’ with the result of producing more active members of our boating community.”

Junior Navigation student David Duros had trouble mastering sextant operation, so he asked Jim for help after a squadron meeting. “Jim was able to find the flaw in my technique quickly and demonstrate the correct way,” which, Duros writes, turned a difficulty into an ability.

Many members recounted how Jim created a nautical-themed “Jeopardy!” game for a District 5 Spring Conference, complete with lights, buzzers and enthusiastic audience participation.

When asked what advice he’d give other instructors, Jim said, “Be honest with your students. If it’s your first time teaching a course, let them know. Your job as a teacher is to guide your students through the material. You do not have to be the smartest person in the room, just the one with the logical path to build the knowledge.”

For me, the most rewarding part of teaching comes from seeing the students apply what they have learned and have a more enjoyable time on the water. –Jim Zeigler