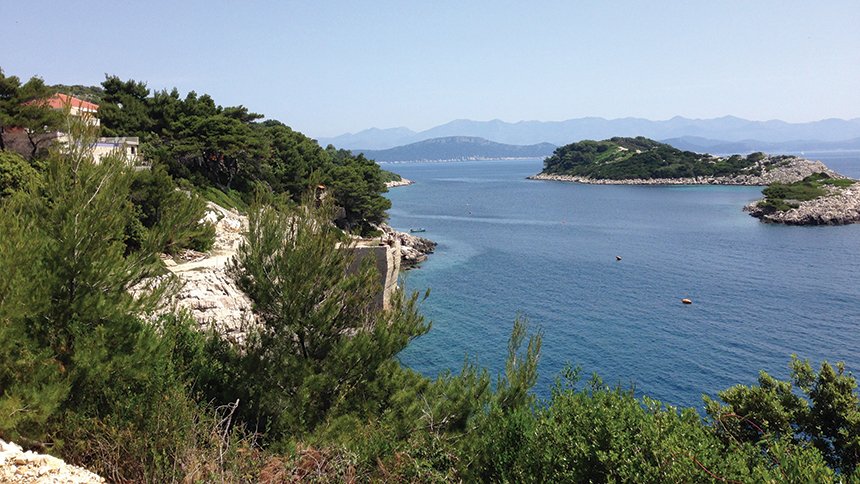 “Why?” I’d wondered when Nancy told me that our group of sailor friends wanted to go to Croatia on holiday. I only had half-formed notions about Croatia and its people, but I should have known the “why” was typical sailor stuff.

The reasons included a long archipelago of sparsely inhabited Mediterranean islands; miles of beach, rock, vineyards, forest, palm trees, farms and olive groves; the southern Adriatic’s clear waters; and the generous people sustained by its riches. Mostly, it had to do with history and sailing with sun, wind and stars.

It took about two years to get all six of us organized and ready. Although we had experienced sailors among us and had all chartered around the globe, none of us had any of the certifications required by Sunsail, our charter company. One of us had to complete an International Certificate of Competence assessment form. If you plan to charter, get a head start on the sailing license requirement. Sunsail’s website clearly explains everything, and the company was responsive when we called. We had no other issues. All arrangements were professionally handled without a hitch.

Besides the typical array of travel books, a helpful resource for planning our trip was “777 Harbours and Anchorages.” When we arrived and picked up the boat, we found that Sunsail had provided a copy at the navigation table as well.

You’ll also need to decide whether you’d prefer to depart from a northern, more developed tourist port like Split or from a southern port such as Dubrovnik. We decided to depart from Dubrovnik, a UNESCO World Heritage site, and explore the southern islands we could reach from there. The southern islands included Mljet (the entire island is a national park), Lastovo (site of the Archipelago Nature Park) and Korčula.

On our second day, we anchored at Polače harbor on Mljet in a bit of wind. We set anchor and found ourselves meeting the sailors on the boat anchored next to us when both vessels swung in a 90-degree wind shift. Sailors in this part of the world would be wise to study the Adriatic’s common winds: the Mistral, the Sirocco and the Bora. Wind, anchorage and harborage information is commonly available, and you will have ready access to specific weather reports, including daily internet updates and broadcasts. Since everyone on the islands relies on the sea, weather predictions and advice are easily obtained and usually posted publicly.

The next morning I decided to go on a run to see the north end of Mljet Island. The rain began as I stepped onshore, and I hunkered down for a run up a long forested hill. The rain began to ease as I reached an open switchback some distance from the anchorage. I pulled down my hood and was taken aback by the natural beauty that surrounded me. The water in the lagoons was clear, and I could trace the bottom for some distance in either direction. The small beaches and anchorages were private and inviting, and I could see smaller islands all through the archipelago. I ran farther and reached the island’s salt lakes. Groups of people were already there, enjoying the rain and swimming in the water. As I left, I could hear the laughter and feel the pure enjoyment that accompanied their morning swim.

We had planned to eat at local restaurants, which we did most of the time. With fresh produce, local olive oils, olives, fresh truffles, and other earthly delights always available, we were encouraged to cook a few meals on board, such as fresh asparagus and prosciutto risotto with truffles. But eating at local bakeries and restaurants at our anchorages was one of the highlights of our adventure. Fresh fish was always available and shown to us at the table. Restaurant chefs came to our table and offered local foods. They often served starters without cost. Everything was fresh and local at traditional restaurants like Konoba Antika at Polače. Food was prepared on order and reasonably priced. We avoided those few restaurants that were obviously catering to tourists and priced accordingly. At Saplunara, we ate at Franka, where we were treated to freshly prepared chickpea soup, fishes, sardines, salads and strawberry cake. The local wines were excellent. On our fifth day, we anchored at Trstenik, known as the Port of Wines, on the Pelješac Peninsula. Local vineyards and tasting rooms were everywhere, as were olive oils. That evening we enjoyed an outstanding seafood dinner at Vitaceae Restaurant.

We returned to Dubrovnik and spent an extra day in Old Town, which was worth every moment. Besides the embedded cultural experience and the visible history of centuries of human habitation, we were surrounded by our own: kayakers, swimmers, small boats, windsurfers, and the rich voice of the sea against the walls of the old city.

A retired educator, Walter LaMendola considers himself fortunate to have talented sailors like his Croatia shipmates as friends. He and Nancy own a J22 with friends and enjoy racing at Carter Lake in Colorado. Cruising faraway destinations with friends is a rare opportunity to explore solitude and community, history and human circumstance. This article first appeared in Boulder Beacon, the newsletter of Boulder Valley Sail & Power Squadron/30.