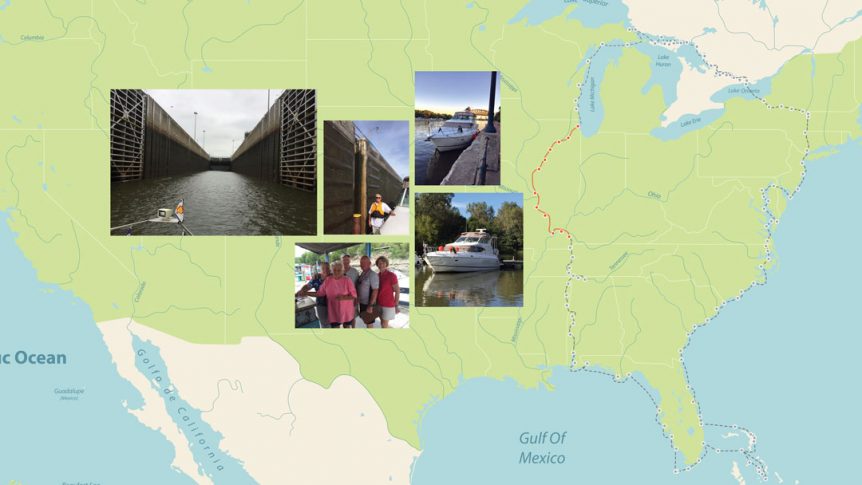 Our Great Loop adventure took one year and covered 6,500 miles. We departed from Waukegan Harbor in mid-September 2015 and, after making a series of left turns, returned to Waukegan Harbor in September 2016. Our crew consisted of John and Priscilla Simons and Dale and Andy Arnold. Our adventure had been nearly five years in the planning, but yours can happen much faster. All we had to do was research and buy a motor yacht, learn to operate it, retire, and decide how we would handle our individual homes while on our adventure.

We knew the Great Loop would present us with new challenges as we cruised down the inland rivers from Chicago, Illinois, to Mobile, Alabama; across the Gulf of Mexico to Florida; spent time in Key West and the Bahamas; cruised up the Intercoastal Waterway to New York; headed up the Hudson River to the Erie Canal and Canada; cruised through Georgian Bay, the North Channel and Lake Michigan; and headed back home to Waukegan.

Hundreds of “Loopers” make this trip each year. There’s even an America’s Great Loop Cruising Association, which conducts seminars to help Loopers prepare for the adventure. We flew our white Great Loop burgee to help identify us to other Loopers during our travels. We were fortunate to receive guidance on route planning from Bruce Astbury, a long-time boater and delivery captain. Bruce had made the trip numerous times and could rattle off the names and distances of the best marinas and fuel stops along the rivers from memory. We took copious notes. 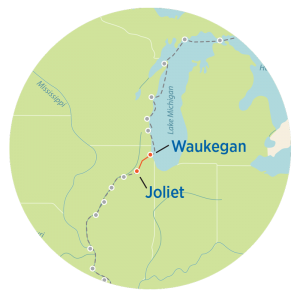 We entered the Cal-Sag Channel at Calumet and traveled to the Illinois River. We transited two locks and had to wait for several bridges to open. On our first day, we traveled 100 miles and tied up on the wall in Joliet for the night. We chose the Cal-Sag Channel because the air height on our Cruisers 4450 was 17 feet 6 inches. We couldn’t start on our adventure on the Chicago River, because there’s a 17-foot fixed bridge. Farther down the Illinois River past the confluence with the Cal-Sag Channel, sits the fixed height Burlington Northern Santa Fe Railroad bridge. It has a controlling height of 19 feet 1 inch, the lowest on the entire loop. Don’t attempt to do the Great Loop in a boat with an air height greater than 19 feet 1 inch. 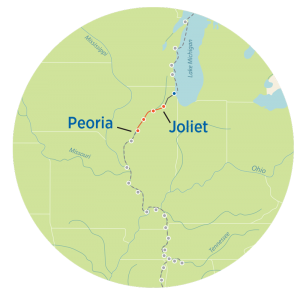 Day two started out bright and sunny with no wind and stayed that way all day. We had delays at all three locks: Brandon Road Lock (40 feet), Dresden Island Lock (35 feet) and Marseilles Lock (25 feet). Delays are common and should be expected. In all three cases, we were locked through faster than the lockmaster’s original estimate.

There’s not much to see after leaving Joliet other than natural riverbanks and an occasional barge depot, duck blind and railroad bridge. We took advantage of our boat’s ability to cruise at 25 mph to get to the next bit of civilization. Many Looper boats have a top speed of 8 or 9 mph. We were pleased to have the option of going faster. No wake signs are posted in various locations, and we always slow down as we pass. You can tell you’re traveling at the proper speed if you get a friendly wave from the barge crew.

Next, we stopped at Heritage Harbor Marina, a Looper-friendly marina providing slip and fuel discounts. The relatively new marina has a nice restaurant and a friendly, helpful staff. We spent two days there and borrowed the marina’s courtesy car to visit Starved Rock State Park. After all, it’s the journey, not the destination.

The next day started with a flurry of activity: boat cleaning, filling the water tanks, fueling and pumping out. We called the Starved Rock lockmaster by phone to determine the waiting time at the lock. After several busy signals, we decided to depart the marina at 10:30 a.m. A few miles down-bound, we passed a tow also going down-bound. We gave him the courtesy of not trying to pass him while going under a bridge. Knowing that commercial traffic gets priority locking through, we sped up. The tow was going 3.5 mph, and we were going 25 mph. We arrived at the lock with enough time ahead of the down-bound tow to be green-lighted through within 15 minutes. We had also arrived with just enough time ahead of an up-bound tow.

From there, we traveled 46 miles to the rustic Henry Harbor Marina, which consists of the old Henry lock’s walls. We were glad to have our large orange teardrop fenders to hold us off the jagged walls.

We departed Henry at 9:30 a.m. and cruised 38 miles to Peoria. We passed two up-bound tows along the way. The weather continued to be sunny and dry. We arrived in Peoria at 1 p.m. and fueled up at the Illinois Valley Yacht and Canoe Club. The harbor entrance is narrow with tight quarters to maneuver.

Peoria’s public dock has many small slips and three long face docks. We took the face dock in front of the paddlewheel boat Spirit of Peoria. The signage states all boats must depart by 11 p.m. Our Looper friends advised us that the curfew isn’t enforced, so we decided to take our chances. Our only other option to avoid barge traffic would be to anchor on the other side of the river. We spent a quiet night on the dock.
We visited the Peoria farmers’ market and craft fair before shoving off at 11 a.m. We caught a break at the Peoria Lock, which had dropped its wicket dam, and cruised over the dam without having to stop. The Illinois River continues to be almost entirely rural with the occasional barge depot and railroad bridge. We traveled 42 miles to the Havana, Illinois, regional port and stayed at the Tall Timbers Marina.

We caught up with several other Looper boats: Azumit 54, a new Sea Ray Sundancer 48 and Grand Banks 42. The Tall Timbers Marina has a lot of pride in ownership, top-notch facilities and a cash-only policy.

Cruising on the river is as flat if not flatter than riding in a car on the highway. The water is dead calm, and our boat glides along at 25 mph. We slow down for all fishing boats and working tows because we throw off a huge wake. Every time we speed up, we can hear those turbo diesels whine. 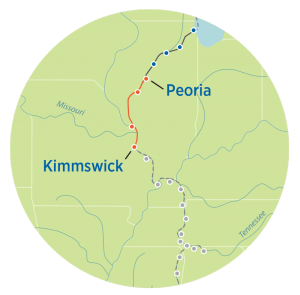 After leaving Tall Timbers Marina, we cruised to Grafton, Illinois, on the confluence of the Illinois and Mississippi rivers. Grafton proclaims itself the Key West of the Midwest. You’ll have to decide for yourself if that’s true.

We arrived at 4 p.m. and pulled into the fuel dock to fuel up and pump out. After docking on the end of a covered dock just past the fuel dock, we discovered a disadvantage of being in a covered slip: Our satellite TV dish did not work. Once again, we caught up with several Loopers, some we had not seen since Joliet.

Next, we traveled 62 miles to Hoppies Marina, the last place to fuel up for over 200 miles, until we went up the Ohio River to the Cumberland River and stopped at Green Turtle Bay. With seven days and 333 miles behind us, we were at mile marker 0 on the Illinois River and mile marker 220 on the upper Mississippi River.

Traveling south from Grafton, we passed the famous St. Louis Arch as we headed to Hoppies Marina. You must always call ahead and get permission from the owner Fern Hopkins to spend the night. She runs a tight ship.

Operating a marina on the Mississippi River is challenging, as the water level rises and falls significantly. Hoppies Marina consists of a series of empty barges attached by cables to trucks on the upper bank. When the river rises, the trucks are backed up to take up the slack in the cables and when the water level drops, the trucks are moved forward. Simple yet ingenious.

As we cruised the rivers, we were glad we installed AIS on our boat. We could see barge traffic coming up-bound as we went down-bound. The rivers have many twists and turns, and without AIS, we wouldn’t know about the tow until we were very close. The towboat captains could also see us, and we could call each other by boat name on VHF channel 13. Towboat captains will often request a one-whistle or two-whistle pass. The hail indicates the maneuver by the following signals on her whistle: one short blast means “I intend to leave you on my port side”; two short blasts means “I intend to leave you on my starboard side.” Towboat captains have intimate knowledge of the rivers and can help keep you from running aground as you pass them in narrow sections.

Nearly every Looper stops at Hoppies since it’s the only fuel stop on this section of the Mississippi River. It’s 62 miles from Grafton to Kimmswick, Missouri, and another 220 miles to the next fuel stop at the Green Turtle Bay Marina. As an added benefit, Fern provides an update on river conditions, obstructions and best anchorages for the remainder of your journey on the Mississippi. We stayed two nights at Hoppies and spent the day visiting the tourist mecca of Kimmswick. 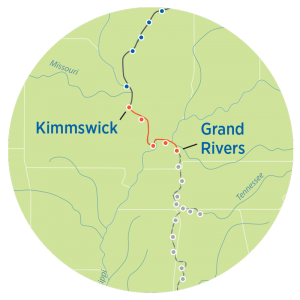 The next day was our last day on the Mississippi River. We cruised 46 miles down-bound and anchored on the east side of the Mississippi in an area called Boston Banks near Cairo, Illinois. We hailed a passing towboat captain and asked him if we would be out of the way of barge traffic. He advised we would be safe. Anchoring on a river is relatively simple because the current orients you parallel to the shore, and there are no tides to swing you around.

As we turned up-bound on the Ohio River, we lost the 3 mph favorable current and had a head-on current of 2 to 3 mph, which had a significant impact on our fuel burn. After our cruise, the town of Paducah, Kentucky, built a public dock, which would be preferable to anchoring overnight on the Mississippi River.

We cruised up-bound 38 miles and transited lock #53 passing over the lowered wickets. As we approached the Olmstead lock #52, the lockmaster advised no traffic could pass due to strong turbulence created when the wickets were lowered. We had noticed the riverbanks were lined with barges stuck to the shore waiting to pass through the lock. We searched around for a place to anchor out overnight. We found a spot with 10 feet of water on the north side of the Ohio River in Metropolis, Illinois.

Winds howled out of the northeast, but we were protected by the high riverbank and a stand of trees. The next morning, we awoke to see the barge traffic had moved on overnight, and we were free to pass through the Olmstead lock. We had 17 miles remaining on the Ohio River and 32 miles on the Cumberland River to get to Green Turtle Marina.

We cruised up the Cumberland River to the Barkley Lock, a 57-foot lift to Lake Barkley. Only a mile past the lock, Green Turtle Bay Marina was a welcome sight after three days on the hook.

In the next issue, we’ll chronicle the remainder of our time on the rivers as we travel south to Mobile and the Gulf of Mexico. We found Skipper Bob’s book “Chicago to Mobile” to be an excellent resource.

John Simons is a member of Waukegan Sail & Power Squadron in District 20. He has his USCG Masters License 100 ton. In 2015–2016, John and his wife Priscilla cruised 6,500 miles on America’s Great Loop aboard their 2002 Cruisers 4450 Motor Yacht Changing Latitudes. John is a yacht broker with weberyachts.com. His blog is at bit.ly/CFJGreatLoop