Don’t forget to read part one and part two.

We entered Mobile Bay on Nov. 1, 2015—the first day our insurance rider allowed us to be in the Gulf of Mexico due to hurricane season. We had completed the first segment of the Loop, Chicago to Mobile, having cruised 1,460 miles and purchased 1,633 gallons of diesel fuel.

Now in salt water with tidal changes, we entered Mobile Bay greeted by two dolphins swimming in our wake. Hundreds of pelicans and seagulls chased the shrimp boats. We cruised south down the wide, shallow bay and turned east to go to Fly Creek in Fairhope, Alabama.

We stopped at Eastern Shore Marine, a working boatyard not a marina, to get our oil changed. With the channel open to the west, the slip is lumpy. However, the cast of characters the place attracts makes it interesting. 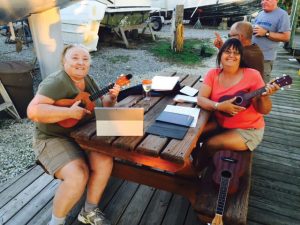 Priscilla and Jeanne jam on the ukes at Fly Creek.

Jeanne from Knot Now came over with a ukulele while I was playing mine on the afterdeck. She’d inherited the instrument from her father, who had passed away recently. She’d been practicing so she could play “Amazing Grace” for her mother when they spread his ashes in the ocean. She heard another ukulele after she stopped playing and eventually figured out it was me. Priscilla grabbed her ukulele, and the three of us had a little jam session.

The maintenance work went well. The yard changed the boat’s engine oil and filters, the generator oil and filter, the zincs in the engine and generator, and the transmission fluid.

Work on the blowers didn’t go as well. They needed to be replaced, which delayed our departure two days. Instead of cruising to Pensacola on Sunday, we would depart on Tuesday.

After seven days in Fairhope, we cast off, cruised south on Mobile Bay, and entered the Intracoastal Waterway. We stopped briefly at Pensacola, Florida. Since we were chasing a weather window to cross the Gulf to Tarpon Springs, we decided to make a long run outside the ICW from Pensacola to Port St. Joe.

As we blasted east at 25 mph along the Florida Panhandle, the starboard engine transmission malfunctioned. The engines throttled down and back up on their own. When we arrived at the Port St. Joe Marina, the starboard engine stalled. We went to the fuel dock using the port engine and bow thruster. After fueling, we put the starboard transmission in neutral and started the engine. The boat lurched forward. We tried again with the same result. This was one of those crystalline moments when you are genuinely happy to have a boat partner. Three weeks and $15,000 later, we had a new ZF transmission installed. In the meantime, we became experts on Port St. Joe.

To pass the time until we could cross the Gulf, we took long walks twice a day, went to the Port St. Joe Salt Air Farmers Market and wandered around gift shops.

We spent a lot of time cruising in our dinghy, an 11-foot Avon center console (steering wheel and controls) with a 40-horsepower Mercury engine with electric start and tilt. The dinghy also has an electric bilge pump and navigation lights. We didn’t put our boat name on our dinghy for security reasons. When the dinghy is at the dock, the boat name could alert potential thieves that the anchored boat is unoccupied.

As we waited for repairs, we learned how few comfortable days there are for crossing the Gulf—five to six days each in November and December.

Good crossing conditions for me are average winds of 13 knots or less and average wave heights of two feet or less. The forecast conditions must be stable and sustainable during the entire 20-hour crossing, and at least three online weather sources must match.

With no suitable weather window available, Loopers began to stack up at the marina. As the days dragged on, more and more Loopers came.

It was wonderful to see so many friends again.

With Thanksgiving fast approaching, we were contemplating roasting a small turkey in our microwave convection oven when a local sailor invited us and 40 other Loopers to Thanksgiving dinner at his home. We will always remember this magical event.

When the transmission work was completed, we took Changing Latitudes to the fuel dock to pump out and then headed out on St. Joseph Bay for sea trials. It was a treat to hear the engines run and the turbos whine for the first time in over two weeks. We brought Changing Latitudes up on plane, ran at 28 mph for 10 minutes, turned around and ran at speed on the way back. Everything worked as advertised. We’d be ready to cross the Gulf as soon as we got a weather window. 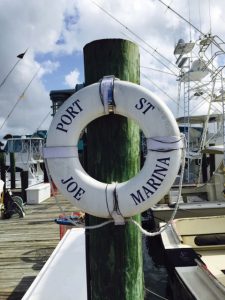 When crossing the Gulf, you can make a fast crossing or a slow crossing. The fast crossing at 18 mph or more allows you to cross in daylight.

The slow crossing,8 to 9 mph trawler speeds, takes all night. If you make a night crossing, don’t plan on arriving in Tarpon Springs before 10 a.m. If you try to enter before then, you won’t be able to see the thousands of crab pots in and around the channels with the sun in your eyes.

Running over a crab pot causes the rope to get caught in your propeller, which can stall your engine and bend your shaft. We have rope cutter blades on our shaft, which means the rope cutter should do its job if we run over rope. If it doesn’t do its job, we’ll find out.

At 10 p.m., we headed out into the Gulf with our buddy boat Reflection in the lead. The crew turned on its aft deck spotlights to make the boat easy to see. At 6 a.m. I hailed Reflection on the VHF radio to let them know we were diverting from their course and heading to John’s Pass, which is south of their entrance to Clearwater. (I didn’t want them to think I fell asleep at the wheel and headed off course.)

After entering the ICW, we went to a marina near Indian Rocks Beach, Florida, a lively town with lots of bars and restaurants, steel drum music filling the air, and festive Christmas lights displayed everywhere. We fueled up, taking on 348 gallons of diesel for $749. This was another time when it’s good to have a partner on the boat.

The next morning, I put on my dive mask and went under the boat to check the props and shafts. Either we did not hit any crab pots or the line cutters did their job. Everything looked good.

The next day we headed south, traveled the 8 miles on the ICW to John’s Pass, went out into the Gulf for 55 miles, and ended up in Venice, Florida. Along the way, we saw many more crab pots than we’d seen coming from Carrabelle.

Our Florida mentor Bill Valters commented, “What you will find on the east coast ICW is that the red cans are always on the ‘land’ side of the waterway. In other words, as you travel south on the west coast, they will be on our left, and as you travel north on the Atlantic side they will also be on our left.”

We took the only available slip at the nice Fisherman’s Wharf Marina in Venice, Florida. It wins the wasted paper award for having a seven-page transient slip agreement.

The next day, we got back on the Gulf headed to Tarpon Point Marina in Cape Coral near Fort Myers. We traveled 39 miles and entered the ICW at Boca Grande Pass, traveling 25 miles to Cape Coral. By traveling on the Gulf, we can enter the ICW south of the Boca Grande swing bridge. The bridge, which opens once per hour, has caused long delays for other Loopers by not opening on time.

Tarpon Point Marina is part of the Westin Cape Coral Resort at Marina Village. We found several bars and restaurants just a few steps away; our favorite, Pinchers, has 2 for 1 happy hour all day and amazing seafood.

A section of the ICW near Cape Coral is called the miserable mile because cross currents make it horrific for sailboats to maneuver in such a narrow channel. From green marker “1” to red “10,” if you’re outside the markers even a foot, you stand a good chance of running aground. Power boaters call it the miserable mile because it’s a crowded no-wake zone due to numerous manatees. 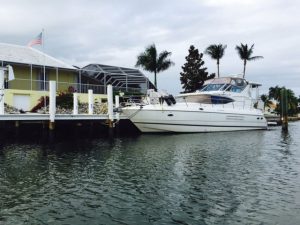 After departing Cape Coral, we cruised 50 miles to Marco Island on Sunday. The ICW does not extend all the way from Cape Coral to Marco Island, so we had to enter the Gulf at Wiggins Pass and reenter the ICW at Naples.

It was a bit more snotty (nautical term) than we anticipated. The winds increased and clocked to the east, giving us waves on the beam in the 2- to 3-foot range, a bit rolly. We were 10 miles offshore on a heading of 180, due south, and headed east-southeast toward shore. Two miles out, the seas flattened to about a foot, so we headed south again.

After 77 days, over 2,000 miles, a busted transmission and unfavorable weather windows, we made it to Marco Island, Florida, the place we had planned to be when we booked our flights to Boston eight months ago. Who says cruisers can’t have a schedule? Priscilla and I flew to Boston to visit our daughter, Alison; her husband, Oscar; and our new grandson, Jackson. It’s nice to get off the boat for extended periods of time and travel home.

When we got back to Marco Island, we took the dinghy to The Esplanade Shoppes, which has upscale shopping and dining and a long dinghy dock for day patrons.

Marco Island has an ordinance prohibiting the discharge of gray water from boats. The gray water is the water from the sinks and shower. Boaters have no way to comply because all gray water discharges over the side, and the city does not enforce the ordinance.

On Monday morning, Dec. 15, we shoved off at 8:30. We cruised at 25 mph, and the engines and transmissions performed perfectly. We had 1- to 2-foot waves off the port bow, but after two hours, the seas flattened to 1 foot or less. After dodging hundreds if not thousands of crab pot buoys, we arrived in Cayo Hueso (Key West) at 1:30 p.m. We had cruised 2,183 miles since departing Waukegan.

We stayed at the Galleon Marina, one of the few in Key West with floating docks. Amenities include a large swimming pool, hot tub, sandy beach, gym, fishing pier and tiki bar with live music. Be it ever so humble, the Galleon Marina was our home from Dec. 15 to Jan. 14.

In the next issue, we explore Key West, South Florida and the Bahamas.

John Simons is a member of Waukegan Sail & Power Squadron in District 20. He has his USCG Masters License 100 ton. In 2015–2016, John and his wife Priscilla cruised 6,500 miles on America’s Great Loop aboard their 2002 Cruisers 4450 Motor Yacht Changing Latitudes. John is a yacht broker with weberyachts.com. You’ll find more of John Simons work on his blog at www.captainfatherjohn.com.