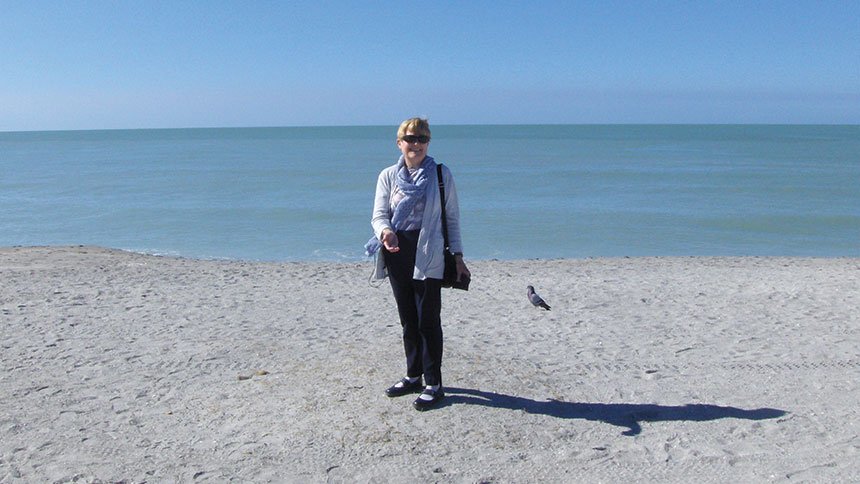 A recent road trip to visit family in Florida took us to Rotonda West, about 50 miles south of Sarasota. Our hosts have a home on a circular canal where bird watching is a daily pleasure. With no outlet to salt water, only a limited number of small boats (pontoons and motorized skiffs) occasionally pass by. Jim thought a kayak would be ideal until his brother advised him that alligators also inhabit the canal.

We did, however, get to kayak when our family took us to nearby Don Pedro State Park for a two-hour kayak paddle to the park’s barrier island, which is accessible only by boat. We walked along the beautiful mile-long beach, which offers some of the best shell collecting I can recall.

On another day, we visited the small town of Boca Grande on Gasparilla Island. To visit this island, we traveled by truck over the Boca Grande Causeway. We inspected the range light and nearby beach before heading downtown for lunch and shopping at some of the nautical-themed shops. We learned that Boca Grande is the “Tarpon Capital of the World” and that after Easter, most tourists depart, and the tarpon fishing boats appear in the marinas.

We enjoyed the island and had planned to return but decided to visit a new place instead. We headed north to Venice, where we explored the beach and collected more shells. We had a delicious fish lunch at a waterside restaurant, with docks for diners arriving by boat.

On our way home, we did get to board a boat when we visited the Ellie Schiller Homosassa Springs Wildlife State Park, famous for its manatees. On previous trips, we had stopped at area seafood restaurants but didn’t have extra time to visit the park. This time we stayed overnight in nearby Crystal River so we could spend most of the following day at the park.

From the visitor center, we took a 20-minute pontoon boat ride to the park. Our ranger provided details about the park’s history and biology. This park features animals native to Florida, except for one elderly hippopotamus who was part of a theme park prior to the transition to a state park. The park’s residents include alligators, black bears, red wolves, key deer, Florida panthers and bobcats. The animals live in the park because they cannot survive in the wild on their own. The bird exhibit area features flamingos, roseate spoonbills, white ibises, egrets, herons, cormorants, pelicans and even two whooping cranes.

From the park’s underwater observatory, you can view plenty of fish and some manatees in the springs. The park presents daily educational programs, and we really enjoyed the one on manatees. Volunteers fed the manatees lettuce and gave detailed information about the gentle, delicate mammals and the dangers boats pose to them.

Christine Wenk-Harrison, a retired counselor, lives near Lake Travis in the Texas Hill Country with her husband Jim. As members of Austin Power Squadron/21, they have enjoyed their small sailboat, but in recent years, road trips and a few cruises have taken them to new destinations.

This article first appeared in the squadron newsletter, The Plotter.