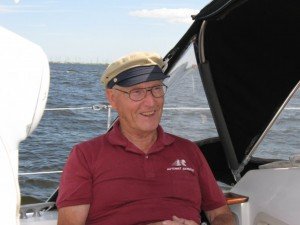 Donald E. Baker passed away on 9 December 2012. He was born on 16 December 1931 in St. Louis, Mo. After serving in the U.S. Army in Japan during the Korean War, Don returned to his home town. He took a job as an usher for Loews Theaters and worked his way up to Vice President of Marketing in New York City until his retirement in 1990. He and his wife Theresa had three children.

Boating was Don’s passion, and he was happiest while plying the waters of Barnegat Bay aboard his 34-foot sailboat Integrity with family and friends. The name he gave his boat also signified the way he lived his life.

Don joined Raritan Bay Power Squadron in 1973. He served as commander, taught courses, and chaired the membership, public relations, and USPS seminars committees. He was District 4’s boating course chair and legislative chair for New Jersey. At the national level, Don served on the Boat Handling and the Government and Partner Relations committees. He also helped develop the new USPS Sail course and authored countless articles in The Ensign. Don was a life member and earned 39 merit marks. A modest man, he believed he was only doing what needed to be done.

Despite his many contributions to USPS, whenever someone needed help, Don was happy to give it. And no matter how busy he was, he always made time for friends and family, and for sailing his beloved boat. Fair winds, Don!