I save old, torn, worn-out American flags. Most years, my husband, Phillip, and I bring the flags to a friend who resides in the small village of Grand Marais, Mich., where they are burned in a solemn ceremony every Fourth of July.

Located on the southern shore of Lake Superior, Grand Marais started as a lumbering and commercial fishing community, but these days the town mainly caters to the tourists who keep it alive.

Aboard our sailboat, the Ojibway Princess, my husband and I had been dodging thunderstorms and foul weather for a couple of weeks on our way to Grand Marais. This year, instead of just dropping off the flags, we planned to observe the ceremony firsthand. With Fourth of July coming up, boaters would be filling the docks and anchorages.

The moving ceremony fit perfectly with the small town and its close community.

We arrived on 2 July and were surprised to find only one other boat at the community pier. After securing the boat, we walked to our friend’s house with our bags of folded flags. Fortunately, she was home, and we had a good time visiting and catching up on local events in this small, undeveloped community.

As we headed back to our boat, we saw the decorated lampposts and notices in the shop windows announcing the Independence Day celebrations. The streets and sidewalks were clean, waste cans were empty, a line of portable toilets stood in the central field, and the locals seemed busier than usual.

The following morning we fueled the boat, topped off our water tank and added a few groceries to the galley. Some locals stopped by to chat about the “big doings” tomorrow.

July 4th brought out blue skies, big puffy clouds and what seemed like everyone in town. Vehicles lining up for the parade included decorated fire engines, floats, tractors, motorcycles and even four-wheelers. Onlookers filled the sidewalks. 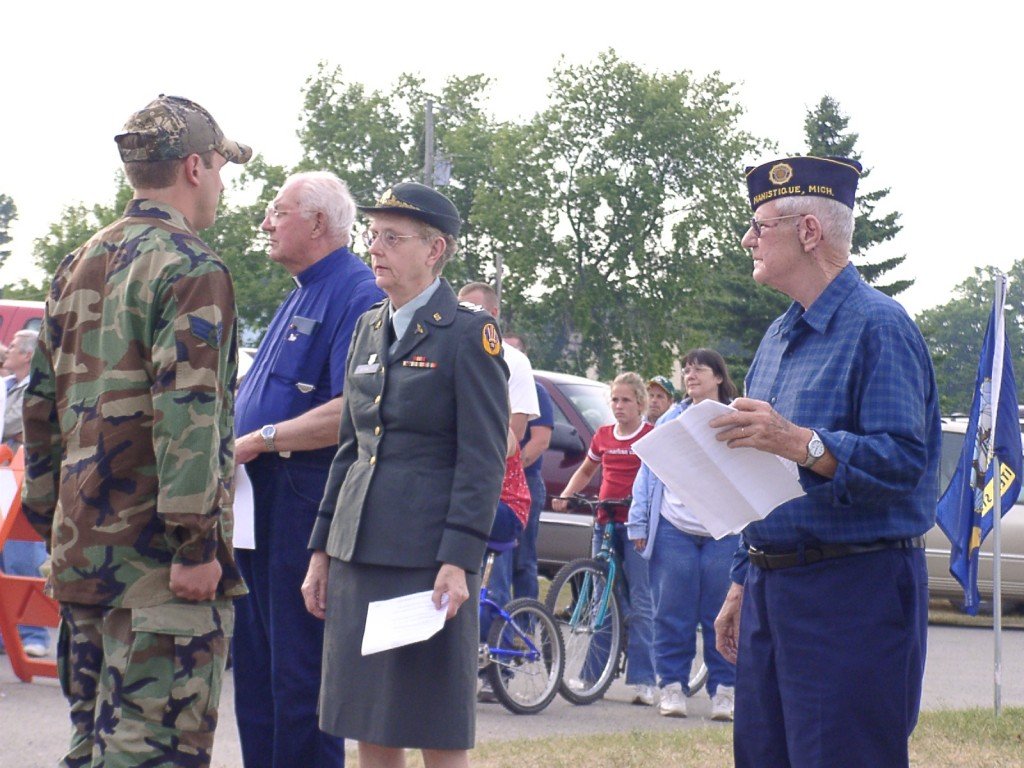 Veterans and other participants prepare for the invocation before the ceremony.

When the church bells struck the hour, the parade started, music blared, and everyone waved—grownups and children alike. This is a small community, so the parade went around the block three times. Dressed as a piper, our friend, accompanied by drummers, played typical Revolutionary-era music. A big truck rolled by with people tossing out candy and frozen ice pops to the onlookers. The little kids grabbed the candy, and the big kids, including me, grabbed the ice pops.

After the parade broke up, the flag burning ceremony began at the war memorial in the park. Many people wore military uniforms, including our friend, who had served in Desert Storm and retired as a full-bird colonel. The moving ceremony fit perfectly with the small town and its close community.

After the ceremony, we headed back to the boat, and the crowd seemed to follow us. We had a front row seat as two men got on a snowmobile. The passenger carried a large American flag on a pole. Off they roared, down the beach and out into the water. They circled the harbor twice before driving back on the sand. Evening brought two things: fog and the big fireworks show. As the evening progressed, the crowds grew, congregating along our pier. The fireworks began at around 2230. I had never seen fireworks in the fog, and the light radiating into the mists looked almost ethereal. The crowds oohed and aahed at each display. The multicolored fireworks silhouetted the moored boats, and the finale brought forth a barrage that ended the show in a blaze of glory.

The next morning, I understood why our boat had been alone at the pier. The fog had captured the smoke from the exploding fireworks, leaving a grimy, oily film on the boat and inflatable. After giving our sailboat a good scrubbing, we departed Grand Marais with many good memories.

Boni Thibert, SN, and her husband, Philip Thibert, SN, of Toledo Sail & Power Squadron, have sailed Lake Superior aboard Ojibway Princess for more than 20 years. They spend summers living aboard and winters on Neebish Island in the Saint Mary’s River in Michigan.