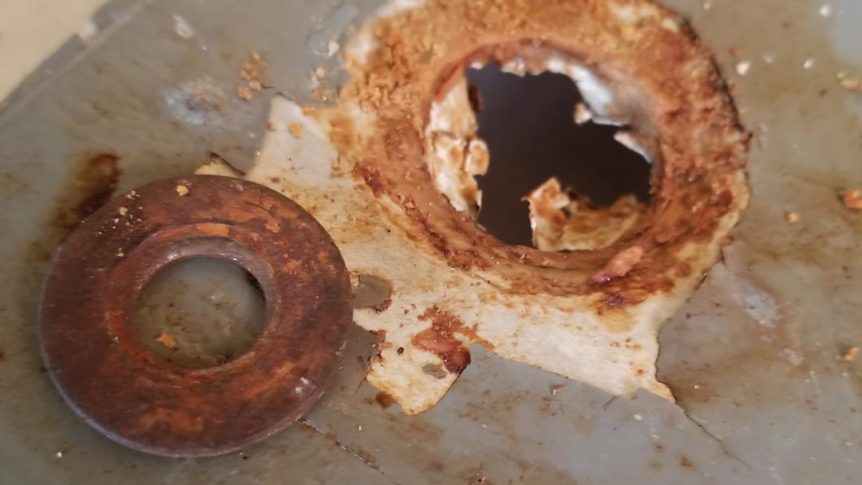 Would you believe that a stainless steel washer could cause an estimated $20,000 in damage to your boat? That was an estimate given to remove and repair my diesel fuel tank.


Earlier this year, my wife, Karen, and I were on our 1983 twin diesel Atlantic 30 in Sneads Ferry, North Carolina, when I saw a sheen of diesel on the water. Further investigation revealed a leak in the port fuel tank.

I had repowered with new engines and new 100-gallon aluminum fuel tanks just eight years earlier. When I started the port engine to determine the location of the leak, fuel sputtered out near the rear. I was relieved as the rear of the tank was the only place that had room to make the repairs.

I found instructions online for repairing an aluminum fuel tank and ordered a Fuel and Metal Tank Repair Kit from JB Weld. Before heading home, I pumped fuel into the starboard tank, pumped the remainder into 5-gallon fuel cans, and cleaned diesel from the bilge.

Scoping out the problem

On our next trip down to the boat, our son brought his bore scope camera. It has a long, flexible extension that transmits the view to his cellphone. We raised up the rear of the tank to search for the leak but couldn’t find one in the tank’s last 24 inches. This meant the leak was farther forward where it would be impossible to gain access for a repair.

Examining all the options

I began to look at all possible options.

Option 1: I contacted two boatyards, including the one where I had the engines and tanks replaced. To gain access and remove the tank, the work would entail removing the sliding glass door at the rear of the boat, the dinette seating, air conditioner, galley, floor panels, generator port engine. Then they would remove and repair the fuel tank and put everything back together. The estimate from both boatyards was close, $18,000 and $20,000. Yikes! That option was definitely out.

Option 2: Someone at the marina wondered if the side of the hull could be cut to allow access to the fuel tank. I didn’t like that option as the cut would be near the waterline, and I was leery of repairs in that area.

Option 3: Sell the boat for a loss. We love our boat and definitely didn’t want to sell it.

Option 4: Cut the tank and remove it piece by piece.

I chose option 4. I ordered an electric nipper for $840 that had the capacity to cut 10-gauge aluminum. A nipper is like an electric hole punch that punches out pieces as you move the tool. I also bought an electric circular saw with several metal-cutting blades. This wasn’t going to be an easy task because of the confined space, awkward work area and the summer heat.

It took me 28 hours over several days to cut the aluminum into small enough pieces to be removed through the engine hatch.

Midway through cutting the tank, I found the area where the leak occurred. After cutting and removing that section, I found the culprit: a stainless steel washer, underneath where the tank had been.

How could a washer create a hole in a fuel tank? It was caused by galvanic corrosion, in which two dissimilar metals come in contact with one another in a saltwater environment.

I don’t know how the washer got under the tank, but it probably fell under while the tank and engine replacement were underway. After eight years, the galvanic corrosion ate through the 10-gauge aluminum tank.