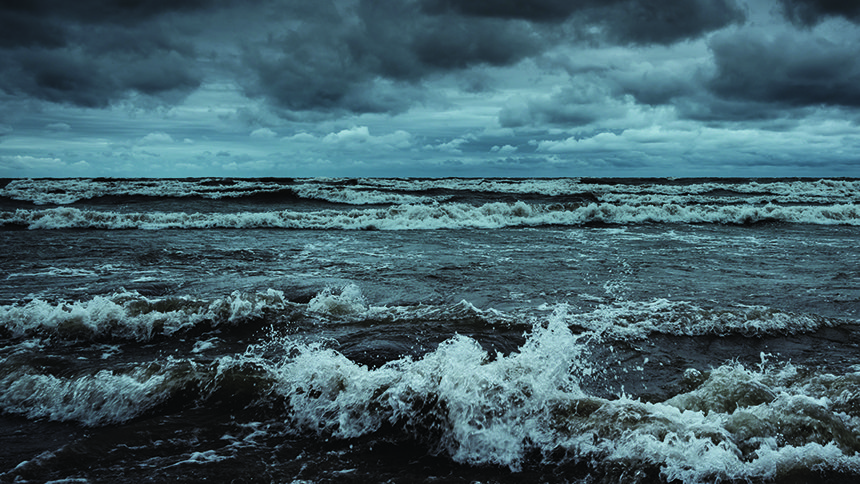 The National Weather Service issued a storm warning for damaging winds and hail approaching on a line from Menominee, Michigan, to Door County, Wisconsin, around 2 p.m. on Aug. 9, 2015.

Despite the signs of ominous weather, one of our guests, Andrew, decided to take his 6-year-old daughter about 300 feet off our breakwater to practice casting.

I was tinkering on my boat at the dock when their 21-foot Skeeter headed past. I asked Andrew if he had a VHF radio. He said he did. I assumed that meant he had it turned on.

When I turned on my radio and heard the weather warning, I hailed him but received no reply. I finally asked his wife to call his cell to warn him of the upcoming storm.

From our upstairs window, which looks northwest toward Sawyer Harbor, we watched a spooky white wall and a strip of black water approaching. Andrew must have seen it too and arrived back in the lagoon just as a straight-line wind in excess of 60 mph hit our beach. The wind took down a giant willow tree but did no damage to anything around it.

Because of the wind’s direction and ferocity, Andrew had to tie to the wall on the other side of the lagoon. He managed with the help of our neighbors, but he didn’t have a dock line ready—another mistake. He and his daughter were shaken up but not hurt.

The powerful storm blew two heavy wooden Adirondack chairs off our beach, one into the lagoon and the other in the bay shipping channel. With my binoculars, I located the offshore one, drifting with the confused seas of the storm remnants. I worried that it would be a hazard to navigation or bang into someone’s boat.

Picturing lawsuits or a visit from the U.S. Coast Guard, I headed out in Wind Rover with Andrew’s father-in-law, Dennis. We set off toward the chair, which was now floating near the buoys north of Waterfront Mary’s off Potowatomi State Park. Dennis pulled the chair aboard Wind Rover, and we returned to the dock with our booty.

Remember to listen to your VHF and heed all weather warnings. We need to practice on the water what we learn in the classroom.

Steven G. Rank serves as squadron educational officer for Door County Sail & Power Squadron/10. He enjoys teaching Navigation and writing for the squadron’s monthly newsletter, The Scuttlebutt. In the summer, Steve and his wife, Jeri, love sailing their Compac 19 sailboat, Wind Rover, on Green Bay and Lake Michigan in the waters around Door County, Wisconsin.