In recent years, large vessels such as cruise ships, ferries and tugboats have increasingly adopted hybrid electric drives. Now that solar panels have become more efficient and dramatically cheaper, I decided to try converting a medium-sized hull to a solar-electric hybrid.

Because this was a prototype, I wanted a hull that was big enough to provide the solar panel surface area I needed, had the weight carrying capacity for lots of batteries as well as useful space for travel but was cheap enough in case I messed up the whole project. After watching various broker sites, I found a boat in Kenosha, Wisconsin, that had been stored outside, was saturated in mold, had leaking heads and holding tanks, and smelled bad enough to deter most buyers. This allowed me to negotiate a price I could afford.

After purchasing the boat in April 2016, I moved it into the Southport Marina building in Kenosha. The 1986 Carver 4207 had twin Crusader 350s with only 540 hours of running time, which meant it had spent most of its life in the slip. The hull was sound, the shafts and props were good, but the dramatic change in propulsion meant it would need new props.

A bad odor permeated the interior, a 1980s time capsule, but overall the boat was solid and a major re-fit would also fix the smell. 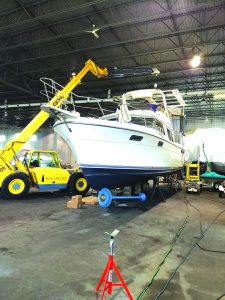 Hoisting the aluminum frame for the main solar panels in place

Next came the solar panel structure, which I designed and had fabricated by a Kenosha welding shop. Although it won’t win any beauty contests, I wanted something functional, strong and cost-effective. I used high-efficiency 250-watt black monocrystalline solar panels: 12 of them connected in three banks of four gives me a realistic maximum power of around 2.5 kilowatts. The panels feed into a MPPT 96-volt solar charge controller from Australia. Unbelievably, I could not find a suitable controller made in the U.S.

With this amount of solar energy, I can charge the battery bank in about two to three days of bright sunshine. In continuous bright sunshine, the panels alone could power the boat at 2.5 knots. 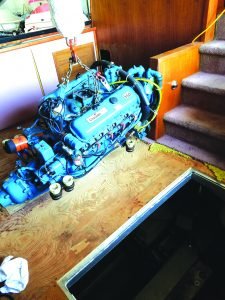 Removing the first of the old engines

I wanted a battery bank big enough to run for five to eight hours at cruising speed, which for this boat is about 5.5 knots. I considered lithium batteries, but the cost and complexity of the charge control system was a disincentive.

I had removed about 2,200 pounds of engines and transmission and added 800 pounds of solar panels and structure high up, so the boat’s center of mass and buoyancy concerned me. I looked for high-power lead acid batteries and found an interesting AGM design produced originally for cellphone tower backup systems. Rated at 200 amp-hours, these beautiful batteries weigh 135 pounds each, solving my weight distribution issue. I decided to use 26: 24 for propulsion and two for the house, generator starter and windlass. The 26 batteries store about 55 kilowatt-hours for propulsion and house needs. To preserve their life, I aim to use them at no more than 60 percent. The battery bank for propulsion consists of three banks of eight batteries in series, nominally running at 96 volts. I had custom battery boxes fabricated to fit into the center bilge and on top of the engine room stringers.

This hybrid propulsion system has three ways of providing power to the batteries and then to the digitally controlled induction motors and other electrical needs. I have five 2.5-kilowatt 96-volt ElCon chargers that can run at 120 or 240 volts at either 50 or 60 hertz, which is useful for international travel. I wanted to use 240 volts for the chargers, as they are more efficient at a higher voltage. The chargers can connect to shore power or to generator power using a new 16-kilowatt Northern Lights unit.

The main battery banks power the boat’s electrical systems at 96 volts via four 5-kilowatt 120-volt inverters. I use a conventional charger to charge the 12-volt house battery. The inverters directly power the 120-volt outlets, galley and heat pumps. The battery banks provide propulsion and all forms of vessel power, making this a simple concept to manage. 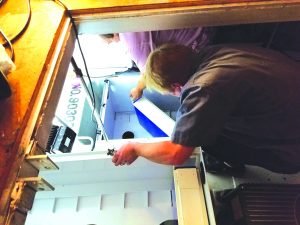 Lowering the first of 26 batteries into their battery boxes

The battery banks can be isolated into separate port and starboard configurations in case something bad happens. Also just in case, any inverter, charger or solar input can connect to either battery bank separately or all together in a single combined bank. I designed and built both AC and DC patch panels, which are capable of distributing power between all the charging and power consumption systems.

For propulsion, I used marinized Elco three-phase digitally controlled AC motors (the same concept as many electric cars). Induction motors have only a single moving part with no brushes and are tough enough for use in industrial drives. The Curtis controllers invert the 96-volt DC battery supply into variable speed three-phase AC. The motors run from zero to full speed in any increment, forward or astern, so turning the props at 1 rpm is entirely possible. With the digital control taking care of things, I can go from full forward to full astern instantly, which is nice for docking. This type of electric motor provides full torque at any speed. 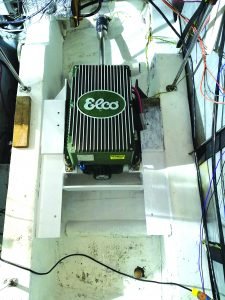 Elco makes some elegant, if somewhat expensive, digitally controlled marine motors. I didn’t go with the largest motors because I wanted to optimize runtime and performance. I wanted just enough power to give me somewhere around 6 knots at 6 kilowatts per side/motor. This should give me about 3 to 5 hours running time on batteries alone or indefinite running time with the generator and solar systems charging the batteries. The motors each produce up to 15 kilowatts at peak power, but I don’t intend to run them at that level except in an emergency. The new direct drive motors have no need for a transmission. I like the simplicity of this concept.

I cleaned and converted the gasoline tanks to diesel. The 400 gallons of diesel combined with solar power should give me a range of about 2,500 nautical miles, five to 10 times greater than the original gasoline design, depending on cruising speed.

Getting the boat on the water 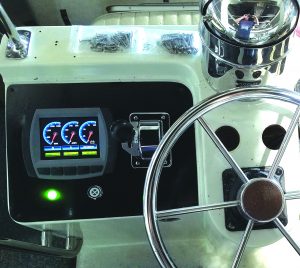 After many hours of intense work, we had the boat ready for launch and sea trials in September, first in the harbor and then in Lake Michigan. Installing digital engine controls and displays in both lower and upper helm stations

The trials highlighted no major issues, which made me smile, considering the project’s scale and 10-week timeframe. I took the boat out several times, up to Racine, Wisconsin, and back one day with just a few minor issues to fix.

The motors ran at only about 350 rpm because the original props were far too coarse for these new motors. Expecting that, I ordered custom 10-inch pitch props. Along with fitting the props, I have a lot of work to do over the winter, including fitting out the interior, fixing leaky hatches, repairing damaged canvas, installing electronics and more.

A certified engineer, Phil Shelley of Waukegan Sail & Power Squadron/20 holds a Ph.D. in biomedical engineering. He was born in the United Kingdom and has worked in the UK, Germany and the U.S. He is an industry expert and speaker on big data, analytics and cloud computing.