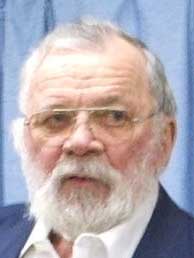 The tide recedes but leaves behind bright seashells on the sand
The sun goes down, but the gentle warmth still lingers on the land,
The music stops, and yet it echoes on in sweet refrains …
For every joy that passes, something beautiful remains.
—Anon

He joined the Army in 1953 and served in Korea and Vietnam, retiring in 1973. He then worked for Georgia-Pacific in Coos Bay. Ed was active in Veterans of Foreign Wars and was an avid hunter and fisherman.

Fourteen years ago, Ed and his devoted wife, Vivian, took the Power Squadron Safe Boating Course. They joined Coos Bay Squadron and became active members. Ed wore many hats for CBPS, including vessel examiner, Cooperative Charting, Squadron Educational Officer and Commander. Ed earned 11 merit marks, and had he not been overwhelmed by health problems, would have earned more.

Ed earned the educational grade of Advanced Pilot and was working on Junior Navigation, having passed the written exam, when eye problems prevented him from obtaining the required sextant star sights. He also took advantage of the elective courses, passing CP, EM, ME, Wx, IQ, SA and OT. He was awarded Educational Proficiency in 1999.