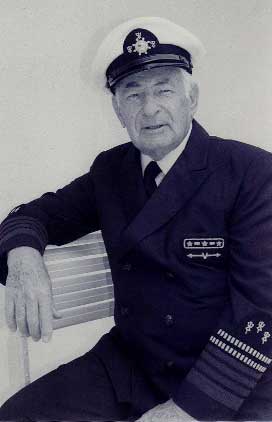 The United States Power Squadrons has lost one of its most senior members. At age 99 with 70 years of membership, P/D/C Robert H. Caddoo Jr., SN, had recently earned his 60th merit mark. He often told his family: “I was 2 years, 3 months and 2 days old when the USPS was founded at the New York Yacht Club in 1914.”

Bob was born in Yonkers, N.Y. When he was 9, his mother died and he went to live with his grandmother. In high school he worked afternoons as an office boy for the pioneering New York City advertising research firm Daniel Starch and Associates. Bob made such a deep impression that Starch advanced him tuition to attend the New York University School of Commerce.

After years in advertising research, Bob joined the advertising firm of Young & Rubicam Brands, where he was director of marketing and research from 1952 until 1973. Among his notable creations was the slogan for Lipton Foods: “Tastes like mother just made it!”

While playing trumpet in a church orchestra, Bob met his wife, Lucille, an accomplished violinist. They were married in 1937 and had three children: Caryl, Bob and Pat. Lucille died in 2006.

His association with the United States Power Squadrons began in 1941 when he began taking courses in the Great South Bay Power Squadron on Long Island. Like many squadron members, he received a commission as a U.S. Navy ensign and spent his World War II tour of duty aboard ships patrolling the North Atlantic. He then continued Power Squadron service.

Following retirement, he moved to Punta Gorda, Fla., and transferred to Peace River Power Squadron where he served in many squadron positions. In 1979 he achieved the academic status of Senior Navigator and was elected commander. He taught public boating courses and the Advanced Piloting course for 45 years.

During his last decade in Punta Gorda, he attended every squadron executive committee meeting and supported new initiatives even when “old timers” were critical. He spoke aggressively for progress and championed a change in the squadron name to include the word “Sail.”

He was elected as District 22 educational officer for the Florida Gulf Coast in 1983 and was installed as district commander in 1988. His contemporaries still tell stories about his great sense of adventure and wit. They traveled with Bob to visit all 20 squadrons from Flint River, Ga., over to Tallahassee and down to Marco Island, Fla.

Always contributing at the national level, Bob was a member of the national committee reviewing the Advanced Piloting examinations. In time he became one of the few to earn the title of “Member Emeritus” as a permanent member of the Governing Board.

Even after moving from Punta Gorda to Melbourne, Fla., in 2005, he called squadron leaders several times each year to find out what was going on and to offer sound advice. His love of the United States Power Squadrons was infectious and will remain with all who knew him.