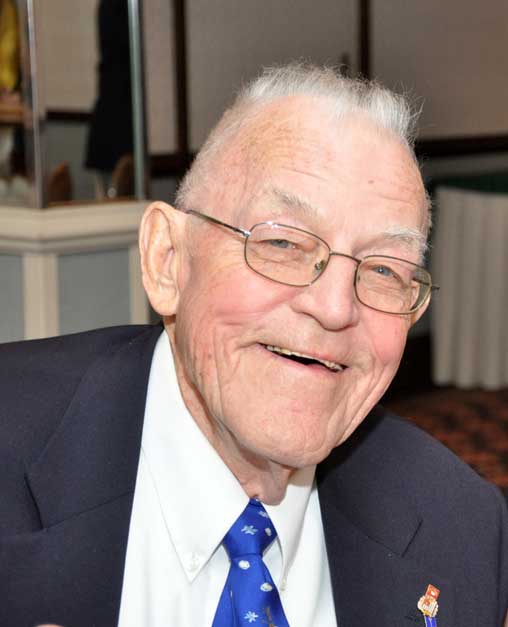 P/R/C Harry J. Kemp, SN, came into this world on 11 April 1925. Harry was one of four children. Margaret, his oldest sister, and his brother’s wife, Eileen, and his niece, Kim, his son and daughter-in-law, Michael and Sarah and his three grandchilden, Brendan, Ryan and Ally, and his wife, Kay, Kay’s daughter, April, and her two daughters, Rachel and Bonnie, survive him.

After completing his education, Harry joined the U.S. Navy at the age of 17 and proudly served as a member of the “Black Gang” in the engine room on a cruiser in the South Pacific during World War II.

Harry married his first wife, Billie, around 1946. They traveled the world together. The arrival of a son, Michael, completed their family until Michael married Sarah, and together they gave them three beautiful grandchildren.

Harry had licenses in air conditioning, heating, etc., and retired from Benjamin Cardozo High School as a custodial engineer. He was his union’s advocate for the blood bank while at Cardozo.

Harry was a devoted friend. Once you became his friend, you were his friend for life. P/R/C James Minogue, SN, member emeritus, was Harry’s squadron brother and enjoyed a lifetime of friendship with him.

He loved his New York Mets, and while watching the games, Harry enjoyed his favorite beer, Budweiser.

While residing in Mineola, N.Y., Harry joined Bayside Power Squadron on 9 Jan. 1960. He received his Senior Member Award in 1965 as well as his Educational Proficiency Award. In 1967, Harry received his coveted Educational Achievement Award, otherwise known in those days as a full certificate, or N.

Harry’s true love was LURE, a 42-foot Mathews that was berthed in Sag Harbor. He enjoyed cruising the waters of Long Island Sound, Connecticut, Rhode Island and the areas around Cape Cod with his family and his fellow squadron members.

Harry came onto the Bayside Power Squadron bridge in 1976 as the administrative officer and served as commander from 1978–1979. He was the epitome of a squadron member, active in all aspects of education, civic service and fraternity.

From 1987–1989 Harry served as District 3 educational officer. Let me share a memory from this time. Harry, for want of a better word, was shy with women, and it came as a complete surprise when my husband, Guy, received a call from Harry. Harry did not want to speak with Guy; he wanted to speak with me. Guy sat there, holding the phone, staring at it and saying, “It’s Harry and he wants to speak to you!”

I responded, “Harry who?” Harry was calling to ask me to accept the chairmanship of the District 3 Sail committee.

He became the District 3 commander in 1993—and Harry’s Helmsmen came into being. Known as “Dad” to many of his commanders, he enjoyed a year of unconditional support and devotion from his Helmsmen. I was fortunate to be Harry’s “chief wife.” After all, he said, someone has to make the final decisions. His other wives included Diana Minogue of Bayside Power Squadron, Ruth Appel, and Judy DeMeglio of Brooklyn Power Squadron.

Harry was asked to serve on the national Budget Committee, from which he retired as a rear commander.

He was recognized as a member emeritus for 50 years of service to USPS at the 2010 USPS Annual Meeting in Orlando, Fla.