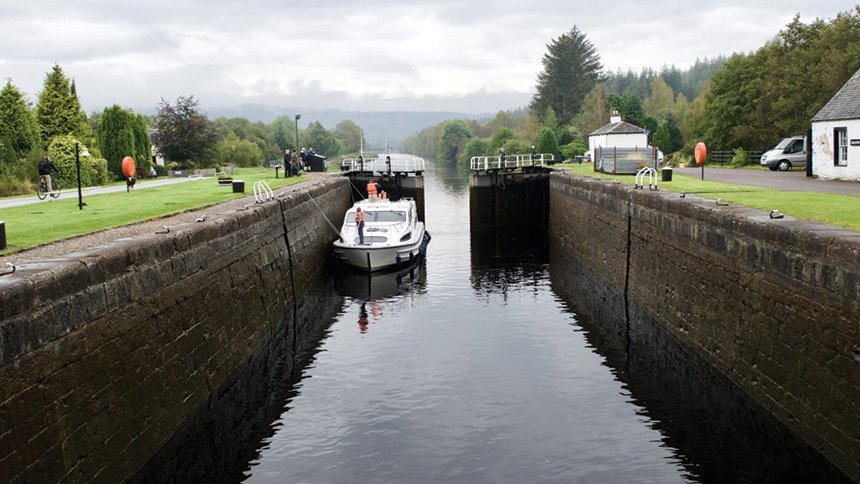 By Jeff Lagrew with photos by Jack Fish

The Bluegrass Chapter of America’s Boating Club takes annual charter trips all around the world. In September a group of nine adventuresome members, led by Commander Louise Lagrew, set off for the Caledonian Canal in Scotland.

A beautiful 90-mile waterway, the Caledonian Canal is made up of 26 locks and canals that connect four lochs traversing northern Scotland from Fort William on the Irish Sea to Inverness on the North Sea. The most famous of these lochs, Loch Ness, is home of the reigning “Marco Polo” world champion, Nessie the Loch Ness Monster.

We chartered a 42-foot boat from LeBoat out of its base at Laggan Locks. The vessel came completely furnished except for provisions, and the galley included two refrigerators and an oven. Four cabins and three heads and a large open upper deck provided adequate space for our crew.

After an early checkout and lunch, we headed south on Loch Lochy toward Banavie. Although only about a mile wide, the lochs are very deep. Loch Ness is more than 5,000 feet deep. The wind funnels between two mountain ranges that parallel the course, creating a tunnel effect. As a result, you always have a head wind or tail wind, and when the wind comes up, it gets choppy fast. We experienced a little of this our first day as we were flagged down by local boaters having trouble with their sails and motor. Our crew of highly trained America’s Boating Club members jumped into action, brought our boat alongside and set up a tow. Thanks to our on-the-water training, we delivered the boat and crew safely to their home port.

The next day, we toured Fort William with breathtaking views of Ben Nevis, the tallest mountain in the UK, the Great Glen and the surrounding Scottish Highlands. The area is also home to the Ben Nevis Distillery, where we had a guided tour of the production areas. We provisioned the boat in Fort William, as many places along the Caledonian Canal are remote. Heading north on our third day, we traversed Loch Lochy and Loch Oich, where we passed Invergarry and the ruins of Invergarry Castle on our way to Fort Augustus. 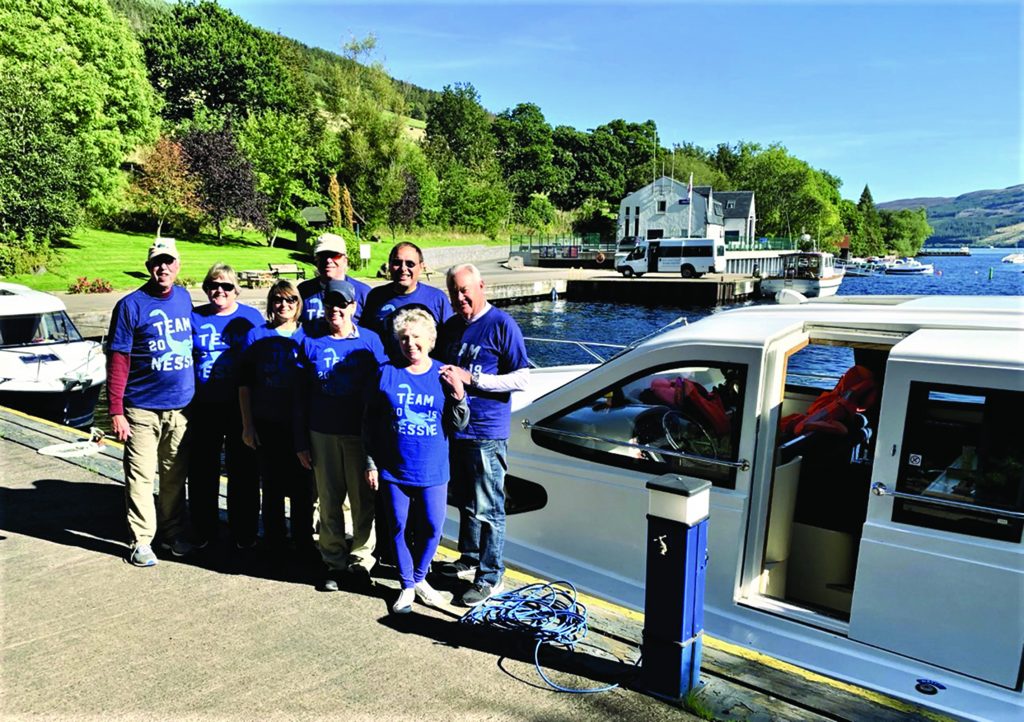 Fort Augustus is one of the most picturesque towns along the canal with plenty to do. The flight of five locks, at its southern approach, takes about one hour to negotiate, so arrive well in advance. Near the bottom of the flight of locks, pop into Iceberg Glass for some great souvenirs. The Caledonian Canal Heritage Centre is a great stop if you want to learn more about the history of this 200-year-old canal, while the Clansman Centre is one of the most unique attractions in Fort Augustus. Here you’ll experience live demonstrations by actors in traditional highland dress and gain an insight into what life was like in 18th-century Scotland. The town is a haven for walkers and cyclists with many trails around the area, the most popular being the Great Glen Way.

At the bottom of the flight of five locks is Loch Ness. We entered this 26-mile-long loch and began our search for Nessie, which included many potential sightings. A visit to the village Drumnadrochit on the west shore wouldn’t be complete without a visit to the Loch Ness Centre & Exhibition, where we learned about the many myths and monster-hunting facts that surround this ancient mystery. Just up the road from Drumnadrochit, back toward the loch is Urquhart Castle. Majestically positioned with sweeping views over Loch Ness, the castle dates to the 14th century. For a different perspective, you can also head to the Glens for some of the best pony trekking in Scotland.

The next morning, we crossed Loch Ness to Foyers to see Falls of Foyers, a spectacular 165-foot waterfall where the River Foyers drops into a gorge, feeding Loch Ness. After lunch it was back to Fort Augustus and back up the locks. The next morning, we headed down Loch Oich and returned to Laggan Locks.

After cleaning the boat and packing our gear, we enjoyed a final dinner at the Invergarry Hotel. The Scottish people were fun and friendly, the countryside was beautiful, and Nessie is out there. We would all recommend this trip to anyone.

Jeff Lagrew, a member of America’s Boating Club Bluegrass Chapter in District 24 for 23 years, has served as squadron and district commander. He holds a USCG 100 Ton Masters license, is an American Sailing Association Instructor Evaluator and was 2008 ASA Instructor of the Year. He currently serves at the national level as rear commander for Instructor Development.