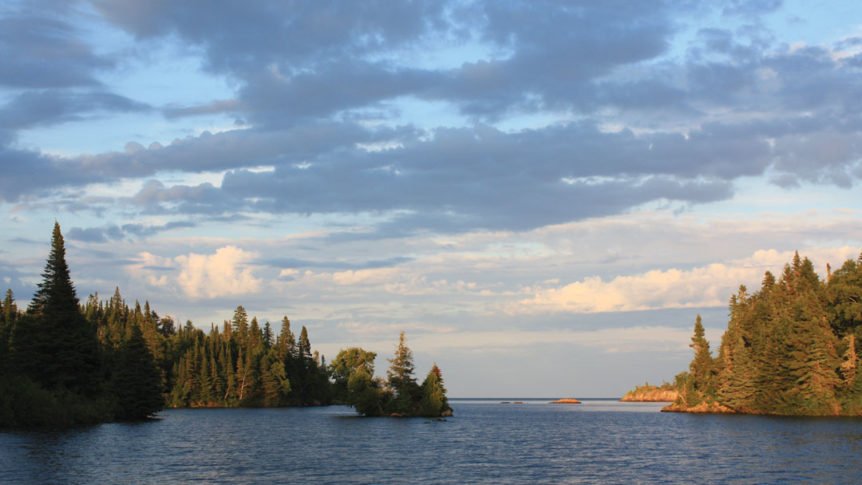 The crossing from Grand Portage, Minnesota, to Windigo at Isle Royale National Park takes you over 24 miles of open water. Because you can’t see land, you have to navigate using charts and set courses on the GPS. It’s fairly difficult to stay in a straight line with lots of waves and wind pushing you in different directions. 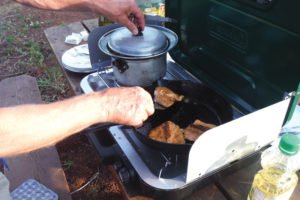 On our first day, we made the 24-mile crossing and spent the night in Windigo. We went on a 4-mile hike and got a catered fish dinner from some anglers. You can only take home three fish, but you can eat all you want while on the island, so anglers are usually happy to share because it means they can extend their fishing trip. 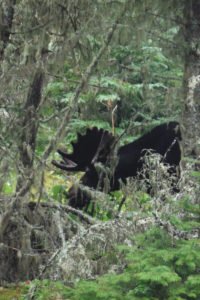 Bull moose near the trail at Tobin Harbor

On our second day, we traveled 40.2 miles to Siskiwit Bay. When we arrived at Siskiwit dock, a flock of seagulls and two otters greeted us. On our way in, we noticed a little river, so we took our Zodiac and managed to get a half mile up. The glass-calm water yielded amazing reflections. For dinner, we scored a fish dinner from yet another friendly angler.

On the third day, we headed to Chippewa Harbor, where we would stay for the night. During our 23.5-mile long trip, we took a 1-mile hike up to Siskiwit Lake, the largest on Isle Royale. When we arrived at Chippewa Harbor, we found the campsite completely full and a commercial dive boat and small fishing boat at the dock. Two canoers had forgotten their fishing poles at Rock Harbor, about 12 miles away, so our friends took them to retrieve their gear.

On our fourth day, we traveled 23.7 miles from Chippewa Harbor to Duncan Bay, stopping at Raspberry Island for a 2-mile hike and lunch. While at Duncan, we took the Zodiac up another river. We went about a mile and saw three different duck families, a turtle, and a beaver dam and house. That night we slept in one of the shelters.

The next day, we raced to get to Tobin Harbor before the storm. We stopped at Passage Island to hike to the lighthouse. Tobin Harbor is only a quarter-mile walk to Rock Harbor, which has a lodge, two restaurants and a few other buildings, where we waited out the storm. 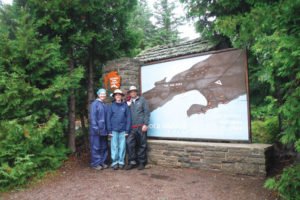 Returning from a rainy hike at Rock Harbor

The sixth day brought heavy rain with 4- to 6-foot waves and occasional 8- to 10-footers, so we were glad we’d decided to stay. At Rock Harbor, we took a 4-mile hike out to Scoville Point to see the storm. On the way back, I saw a moose and her calf. Later that day, we also saw a bull moose.

It stopped raining on our seventh and final day. We spent the morning trying to dry out our things. The dock was covered with shoes, clothing, towels and canvas. Afterward, we embarked on a 52-mile journey back to Windigo. Along the way, we stopped at the Edisen Fishery and walked to the Rock Harbor Lighthouse. We hiked to the “mooseum” where the researchers of the Wolves and Moose of Isle Royale project live (isleroyalewolf.org). They have been leading the study for several decades and have a huge collection of moose bones. 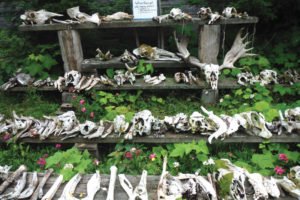 The “mooseum,” home to researchers of the Wolves and Moose of Isle Royale project

We arrived at Windigo in the late afternoon, ate our last dinner on Isle Royale and made the 24-mile crossing back the following morning.

Isle Royale is a truly beautiful and amazing place filled with wonder and untouched wilderness. The surrounding waters can be calm one day and dangerous the next. When you’re there, you’re reminded that nature is truly in charge; people have tried to tame the island and failed.

Emmarie Raby is a member of Minnetonka Power Squadron/10 along with her parents, John and Holly Raby. Emmarie enjoys exploring the Great Lakes aboard Holly Marie, the family’s 23-foot Boston Whaler Walkaround. This article first appeared in the squadron newsletter, TonkaNAUTS.