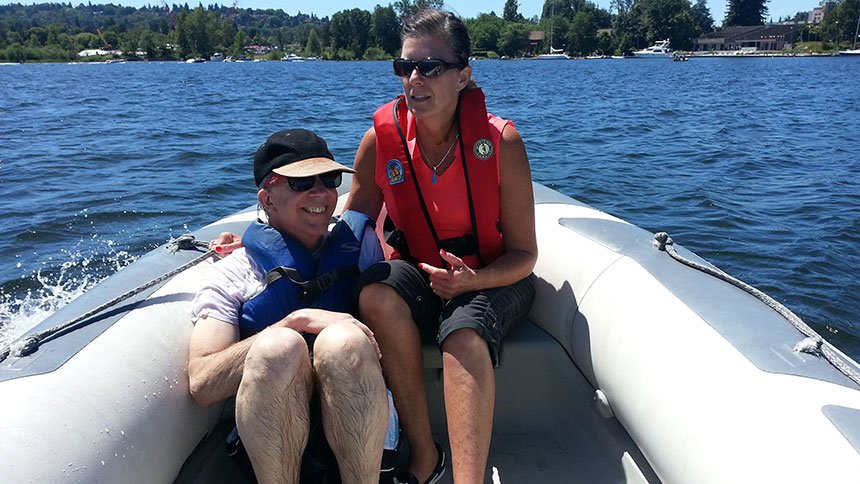 Why do you take classes? For me, curiosity drove me to take Celestial Navigation. I had to know how seafarers crossed the oceans without GPS. Taking Engine Maintenance taught me to maintain a boat engine and fix problems when they occur. Recently, I discovered that taking Emergencies On Board can literally save a life!

Last June the Seattle Yacht Club invited Rick Edel and me to help teach Practical On the Water Training. We spent most of the morning in the classroom. After lunch we paired up with students and headed out through the Mount Lake Cut to put what our students had learned in the classroom to practical use.

During that class, my student, Dawn Mello, and I headed out to Union Bay to continue her on-the-water training. What we encountered just northeast of the Cut put everything into perspective.

Boaters had come out in force to enjoy the beautiful day, but a stiff wind made conditions lumpy. Dawn and I saw a paddleboarder 300 yards east of the University of Washington Waterfront Activities Center waving a brightly colored towel.

When we approached, we found the paddleboarder had an exhausted woman, not wearing a life jacket, on the paddleboard with her. The woman was frantically crying for us to save her husband. The couple’s canoe, rented from the activities center, had capsized. As we approached the swamped canoe, we found the 50-ish husband wearing a life jacket and floating face up, barely able to hold onto the canoe.

I approached the victim into the wind and gave control of the boat to Dawn while I grabbed his arms and lifted him onto the gunnel of the inflatable. Hypothermia had set in, and he could barely move.

Dawn gave him a bear hug to protect him from the wind while we returned him to the activities center.

When we arrived, the man couldn’t walk. Cramping and loss of muscle control, side effects of hypothermia, had set in. He was transported to the emergency room.

Bob Anderson and Bob Seymour, who were supervising the training exercises from the chase boat, stayed with the paddleboarder and the victim’s wife until the rescue boat arrived to pick her up. Then they towed the canoe back to the dock. The couple had been in the water only about 20 minutes, but the air temperature was 70 degrees, and the water was about 53 degrees.

Dawn, who works at the VA hospital and has an extensive medical background, said she was aware of hypothermia but had never experienced how dangerous it can be.

For me, the rescue was automatic. Although I keep my rescue and first-aid skills up to date and have practiced rescues many times during on-the-water classes, this was my first real-life rescue.

Do you know why we approached the paddler into the wind? Come take a class and find out.

Dan Leenhouts is the Educational Officer at America’s Boating Club Poverty Bay in Washington State. He also enjoys performing vessel safety checks and telling folks about the club and boating safety. Dan and his wife, Shelly, have been members since 2006. They fish, crab and explore Puget Sound aboard their 26-foot Tollycraft Sedan, Clam Chop.