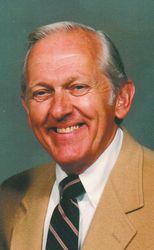 It sunk in that my grandfather, Ray Anderson, was seriously ill when I visited him for the Easter holiday this year. The stories were fewer and shorter; he was often tired and resigned. His battle with cancer had intensified over most of the past year, and I was grateful for the time spent with him.

When I moved to Washington, D.C., this summer for an internship, my grandfather and his health were on my mind. My internship required that I often browse Congress members’ websites. During a web search one day, I discovered that the American flag is flown over the U.S. Capitol building in honor of special American citizens.  I immediately thought of my Grandpa Ray, who was a proud World War II veteran and served in the U.S. Army. He had been wounded while fighting in Alsace-Lorraine in 1945.  Especially in his ill health, I knew that this honor would mean the world to him.

Excited about this opportunity, I wrote a letter of request on my grandfather’s behalf and mailed it to Rep. Glenn Thompson’s office, the representative for where my grandparents lived in northwestern Pennsylvania. The next week I got a phone call from Nancy Billet, the office manager for Rep. Thompson. Ms. Billet believed my grandfather was worthy of this honor, and she suggested he be honored by flying his flag on the most distinguished day: the 4th of July.

I enthusiastically agreed to her suggestion, knowing it was a day that many people requested and one that would appropriately celebrate my grandfather’s life. After the flag was flown, it would then be sent to my grandparents to commemorate the honor.

Unfortunately, I would never be able to give my grandfather his flag. He passed away quietly 3 July, 2011 with his wife of more than 60 years at his side. But I was determined; if Grandpa would never see this flag, it would at least be present at his funeral 7 July to display thanks for his life of service to our nation.

I contacted Ms. Billet again, this time with a much more somber request. Ms. Billet promised that, although processing of the flags usually takes five days or more, she would see if she could get the flag to me sooner. After making numerous phone calls, Ms. Billet reported back to me that the office that handled the flags agreed to release Grandpa’s flag that very day. I rushed to the flag office, picked up Grandpa Ray’s beautiful flag and plaque describing his honor and quickly packed and departed for his funeral.

Words cannot explain my father’s and my grandmother’s reactions when I presented them with the flag and plaque at my grandfather’s viewing.  The plaque was displayed next to his casket and passed around to family and friends, and my grandfather was recognized as the incredible American and distinguished veteran that he was.

Surrounded by numerous family and friends from all across the country, my grandfather received a beautiful military funeral complete with an honor guard and two Army soldiers who were present to honor his life and memory. While preparing the funeral, my family was amazed to discover that my grandfather had received several military accolades of which he had never spoken to anyone, including a Purple Heart, two Bronze Stars, a European-African Middle Eastern Theater Ribbon, a Combat Infantryman Badge, an American Theater Ribbon, a Victory Ribbon and a Good Conduct Medal. Grandpa Ray was a great man and a hero of our nation — and a humble one at that.

I can’t thank Rep. Glenn Thompson’s office enough, especially Ms. Billet, for the care they took in honoring my grandfather. It may seem like a small honor, but to a grieving family, it meant everything. As my dad said during Grandpa’s eulogy, “Please, don’t forget my dad,” and, please, don’t forget any of the veterans who have served, been wounded and have died for our nation. Honor them as my Grandpa Ray has been honored, and, if it means half as much to any family of a veteran as it did to mine, it will be well worth it.

May my Grandpa Ray rest in peace. He will not be forgotten.

This article was written by Ray Anderson’s granddaughter, Jessica Reed, and submitted by Anderson’s fellow squadron member, David Hollingshead. Anderson was a member of the Kinzua Power Squadron and had 27 merit marks.