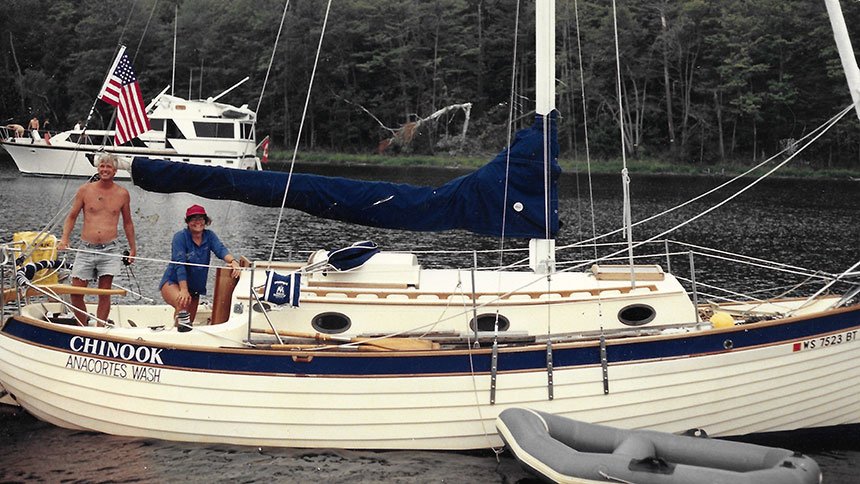 Editor’s note: This story is a part of a book (working title, “Sailing Across North America”) John is writing about his boating adventures in 1990 while sailing from Lake Michigan through the North Channel, Georgian Bay, the waterways of Canada, and eventually down the Atlantic Coast to North Carolina.

Despite the gray and rainy day, my wife, Carol, and I decided to make the run from Beaver Island, Lake Michigan, to Mackinac Island, Lake Huron. When we first purchased our chartbook for Lake Michigan, I had examined our expected route, which was straightforward and simple until you departed Beaver Island. There, the passage through Gray’s Reef was marked with numerous shoals, reefs and rocks.

Both Carol and I had taken the United States Power Squadrons Piloting course, but we left on our voyage before the final exam. “Maybe this can be our final exam,” I said.

We equivocated on our departure, but at 10 a.m. the weather looked like it was breaking. We pulled anchor and headed out of St. James Harbor, finally breaking away from the lure and attraction of Beaver Island.

Up to this point, passagemaking for us had been nothing more than harbor hopping up Michigan’s west coast, but now we would pass through a dangerous and treacherous area that would require precise navigation. Although nervous about transiting Gray’s Reef, we were thankful for our LORAN receiver; however, we both knew better than to put all our trust in the device.

When we left the harbor, we started a dead reckoning plot. One of the oldest forms of navigation, a DR plot uses speed, time and heading to plot a course on the chart. Now GPS has made this skill nearly obsolete, but good navigators always keep a DR in case of equipment failure.

Weather, electronics put us to the test

As Beaver Island disappeared astern and a line of rain squalls came in, we realized how important it was to keep track of our position. The rain caught up with us, so we tried sailing with our dodger, a canvas screen that partly protected us from spray. It wasn’t really designed for sailing, so Carol took a reef in the main (furling some of the lower sail area), which helped lift the boom.

We were still nervous about our dead reckoning plot. It’s one thing to make a mistake on a piloting exam. You are given a mark with a red pencil and told to try again. But to make a mistake while passing through Gray’s Reef could have catastrophic results.

Only two hours out from Beaver Island, we again hit a rain squall that cut our visibility way down. I asked Carol to check our position on the LORAN receiver. She went down below and after a few minutes, she came up with a worried look on her face. “All it’s doing is flashing: ‘HI CAPTAIN, HI CAPTAIN!’”

Panicked by the idea of navigating this reef solely with our newly learned skill of dead reckoning, we almost lost our nerve and turned back. We were about halfway to the reef; our navigation was good so far, and visibility could improve. We looked at each other, and I said, “Let’s go for it.” Carol nodded in agreement.

Almost as if it had been testing our nerve, the LORAN receiver began functioning properly again. We sailed directly toward the channel, cutting through Gray’s Reef. As we turned to head into the wind, we dropped the jib and motor sailed with the mainsail pulled in tight. This caused the diesel exhaust to draw up into the dodger.

I stood with my head above and behind the dodger to get fresh air. As a result, rain seeped down my neck and back. Visibility dropped as the rain increased, and we pounded into big waves. For the first time since leaving Wisconsin, my stomach didn’t feel settled. Carol, working below on another fix using LORAN, took a Dramamine. 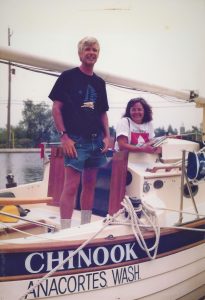 John and Carol on Chinook

LORAN gave her the latitude and longitude of our exact position. She found these numbers on the side and bottom of the chart and drew a vertical and horizontal line. Our position was where the lines intersected. Several minutes later she shouted up that we were 15 miles off course and almost on top of the reef! Confusion and panic set in. I couldn’t believe we were that far off course. It’s a terrible feeling to suddenly lose one’s bearings.

Just then, through the mist and rain, I spotted an abandoned lighthouse exactly where it was supposed to be on our dead reckoning course. “I have a visual fix!” I shouted. I didn’t know if there was such a term, but it sounded good, and I was very excited.

Shortly after that, Carol found her mistake. She had switched to the chart for Gray’s Reef and had missed the change in scale on the side of the chart. She soon had us charted correctly. We breathed a sigh of relief and continued on, spotting the markers guiding us successfully through the reef.

Can anyone say ‘extra credit’?

I was wet, cold, and tired, but at least we’d made it past Gray’s Reef. We turned eastward toward the Mackinac Bridge, once the longest suspension bridge in the world. We saw the sun for a few moments, and it looked like the worst was behind us.

Soon the wind speed increased (right on the nose), and the waves kicked up. We cut the engine and raised the jib. We now sailed close to the wind, tacking back and forth, first toward land then back to the edge of the freighter track. We spotted a large freighter and took bearings. We were definitely outside his track. I spotted another sailboat slogging northwest. The crew looked cold and miserable and probably said the same thing about us.

All vessels are required to monitor channel 16 on their VHF radios. On ours we heard, “Sécurité, sécurité, sécurité,” for navigational warnings. We listened to a warning that a large vessel had passed under the Mackinac Bridge, westbound. I thought I spotted the vessel; it looked gigantic, longer than any boat I could imagine. Carol checked through binoculars and said it was actually one freighter passing another. (We later learned that the slower one was over a thousand feet, one of the largest to ply the Great Lakes.)

Carol punched in the time to go on the LORAN receiver, and it said five hours. Our goal had been Mackinac Island, but Mackinaw City was five miles closer, so we changed our destination. Through the mist, I could see three small boats, one towing the other two. We would have offered assistance, except that our 11-horsepower engine and two-blade prop could barely push us through the wind and waves.
Water continued to dribble down my neck, all the way to my shoes, and my stomach still felt unsettled from the rough motion and exhaust fumes. I had been at the tiller since 10 a.m., but at least we were past the halfway point.

I didn’t think conditions could get worse until the fog closed in and visibility dropped to under a hundred feet. We were closing with the shipping lanes as we approached the bridge, and we both peered ahead into the fog. We had 2 miles to go, but we had not seen anything. 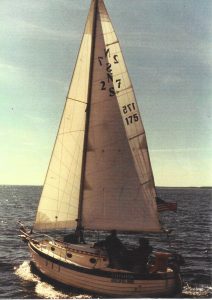 Carol dropped the jib, and I went back to motor sailing in the compass direction LORAN indicated. Our large black ball compass mounted on the cabin bulwark was the only thing that kept our world oriented. Joe, our friend from Leland, had given us a list of various coordinates to enter into our LORAN receiver. We used the coordinates for the south main pylon of the bridge. We also used the depth sounder to confirm our approximate position by comparing the readings with the depth marked on the chart. Now, less than 1 mile away, we had not yet seen the bridge. Carol went below to plot our position and kept checking LORAN to be sure that I was steering the proper course.

At less than a half mile to the bridge, we still had not seen anything. I decided to stop motor sailing (Carol dropped the main) and use only the engine to motor directly for the bridge. I felt fear, apprehension and exhaustion, which made the day’s earlier tension seem like recess.

With two-tenths of a mile to go, the LORAN waypoint alarm started beeping. Carol gave me the correct compass course to steer, and I held the course to within one degree. Carol yelled up, “We should be on top of it!” I peered into the fog and just to starboard loomed the huge cement base of the south main pylon of the Mackinac Bridge. I glanced up; 130 feet above our decks, the highway span literally popped out of the fog. Either end of the roadway high above our heads disappeared into the clouds, looking like a highway to heaven! It was absolutely breathtaking. Carol came on deck, looked up, and asked, “Will our mast clear?”

It did. After we passed under the bridge, the fog lifted, the rain stopped, the wind died, and the waves slackened. Our test was over. Carol double-checked the chart and punched in the coordinates for Mackinaw City Marina. Wet, cold, drained and exhausted, we headed toward the marina 1 mile away.

“Do you think we passed our exam?” Carol asked.

“Not till our boat is docked,” I responded.

Carol called the marina for a slip. “Second dock, #17,” they responded. Jud and Carol Ann of So Small had heard our request for a slip on the VHF radio and were waiting at the slip to grab our lines.

Once we had docked, Carol reiterated, “Well, do you think we passed?”

“It might not be high marks, but any time you take your boat out and return safely, that must be worth a passing grade!”

A sinfully long hot shower at the marina and a bowl of chili aboard our friends’ boat put things right again.

After college, John Gignilliat volunteered for the Peace Corps in the Philippine Islands. He has been a childcare worker, a schoolteacher in an Inuit Village, a Las Vegas croupier, a commercial bookkeeper, a casino ship counting clerk, a business accountant, a North Carolina Ferry operations manager, a bridge club director and a radio station employee. He enjoys sailing, writing, and playing duplicate bridge.