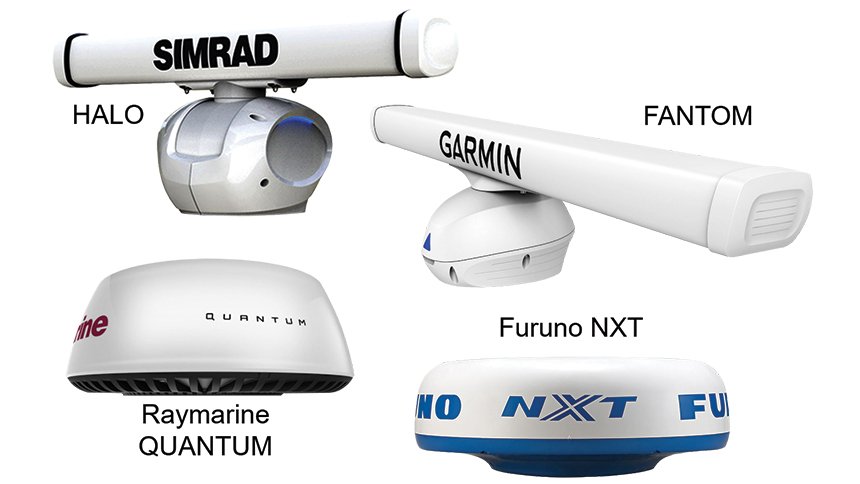 Marine electronics are constantly evolving, but no change in recent years compares with the move to solid-state radar. Gains in features and performance are so great that almost every boater should consider upgrading. All four major marine equipment manufacturers now offer solid-state pulse compression radar. Here’s why.

Traditional marine radar uses a magnetron vacuum tube to generate and transmit short high-power pulses. The radar receiver awaits faint echoes from boats, land, buoys or other objects. Did you realize that the average radiated power for a 2,000-watt radar is less than 1 watt?

At about 20 to 40 watts or so, solid-state radar can’t generate high power pulses, so it makes the pulses longer to retain somewhat comparable energy per pulse. That might present a problem since historically the echo displayed on the screen is as long as the transmitted pulse. Enter pulse compression. Using digital signal processing, the radar receiver matches the image of the transmitted chirp-like pulse, and out comes a short, strong echo on the screen. This takes some sophisticated signal processing. What formerly would fill a room of equipment is stuffed into a small circuit board within the radar scanner unit.

The same processing capability also lets them effectively narrow the antenna beam width to about half its native width for higher resolving power. For example, a 24-inch radome can process the equivalent of 2-degree beam.

What does that mean for me? For a start, the solid-state radar can see almost in front of its nose—down to about 15 feet. Imagine finding your empty slip using your radar in the dark or fog. There’s no warm-up time; turn it on, and it’s on. That’s just the beginning.

All that signal processing means the radar can measure Doppler shift on the returning echoes. These radars can tell you whether a target is approaching and paint it a different color, like red. One example I saw was one of these radars picking out an approaching boat under a fixed bridge. Normally, you cannot see a boat masked by a fixed object.

Forget MARPA (Mini-Automatic Radar Plotting Aid), the processing effectively looks at every return, highlighting only those whose rate of closure with your boat exceeds a threshold, say 3 knots. That gives you just a few things to worry about shown in red while all the rest is shown in green.

One manufacturer puts all this into a 14-pound radome with only a power and Ethernet cable to your boat. A typical radome scanner costs about $2,000. Open arrays are available up to 6 feet, but you’ll pay as much as $7,000. You’ll need a matching display to make most of these work, but it’s worth the consideration.

The overall performance of solid-state radars is comparable to their magnetron cousins, and there are no tubes to wear out. For details, visit Furuno, furunousa.com; Garmin, ­garmin.com; Raymarine, raymarine.com; or Navico (Simrad, Lowrance, B&G), navico.com. –Bob Sweet