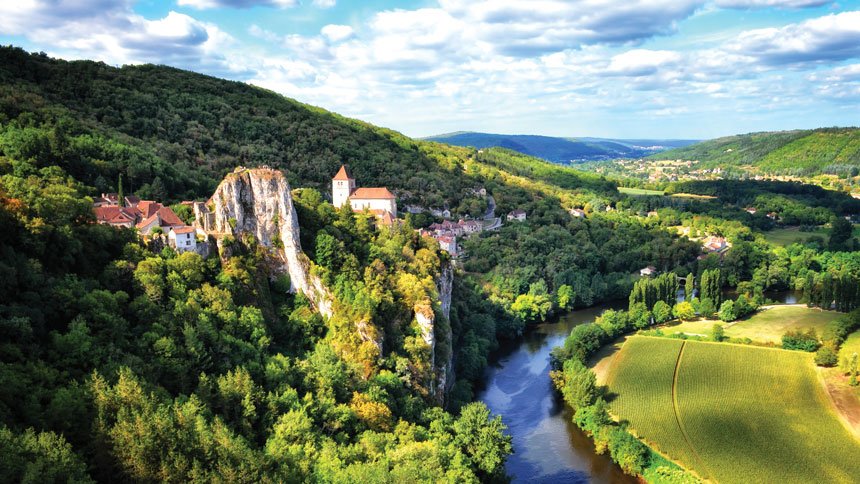 
By Dave Davies In recent years, my wife, Jo, and I have taken several powerboat charters in England, France and Germany—most on French rivers and canals. If your ideal vacation is a slow cruise down a tree-lined river with quaint villages, ancient castles and stunning views, you might consider chartering a river boat, too.

We have visited the rivers of Brittany in northern France, the Canal du Midi in southern France, the rivers and canals of the Saar going from Alsace Lorraine to Saarbrücken in Germany, and the Garonne River and canal from Bordeaux to Carcassonne. Other prime locations include the Loire Valley, the Douro River in Portugal and many others. By and large they have been wonderful, but bear in mind the cautions below.

Whom do you charter from?

We have used mostly LeBoat (leboat.com). Although based in France, the company covers Germany, Italy and other areas. Formally known as Crown Blue, the company is now part of the German company TUI, which also owns Sunsail and the Moorings, so if you have sail charter experience on either of those, your frequent customer discount might work. You’ll find several other charter companies by doing a quick internet search, including Nicols of France and others.

How much does it cost?

The cost of a river boat charter typically depends on the size and age of the boat, but we expect to pay approximately $1,000 per person per week—assuming six people on a boat. Add-ons include diesel at about $50 or more per person per week and collision insurance, which is essential, at about $30 per person per week. Provisioning costs extra and varies with your appetite. Based on our experience, I suggest setting up a kitty with a reliable person acting as purser; don’t include alcohol in the kitty. Let everyone BYOB.

What kind of boat? Can I get a discount?

As a party of six or so, we usually rent a 50-footer with a 12- to 15-foot beam, two levels, three cabins, and two or three heads. Usually the boats have generous living areas and kitchens with a stove and fridge. Be sure to ask for discounts off the list price, which can include frequent customer discounts, off-season discounts and early booking discounts. LeBoat generally caps discounts at 20 percent.

What makes it worthwhile?

Often in France, the river or canalized river will flow past historic sites, châteaux, villas and castles. You can moor by the bank and take in the sights. Many times, we have just moored (it’s usually free, believe it or not) and wandered into quaint villages with great little cafes and bars right by the water. We usually meet other very friendly boaters from many different countries; it’s party time on the water. Compared with sailing, it’s easier and safer. You’re never more than 3 feet from shore, in water more than 3 feet deep or more than 3 miles from a cute French restaurant.

What are the snags?

For starters, canal boats aren’t very maneuverable. They usually have a single prop with a low-horsepower diesel engine. They maneuver by a small tiller behind the prop—not a swing outdrive as found in conventional powerboats. It takes skill and experience to pilot through a narrow bridge, lock or channel. And the prop-wash can be significant. In fact, using the prop-wash is one way to work your way into a berth.

Few of these boats have holding tanks, which should be obvious since there are no pump-outs. This means the water is not exactly pristine. Once on the Saar, I fell in and hit my head on the transom, and it bled. Believe me, I showered and showered after that event. In addition, you will encounter literal snags, tree stumps, old bathtubs, fishing rods, everything except swimmers.

Another snag are the dreaded locks. The Canal du Midi has 60—six per day on our trip. On the Saar, we encountered 31 locks on a one-week trip. Many locks are do it yourself but are readily mastered after a few failed attempts. I prefer a DIY lock to a manned French lock since often the lock keeper is having a siesta, and you are stuck for two hours.

So with limited maneuverability, wide boats, narrow channels and many other boats, you can expect a few collisions; in fact, I have never been on a river trip without one. So take out the full collision insurance.
Remember, your equipment can fail at any time. We were coming out of the canal into the Vilaine River in the center of Brittany when the throttle linkage snapped. In heavy
traffic, we crossed the wide Vilaine out of control and slammed into the ancient quay wall. Two elderly French ladies out for a stroll saved us by catching a line and tying us down. So expect some excitement along with the fun.

Lt/C Dave Davies, AP, and his wife, Lt Jo Davies, P, of Boulder Valley Sail & Power Squadron/30 have been boating for 50 years both in their 28-foot Bayliner on the Sacramento River Delta and in sailboats on San Francisco Bay and Colorado’s lakes. They have also chartered boats in Thailand, Tonga, the Amalfi Coast of Italy, Croatia and elsewhere.