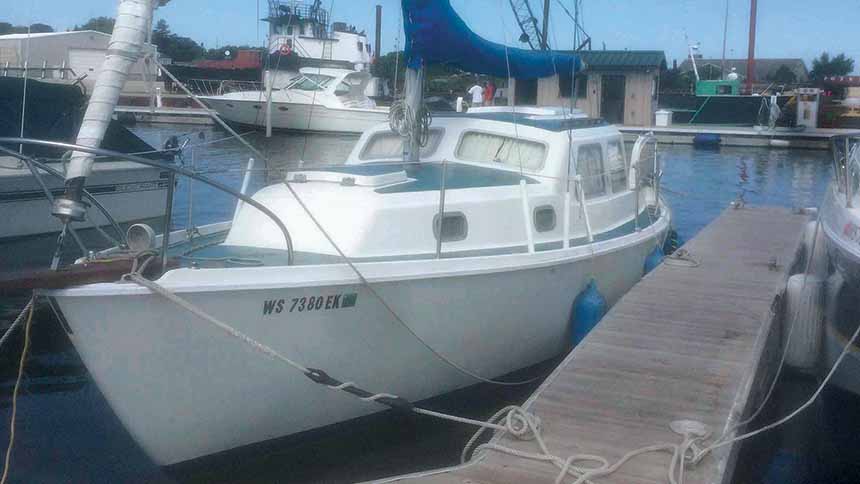 We set sail on Lanikai for our annual cruise around the Door Peninsula late last August. Lanikai, a 1969 Pearson 300 sloop, was originally purchased by my parents, who sailed it 25,000 miles before shipping it to me 20 years ago. The sturdy boat sleeps three to four crew easily.

Its four-cylinder diesel engine was installed in 1995. Lanikai (Hawaiian for “beautiful sea”) displaces 10,000 pounds with 3,800 pounds of ballast, is 30 feet long, has a 9-foot beam, and draws 3½ feet. Our crew consisted of my son Richard, my brother Michael from Iowa, and me. My first mate, Bonnie, declined to join us.

We had planned to leave Sturgeon Bay Yacht Harbor on Thursday, Aug. 23, and proceed to Baileys Harbor Town Marina. However, Friday’s weather forecast called for 35-mph winds and 10- to 12-foot seas on Lake Michigan, so instead we sailed directly to Shipyard Island Marina on Washington Island to avoid being trapped by the weather in Baileys Harbor. If weather permitted, we planned to do some day sailing in the waters of Death’s Door on Friday. As it turned out, the weatherman was right, and we spent the day touring Washington and Rock islands in a car provided by the marina.

We had an uneventful sail to Sister Bay on Saturday and stayed at Sister Bay Marina that night. The next day, we sailed from Sister Bay around the west side of Chambers Island to the Menominee Marina in Michigan. We encountered a couple of squalls between Chambers Island and Menominee with 30-knot gusts and 25-knot sustained winds but weathered them with a rolled-up storm jib and our mainsail. The storms only lasted about 20 minutes each before the winds and waves petered out.

On Monday, we woke to heavy rain. The weather forecast called for 10 to 15 mph winds in the morning, increasing to 15 to 25 mph winds in the later afternoon with a chance of thunderstorms. We thought if we left early, we could cross the bay before the heavier winds hit, so we departed Menominee Marina about 8 a.m. and motored in the rain in our foul-weather gear and self-inflating life jackets to the western tip of Green Island.

Here, we put out our sails and headed for the mid-channel buoy at the mouth of the Sturgeon Bay ship channel on a starboard tack with a course of 160 degrees magnetic. Winds were already at 15 to 20 knots out of the south, and waves were 1 to 2 feet. The winds increased to 20 to 25 knots as we crossed the bay, so we reefed our jib down to storm size. We were unable to keep our original course due to the wind and wave action, and at about 2 miles off Door County, we were 5 miles north of the mid-channel buoy. We came about and began a port tack of 240 degrees magnetic, which would hopefully get us farther south so we could head into the Sturgeon Bay ship channel.

A large thunderstorm came upon us from the south, accompanied by heavy rain, hail, thunder and lightning; winds increased to 40 knots with waves in the 4- to 6-foot range. By this time, it had become too dangerous to go on the deck to try to lower the mainsail, and we had no safety lines rigged. We only had a small storm jib out in addition to the main.

Around 11:45 a.m., we were about 2½ miles northeast of the Peshtigo Lighthouse, as we attempted to come about in the storm and head to the Sturgeon Bay ship channel. The waves, increasing to 8 to 10 feet, came in quick succession. Winds gusted at 48 knots. As we came about, the 25-year-old mainsail shredded, and we temporarily lost control. A wave came over the bow and popped open our forward hatch, inundating our forward cabin. My brother went inside and secured the hatch.

As we tried to roll up the remaining storm jib, the sheets got away from us, tangling into a huge knot and making it impossible to roll it up any further. We tried to start the engine but couldn’t hear if it was running over the shrieking winds and flapping sails. Eventually, we determined it was running and headed at a course of 160 degrees magnetic to get into the lee of Door County. We could only manage about 1½ knots due to the wave size.

We began to feel the lee of Door County at about 12:45 p.m. and increased our speed to 4 knots. As we approached the Sherwood Point Lighthouse, we secured the remnants of our sails and proceeded to Sturgeon Bay. The sun came out as we passed the mid-channel buoy, though the winds continued at 20 to 25 knots. Reaching our pier around 3 p.m., we broke out some summer sausage and beer to celebrate our return.

Sailing season was over for Lanikai. I had a new mainsail built by Dorsal Sail and Canvas, along with the sun cover on the jib. I replaced half the battens, which had blown away, and the shredded jib sheets.

This year, we held our annual cruise in July instead of late August, when the winds seem less predictable. We’ve learned to not rely as heavily on the weather forecasts and to get our sails down quicker in an approaching gale.

Dan Balch is a retired financial planner who lives in Casco, Wisconsin, with his wife, Bonnie, and two Irish setters, Jameson and Scarlett. Dan and Bonnie are members of Door County Sail & Power Squadron/10. This article first appeared in the squadron newsletter, The Door Scuttlebutt.