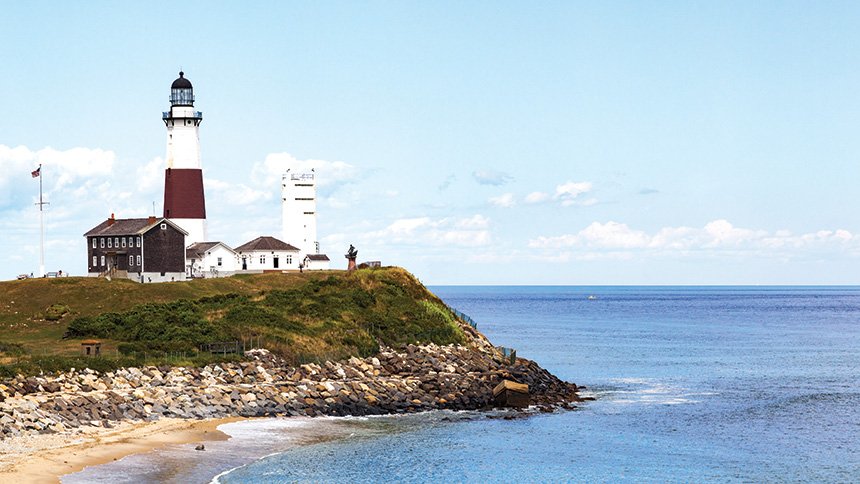 We were just past the halfway point in the 2016 Around Long Island Regatta when Steve Kornspun woke me up in the wee hours of the morning and said, “Jeff, c’mon, we need you on deck.”

I joined a tense conference in the cockpit. The night was eerily quiet and very dark. Something strange was happening. There was almost no wind. In fact, the wind was so light you couldn’t tell what direction it was coming from.

According to the compass, we were headed southwest, just as we should be, but with a strong current in so light a wind, we were actually going slowly but steadily backward!

Since 1977, the Sea Cliff Yacht Club has run this annual event. The Around Long Island Regatta starts off Rockaway Point, near Sandy Hook. The course runs 205 nautical miles along Long Island’s south shore, around Montauk Point, up through Plum Gut, and southwest through the sound to the Glen Cove Breakwater in Hempstead Harbor. This year, over 75 boats started the race at 3 p.m. on Thursday, July 28. I was one of a crew of eight aboard Duet, a 37-foot Jeanneau sloop, owned and skippered by Andy Lubimov. Our pilot was City Island Sail & Power Squadron’s Steve Kornspun.

The key to success, which was obvious to just about everyone, would be clearing Plum Gut before the ebb current started at about 8:45 p.m. Friday, the second evening of the race. The tidal current running through Plum Gut (between Orient Point at the northeastern tip of Long Island and Plum Island, only a mile or so away) can reach a velocity of 5 knots or more, meaning you could spend an awfully long time fighting it. If we could get through ahead of our competition and before the tide changed, it would give us a huge edge. Plum Gut had been our focus for the first 30 hours of the race, all the way from the start at Rockaway. When we passed through well ahead of the other boats, the entire crew heaved a great sigh of relief. At that point, I went below to get some much-needed sleep.

When I turned in, the wind was blowing steadily, and we looked good to sail home to victory.

When Steve woke me shortly after midnight, the picture had changed completely. Now, we five very experienced sailors were in the cockpit, debating our options testily. Nobody really knew quite what to do. We had made it safely through Plum Gut only to have it reach out, grab us, and start dragging us slowly and inexorably back again into its treacherous maw.

The moon hadn’t yet risen, and the sky was overcast, so the Connecticut shore and the North Shore of Long Island stretched off in thick darkness. East and southeast, the hulking shapes of Plum and Fishers islands were just visible in the murky dark. Shore lights, flashing government markers, and the running lights of large commercial vessels ranged around us on all sides, but none were a help in keeping oriented. The chart plotter told us exactly where we were, and the depth sounder was working fine, so we knew we were in 150 feet of water, 6 miles from the Connecticut shore. We had a lot to think about, but nothing suggested a definite plan.

If we hadn’t been in a regatta, the obvious thing would have been to start up the engine and motor-sail home. Since that would immediately disqualify us and we were in first place, no one wanted to crank up the diesel unless our safety was at stake.

In such circumstances, racers sometimes drop anchor and wait for the current or the wind to change. It’s a perfectly legal tactic and can sometimes even be the key to winning the race. But in 150 feet of water and an anchor rode barely that long, anchoring would have been useless. Even if we’d had enough scope, we’d be anchoring well out in the channel — not a good option.

If we sailed toward the shallower water near the Connecticut shore, we’d be in danger of running aground. None of us were particularly familiar with the area, and the tide was rapidly running out. No one wants to go aground in a falling tide in an unfamiliar place in the middle of the night.

However, nobody wanted to be dragged backward into the narrow dark sluiceway of Plum Gut, either. Several of us wanted to claw our way toward the shore until we reached anchoring depth. All of us kept a wary eye out for barges coming too close or approaching on a collision course. No one wanted to quit, but we certainly didn’t want to get run over by a barge.

The situation got worse. I was on the helm with the wheel hard over to starboard when the boat slowly turned to port. We had lost steerageway. With not enough wind, we were completely adrift. We spun around in painfully slow circles, twice.

Then we felt a tiny, barely perceptible coolness in the air. At first no one spoke. It became more definite. Somebody whispered, “Look! Ripples!” The surface of the water, smooth as glass for hours, was now moving. Duet started to answer its helm again, and we heard a faint rustle growing in the sails for the first time in hours. The knot meter kept rising. We were on our way home!

The Around Long Island Regatta is one of several long-distance races that provide a great change of pace from the weekly round-the-buoy races held at various locations around the sound. Some are quite challenging from many perspectives, but the ALIR in particular tests the skills, stamina and sheer determination of any serious racing crew.

In the end, Duet and its tired crew crossed the finish line early Sunday morning, once again in extremely light wind. We came in first in our division.

Jeffrey Taylor, a member of New York’s City Island Sail & Power Squadron/4, is a licensed Merchant Marine Captain and an avid recreational sailor and racer. He has cruised and raced on Long Island Sound for over 20 years and has made several blue water passages to and from the West Indies. This article was originally published in the City Island Sail & Power Squadron Newsletter.