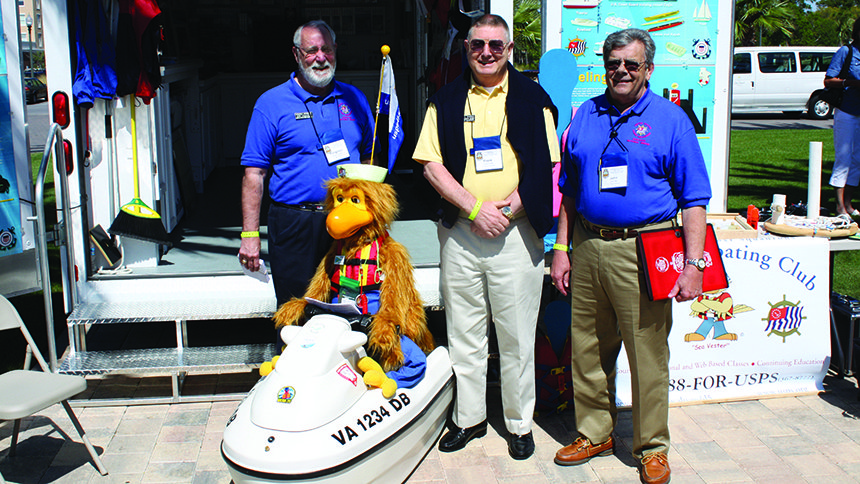 The story of Sea Vester as an educational tool for District 5 began when I saw Seamoor the Sea Serpent astride a land-based personal watercraft at the International Boating and Water Safety Summit in Panama City, Florida, in 2003. The Army Corps of Engineers called it a training aid. I immediately said, “We need one.”

I spoke with Robotronics, who built the ACE unit, and asked if District 5 could borrow Seamoor with the possibility of buying this kind of unit later on. Several District 5 squadrons taught boating safety in middle schools, and a training aid like this would be an outstanding asset.

We took Seamoor to a Children’s Weekend event at the Hampton Coliseum in Virginia. More than 4,000 children attended the event and hundreds came by to talk with Seamoor.

After this overwhelming success, I decided to purchase the first Sea Vester unit. The new training aid arrived at Crisfield, Maryland, in time for the D/5 summer council, which was the first time many members saw it.

Thanks to the unit’s success, I immediately ordered a second robot and trailer since moving the unit from one end of the district to the other meant we had trouble keeping up with all the requests.
Brian Becker became the keeper of Sea Vester North, while I managed Sea Vester South. During the following years, these two units moved throughout the district, supporting any squadron that wanted to use them.

To support our efforts, we received donations from District 5 members, the Golden Rule Foundation, the Henry Sweet Foundation and members of the public. Knowing that we would need a nest egg to cover repairs and maintenance, we deposited the contributions into an investment account.

Once we saw how successful the interactive units were at attracting children and their parents for boating safety discussions, we knew their cost was justified. If we saved one life through this project, it would be worth it.

While Sea Vester talked to children, we would talk to their parents about boating safety, provide a quick knot-tying exercise and invite them inside the trailer, where they could watch a DVD and examine all the items available to keep them safe on the water.

Those who wanted to learn more about membership filled out forms that went to local squadrons. Sea Vester became a regular at the children’s event in Hampton, the Eastern Sports and Outdoor Show in Harrisburg, Pennsylvania, and children’s programs set up by Miles River and Northern Neck Sail & Power Squadrons among others.

Besides moving the units around District 5, we made side trips to the Miami Boat Show and three trips to the Boy Scout Jamboree. During the 12 years we were involved, we supported well over 300 events—some lasting for a day, others lasting two weeks—and moved the units thousands of miles. The stories about Sea Vester would fill a book.

During one Eastern Sports and Outdoor Show, I took Sea Vester to visit the children at Penn State Children’s Hospital in nearby Hershey, Pennsylvania, where several children were able to touch and operate him. It was one of the most emotional and rewarding Sea Vester experiences for me.

Brian had a similar experience at a Governing Board Meeting in New York, when he took Sea Vester to Montefiore Medical Center and spent time with the children there.

So after selling the units, we wrote a check to each facility for $8,240 to benefit hospitalized children and their families.

Brian and I wish both Sea Vester units fair winds and following seas in their new homes.