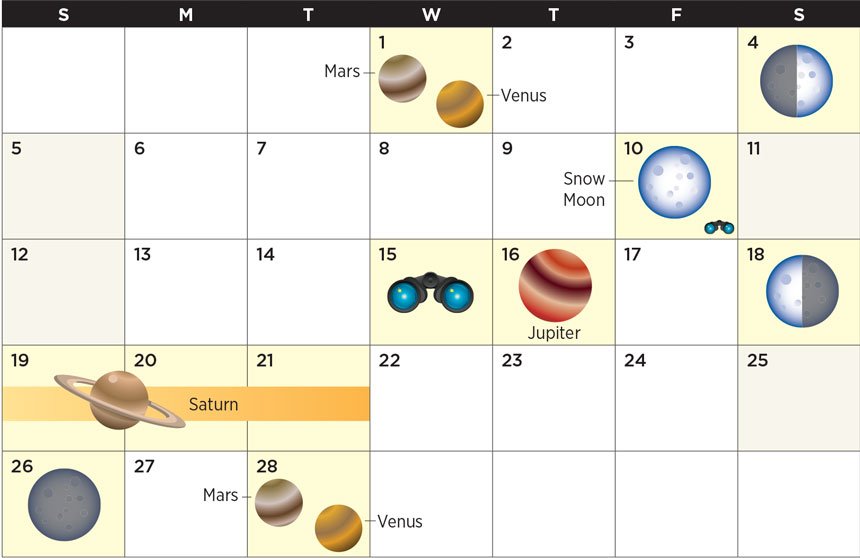 1 Feb     The waxing crescent moon is high in the west at dusk with Mars and Venus lined up to the lower right.

4 Feb     The Pleiades Cluster is 4 finger-widths above the first-quarter moon at sunset, and Aldebaran is 1 fist-width to the moon’s left.

8 Feb     High in the east at dusk, magnitude 1.46 Procyon is 1 fist-width to the moon’s lower right. Magnitude 1.2 Pollux is the same distance to the upper left.

10 Feb    The full moon rises at sunset, followed a few minutes later by magnitude 1.4 Regulus. Late tonight, Regulus is 2 finger-widths to the moon’s lower left. After growing closer, they are separated by less than 1 finger-width before dawn tomorrow.

11 Feb    A penumbral eclipse of the moon occurs shortly after midnight Universal Time. None of the moon is in complete shadow, and only the earth’s outer shadow covers the moon, so it’s not as dramatic as a total or even partial lunar eclipse.

18 Feb    The last-quarter moon lies above the head of Scorpius, the Scorpion. The moon is at apogee, 404,000 kilometers away.

19 Feb    Low in the southeast before first light, the waning crescent moon is less than 1 fist-width to the upper left of magnitude 0.96 Antares. Magnitude 0.6 Saturn is less than 2 fist-widths to the moon’s lower left.

20 Feb    Saturn is less than 3 finger-widths to the moon’s lower left low in the east before dawn.

21 Feb    Saturn is 3 finger-widths to the right of the thin crescent moon low in the southeast at dawn.

26 Feb    An annular solar eclipse is visible only in the South Pacific Ocean, southern South America, the South Atlantic Ocean and parts of Africa.