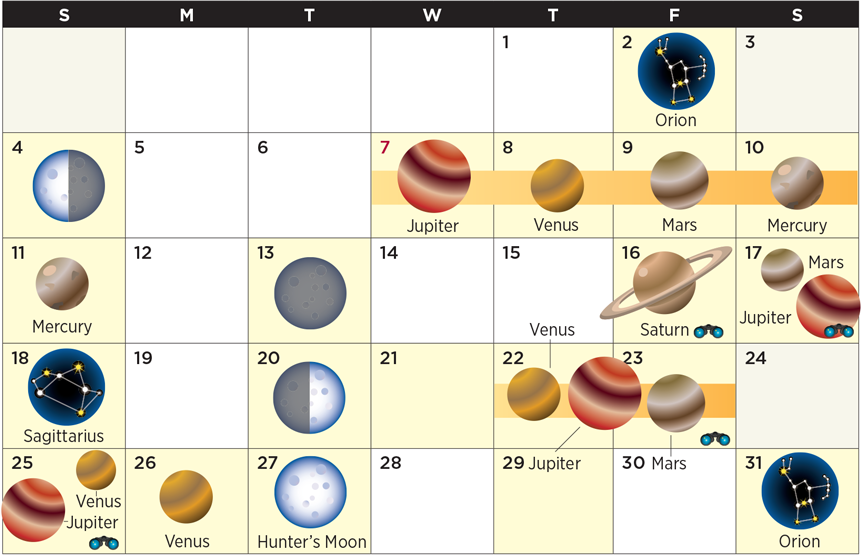 2 Oct      High in the west before dawn, the moon is only ½ degree from Aldebaran. Orion is to the left.

7 Oct      High in the east before dawn, three planets and a bright star line up to the moon’s lower left. Venus is 1 fist-width below the moon, Regulus is 1 finger-width to Venus’ left, Mars is another fist-width to the lower left, and Jupiter is 2 finger-widths beyond Mars.

8 Oct      This morning the moon is less than 2 finger-widths to Venus’ upper right. Regulus is to Venus’ left.

10 Oct     Before sunrise look for Mercury 1 fist-width to the moon’s lower left. Jupiter is 4 finger-widths above the moon.

11 Oct      Low in the east before dawn, Mercury is less than 1 finger-width to the moon’s upper left.

17 Oct     Mars and Jupiter pass within 0.38 degrees tonight. Low in the west at dawn, Mars is to Jupiter’s upper left.

18 Oct     The moon is above the dome of Sagittarius, the Teapot constellation.

21 Oct     The moon lies midway between Altair, 3 fist-widths to the upper right, and Fomalhaut, to the lower left.

22 Oct    From top to bottom, Venus, Jupiter and Mars line up low in the east before dawn.

23 Oct    Venus and Jupiter are separated by the width of 1 finger held at arm’s length.

25 Oct    Separated by ½ finger-width, Venus and Jupiter stand side by side low in the east before dawn.

26 Oct    Venus reaches its greatest elongation, 46.4 degrees west of the sun, and begins its slow journey back toward the sun. Venus remains prominent in the predawn sky for several months before passing east of the sun next summer.

29 Oct    Tonight, the moon is 1 finger-width to the lower left of Aldebaran, the brightest star in the constellation Taurus, the Bull.

31 Oct   Rising 4 hours after sunset, the moon is flanked by Orion to the right and the Gemini Twins to the left.