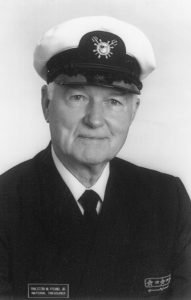 Ralston joined Charlotte Power Squadron in 1969. He earned 41 merit marks and the grade of senior navigator. He served in many squadron and district leadership positions before serving as National Treasurer from 1996–1997.

Ralston was born on Dec. 31, 1920, in Charlotte. He attended N.C. State University and enlisted in the Navy in 1941, where he served in active duty for four years. He later retired from the Naval Reserves in 1969 with the rank of Commander. He was an F6F Hellcat fighter pilot in WWII, became a member of the Fighter Aces Association and was presented with the Congressional Gold Medal.

Following WWII, he joined his father at Pound & Moore, where he eventually became company president, retiring in 1985. Ralston and his beloved wife, Deanie, enjoyed countless happy years at their homes in Dilworth, as well as River Hills and Mill Creek on Lake Wylie.

In addition to his membership in United States Power Squadrons, Ralston achieved 72 years perfect attendance as a Rotarian.

He was preceded in death by his wife, Deanie, and is survived by his son, Ralston “Tripp” M. Pound III (Beth) of Fresno, California; daughter, M. Lynn Pound of Greensboro, N.C.; two grandchildren; and several great-grandchildren.

Thomas Kerr “T.K.” Moore Jr., 84, passed away Friday, Oct. 12, 2018, at New Hanover Regional Medical Center in Wilmington, North Carolina, after a brief illness. He is survived by his precious wife of 61 years, Kathie; his daughter, Mary Kaye Hester of Wilmington and her husband, Deryl; daughter-in-law, Amy Philipp of Charlotte and her husband, Keith; and grandchildren, AB Moore of Portland, Oregon, Ford Philipp of Charlotte, North Carolina, and Andy Nesbit of Appomattox, Virginia.

Born in Charlotte on June 12, 1934, T.K., then known as Tommy, met Kathie at Myers Park High School, where he was a member of the first graduating class in 1952. A lifelong boater, he was an active member of the Charlotte Power Squadron and served in many roles, including commander and as secretary for District 27. He was the driving force behind the organization’s purchase of land on Lake Wylie dubbed Merit Mark Point and the annual barbecue fundraiser he started there is named in his honor.