Barbara Reine, daughter of Paul and Jeanette (Tefler) Reine, passed away on April 27, 2018, after a long bout with Parkinson’s disease and dementia. She leaves behind cousins Doris Snow of Kirkland, and Betty Knutson of Kirkland and Dr. Allister McDonald of Aberdeen, Scotland, a loving life partner, and many friends and colleagues. Barbara was born April 6, 1946, one of the first baby boomers in Lake City and lived her whole life in North Seattle. Her grandparents, Hilma and Ben Reinikainen, built the very first home on Finn Hill. 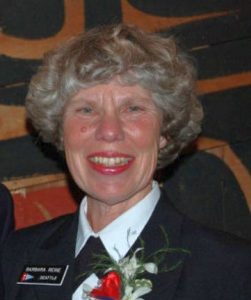 Barb graduated from Ingraham High School and went on to receive a BS degree in biology in 1968 from the University of Washington. She continued in grad school at UW and received a MS degree in botany. Sample collection for her research on lichens took her up and down the entire west coast and to Hokkaido, Japan. She joined the staff of the Botany Department and taught hundreds of students and faculty members the art and science of electron microscopy. She received national awards for the beauty and illustrative science of some of her outstanding electron microscope images of Equisetum (horsetail).

Barbara greatly enjoyed the outdoors, gardening, hiking the Burke-Gilman, and boating, as well as traveling, cooking, photography, and reading, especially cookbooks. Her canine companion, Barney, was never far from her side. She was a member of the Navy Yacht Club Everett, Queen City Yacht Club and Seattle Sail & Power Squadron where she served as commander.

She was active in many civic and professional organizations including the Mountaineers, Wallingford Community Council (serving two terms as president), served as treasurer for one the first international conferences at the (then) new WA State Conference Center and secretary of the Microscopy Society of America. –James Haglund

Charles “Chuck” Bollinger, AP, passed away on 3 Aug. 2015 early in the morning. He has been a member of the Seattle Sail &Power Squadron since 1979. He is survived by his wife, Shirley, of 57 years, Katharine from Juneau (Scott and kids), son Richard, adorable cat, and boat Vala.

We shared many good times with Chuck.  One of my favorite memories is of Chuck laughing during the SSAPS Blues Brothers rendezvous in Brownsville where he dressed up as a member of the blues band.  He always participated in my costume requests and dressed as Walter for our “Big Lebowski” rendezvous. He made fancy grilled pannini sandwiches for our lunch and soup from his boat Vala on the docks. For happy hour he made an incredible layered sun-dried tomato, cream cheese, pesto and pine nut appetizer. Chuck sent out our electronic e-blasts for many years.  We will miss you Chuck! You always had a smile for us.

On 27 June 2015, after 99 years, P/C Carl Larson, JN, embarked on his last voyage. The tides of life have ebbed for a shipmate, and we honor his memory. Carl was a valued member of the Seattle Sail & Power Squadron since 1943 and earned 33 merit marks. He was the SSPS commander in 1961. Carl was our navigation instructor. Carl and his wife, Maxine, enjoying boating on their boat Polaris.

Carl passed away in the company of loving family members following complications from a fall. Carl was born in Seattle to Carl Johan Larson and Augusta K. Peterson. He attended West Seattle High School and the University of Washington, graduating with a degree in electrical engineering.

Carl worked as an engineer with the Boeing Company for over 30 years. He was a life member of the Queen City Yacht Club in Seattle and a 50-year member of the Seattle Sail & Power Squadron where for many years he volunteered as an instructor teaching navigation and boating safety skills to new boaters. Carl was also a licensed ham radio operator.

Carl was most happy when spending time on the water with his family and friends. He began sailing as a young man and enjoyed sailing and cruising in Washington and British Columbia waters every summer for most of his life.

Carl’s lifelong health and vitality were undiminished until only the last couple of years. Friends and family knew him as an accomplished, humble and loving man with an endearing wit and a lighthearted zest for life.  He delighted in helping those around him at every opportunity and would go well out of his way to lend his hand.

Carl is survived by his dearly loved wife, Maxine, with whom he had spent the last 37 years in great happiness as they sailed, hiked, biked, traveled and cherished each other’s company.  Carl is also survived by his son Gregg (Bo) Larson and daughter Kristi Larson, both of whom loved him deeply and feel very lucky to have had him as their father, and by his step-daughters Jan Connelly, Kathy Tankersley and Cindy Brechwald.