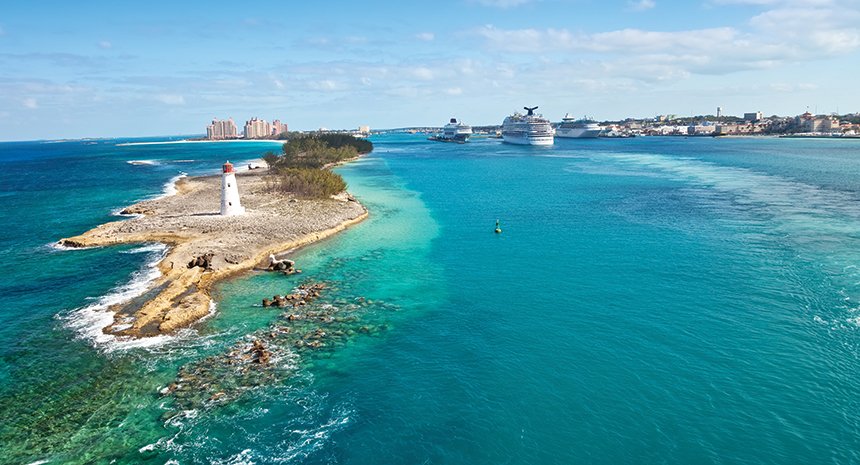 Depending on who is counting, the Bahamas consist of about 700 islands, limestone cays and rocks. A dozen have a significant population; others house a couple of families or a few fishermen.

The area is one large plateau of sediment brought in by the prevailing equatorial current as well as limestone deposited over thousands of years by sea creatures who made the area their final home.

I love the out islands or “Family Islands” as they are officially called. The long, peaceful expanses of beaches combined with the magnificently colored waters and rolling waves can be hypnotic as well as therapeutic. I find Exuma Sound with its myriad coves and beaches to be most pleasant. The waterways around these islands have tricky currents. If you do get into trouble, call the volunteer Bahamas Air Sea Rescue service.

Many cruisers overwinter in Georgetown on Great Exuma, which has plenty of anchoring room as well as good provisioning resources. Don’t be surprised if cruisers come knocking on your hull with an invitation to a “gam.” Lasting friendships form easily here.

Those who make the trip return with glowing reports of air so clean it sparkles, sandy beaches white enough to hurt the eyes, clean water in flashy colors that defy description, incomparable fishing, and an expanded appreciation of our fabulous planet.

Dubbed San Salvador by Christopher Columbus, the island called Guanahani by the locals has improved anchoring and dockage facilities that make it attractive for cruising boaters. Believed by many to be Columbus’ first contact with the New World, the island contains monuments honoring the explorer. We sat in on an archeology course at the local college when puttering around with the archeologists studying Preachers Cave. Hire a taxi and tour the area.

For years our boat’s 6-foot draft kept us out of many interesting places, but a new boat with a 4-foot draft has increased our access to the secluded coves and beaches we used to covet.

The dominant topography is flat, which makes hiding behind something in a blow difficult. Read your charts to find the good holes. The person who tells you there’s “good holding over there” rarely asks what your requirements are.

Throughout the islands, several volunteer-operated weather advisory networks operate reliably repeat reports from the states. Keep tuned to VHF Channel 16, and you will hear them, usually in the early morning. Mega yachts share satellite information if you ask, and we always do. If anything serious is brewing, the VHF will be humming.

Anchoring can be tricky. The prevalent bottom is a few inches of silt over limestone. I have found a single anchor to be preferable, as it allows more choices when frequent squalls move in from the ocean.

When cruising the Bahamas, you’ll need a good guidebook, and you’d do well to learn to read the water colors and to keep an eye on the sky.

Carry tools and spare parts. Suppliers and services are not always where you need them. Groceries and fuel, including diesel and gasoline, are readily available. Many fishermen will swap fish for cold beer or soda.

We have armed many people with a recommended itinerary and sound advice. Those who make the trip return with glowing reports of air so clean it sparkles, sandy beaches white enough to hurt the eyes, clean water in flashy colors that defy description, incomparable fishing, and an expanded appreciation of our fabulous planet.

P/C George Shaw, JN, has been a single-handed blue-water sailor most of his life. As a youth, he learned about USPS when a friend got him into New Haven Squadron’s Celestial Navigation class. This article originally appeared in Crossroads, the newsletter of St. Lucie River Sail & Power Squadron/8.