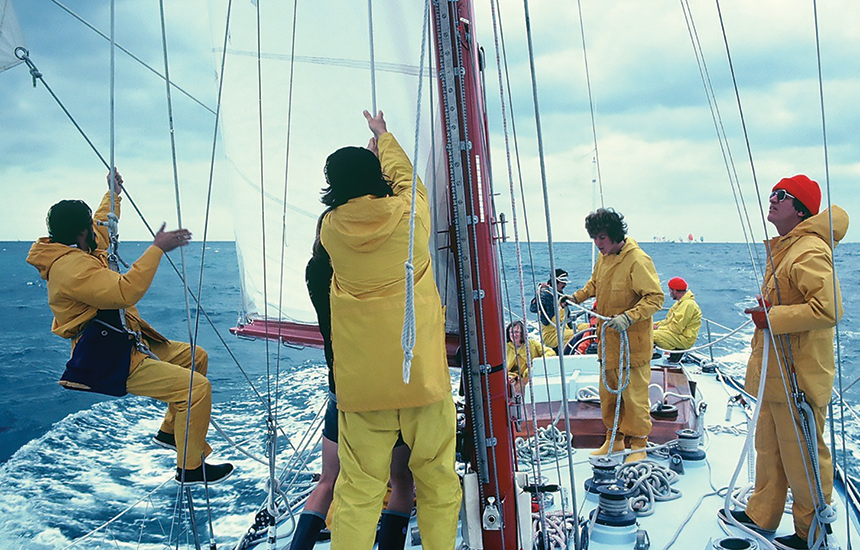 Except for the starting fog, the 1976 Ocean race from Newport, Rhode Island, to Bermuda seemed more like a pleasure cruise than a gale-winds bash. As navigator, I sat in the stern of Ranger, a C&C 61-footer, with the Newport Harbor chart, plotter, pencils and a carefully pocketed pair of dividers. To my left, the skipper operated the intercom to the bow lookout and foredeck leader for fast headsail operations when we shifted to sail.

I had been visually piloting off the Rhode Island shoreline when the shore suddenly disappeared in a thick fog patch. Once we identified the Brenton Reef Tower horn from the other horns around us, we used depth soundings and dead reckoning to get there.

The tower sprang out of the fog like a giant spider standing on the water, with only the leg-like support girders visible. The tower’s top floated in and out of visibility with the passing fog. The spectator fleet sprinkled around the tower kept the lookout busy in the bow pulpit, forward of the Genoa, as Ranger tiptoed through the gaps left by the meandering yachts.

A-WHAM-MO! The concussion from the Coast Guard’s five-inch gun rattled our bones and cleaned our ears. The blast signaled the start of Class B boats and preparation for the Class A start.

We moved out of the spectator fleet into the starting area, reaching down the starting line toward the Coast Guard cutter Alert, anchored 1,000 yards due west at the other end.

As we neared the end of the time allotted to sail the half mile to the other end of the line, a foggy gray outline sharpened into focus. The cutter’s steel bow, with its 5-inch gun forward, looked businesslike compared to our white sailboat.

As we approached the cutter, we tacked. Four big guys cranked the two coffee-grinder winches ­cross-connected by gears to the starboard anthill winch drum. As they cranked, the Genoa jib stretched tight on our port side, and the jib sheet groaned with the last crank that put it under final tension.

We saw other 60- to 80-foot sailboats pop out of the thick fog and sizzle through the water close aboard as we headed to the bunched-up starting line. We counted the seconds to the start. Five, four, three, two, one. A-WHAM-MO!

We departed at 1415 EDT on 18 June with southwest wind at 12 knots and the finish line, Bermuda’s St. David’s Head Light, 635 miles distant. We raced hard on the wind with a course of 141 degrees true and a speed of 6 knots.

As stipulated in the race rules, Loran controls were taped in the off position. Racers could use celestial positioning, depth soundings, a radio direction finder and omnidirectional range radio navigation. However, from the time you leave the continental shelf until about 40 miles from Bermuda, soundings, RDF and OMNI won’t help. You have to rely on celestial positioning.

Lingering offshore fog meant we’d have no celestial sights Friday night or Saturday morning. I methodically plotted our DR based on the deck log maintained by the helmsman, double-checking it with occasional depth soundings.

Thunderstorms embedded in a line of squalls battered us around, but after exiting the stream, the weather cleared to tropical water cruise-ship conditions.

On Saturday, 19 June, I obtained our estimated position with the radio direction finder on Nantucket Lightship 20 miles away. Later I readily obtained sun and moon lines.

Using an overlay of the Gulf Stream’s predicted position supplied by Woods Hole Oceanographic Institute, I plotted our entry point on my chart, and we headed straight for the point of expected maximum push.

Thunderstorms embedded in a line of squalls battered us around, but after exiting the stream, the weather cleared to tropical water cruise-ship conditions. With no tacking or sail changes required, the six-man watches, except for the on-duty helmsman, came on deck to sunbathe.

About 200 miles from Bermuda, the wind dropped to 5 to 7 knots. As we sailed toward Bermuda in the late afternoon, a small object rose over our southeastern horizon. Becoming gradually larger, it finally turned into a small square white sail. As the sail rose higher, beneath it appeared another larger square sail, then another, and yet another as if each one was pushing the one above it. Below them sat the unmistakable dark lump of a hull. A full-rigged square-sail ship sailed directly in front of us.

As we sailed toward each other, late afternoon became twilight, and twilight became dusk. The ship’s red and green running lights glared dead ahead, several miles away. Imperceptibly at first, the ship turned slowly to the right to sail down the left side of our sloop.

In the dusk, we signaled a salute with our flashing light to the now-identified Kruzenshtern, a 376-foot Russian sail-training ship. The ship returned our salute by switching on the decorative deck lights on its perimeter. The deck lights shined upward, illuminating the fully set sails, which resembled a large white night-blooming flower. The light helped illuminate the ship’s distinctive black-and-white hull with simulated gun ports.

Kruzenshtern extinguished its deck lights as it passed, and we could see its calm swirling wake in the starlight as it sailed
toward Newport. The one bright stern light became smaller and smaller before disappearing into the night.

The next evening at sunset a new light appeared in front of us and winked brightly twice.

I had previously made an altitude observation of the sun over our starboard quarter to get a distance off Bermuda. The line-of-position fell just outside of the visibility circle for our height-of-eye of Gibbs Hill Light on the island’s southern tip. Before I could finish labeling the plot and go topside to advise the watch, the light had made itself known.

Once around the northeast end of the island, we would finish offshore of St. David’s Head Light on the island’s south side.

Using the intercom from the steering station to the navigating station below, I got periodic bearings off both lights from a shipmate topside, plotted them, found the ETA to the layline, overstood slightly on purpose (due to shifting wind and known current), tacked on schedule, and raised the Northeast Breaker Buoy. The rest was eyeball piloting.

Close to the end of the race, we made a preliminary finishing report on Channel 6:

I switched over to Channel 9 to report our finish.

“Ranger, this is Bermuda Finish Line Committee. Roger, and welcome to Bermuda.”

We headed for St. George’s Harbour to moor until dawn for the trip through the shoals to Hamilton Harbour.

Powering into the cut through the 50-foot rocky cliffs at St. George’s at 0200 is guaranteed to keep the navigator awake, anxiously glaring at the depth sounder and pointing his flashlight down into the water with a hard stare at the beam of light.

As we throttled back and nosed into the dock at the St. George’s Dinghy and Sports Club, we saw several competitors we had hoped were still at sea.

We moored at a vacant buoy, and I decided to sleep on deck in the quiet harbor with the bright stars overhead. My vivid memories of the race and our cordial welcome to Bermuda faded with onrushing sleep.

Ranger is off and clear.

P/R/C Louis Hohenstein, SN, of Tybee Light Sail & Power Squadron/26 chaired an Educational Department committee. He raced for 10 years in the Southern Ocean Racing Circuit around Florida and in the Bahamas as an offshore ocean-racing navigator. He participated in four Newport to Bermuda races, two of which required celestial navigation.