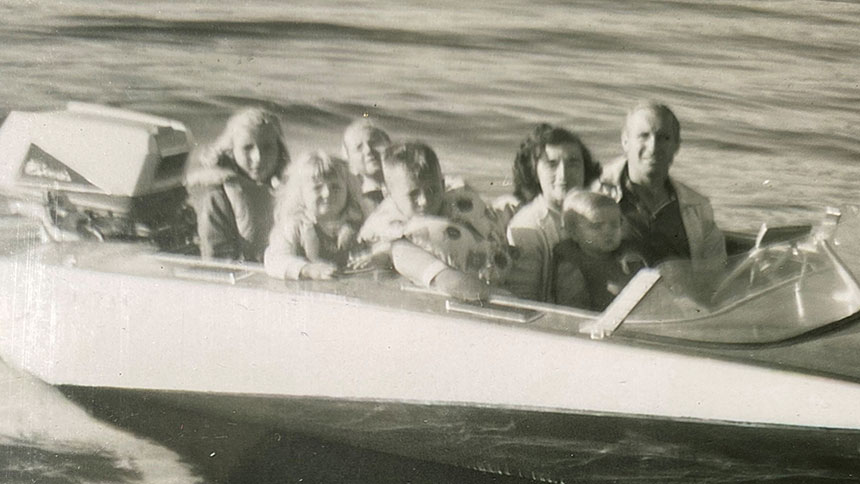 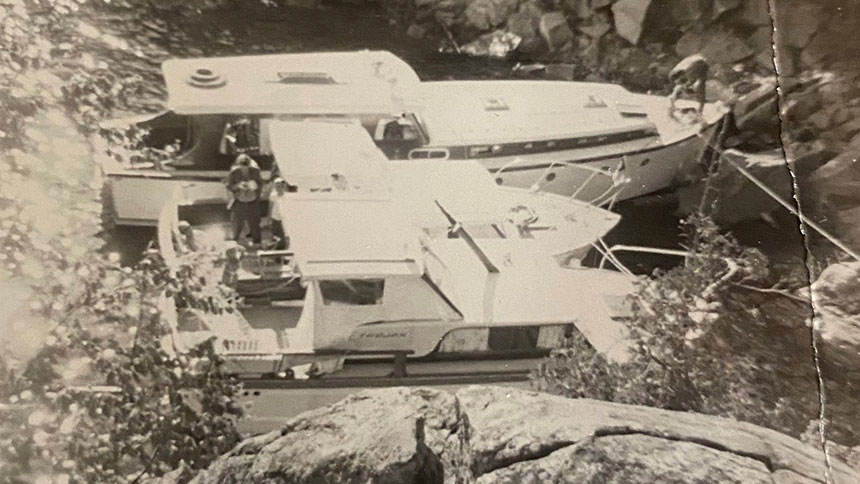 Meanwhile, we children had donned our mandatory properly sized life preservers—a family policy. Dad figured we were all set. We had enough water in the 20-gallon water tank to carry us to the next marina, but he knew challenges could arise.

As we cruised north, a southeast wind picked up speed. Ominous storm clouds moved in, and the morning’s gentle swells became substantial whitecaps. Dad shouted, “Batten down the hatches!” Mom hustled the four youngest children, all movable gear and belongings down the companionway into the lower deck cabin, where she secured the two-burner alcohol stove. The cabin door with a window panel banged shut and was locked tight. The oldest and second mate, I stayed on the back deck with Dad.

By afternoon the rough seas turned into monster waves—at least 7 feet high on the open lake. Yikes! Although stunned and scared, I tried to appear outwardly composed. The endless mountains of water rolling toward us were unfathomable. I imagined our vessel as a fishing trawler in the wind-whipped treacherous Bering Sea off the coast of Alaska. Each roller brought a wide, towering wall of water.

By afternoon the rough seas turned into monster waves—at least 7 feet high on the open lake. Yikes! Although stunned and scared, I tried to appear outwardly composed. The endless mountains of water rolling toward us were unfathomable.

Lying in the port V-berth, my youngest sibling became restless as he lamented his exclusion. Dad cried out, “Hold on!” The curtains shifted. Mom swayed back and forth. An oversized tin of cookies went flying, spewing cookies onto the convertible laminate table, the carpeted floor and into the galley sink. The older siblings clung to each other and their cushioned dinette bench seats as objects slid about the cabin.

On the back deck, vigilance became our number one priority. We watched the wave patterns and size relative to the dimensions of the boat. From the high helmsman’s perch, awareness of the wind speed and direction, coupled with knowledge about the boat’s power, was critical. I drove the boat when Dad needed a break. Through the water-drenched front window, giant waves loomed large and foreboding, cresting in front of the bow. Water cascaded over the wide teak foredeck. Heavy spray coated the side windows, back deck, and main deck stern bench cushions. I pointed the bow slightly angled with each wave and ran at a speed that elevated the bow just enough so that it slid over the waves to minimize pounding and maintain upright control. The boat rose like Champ, the fabled Lake Champlain monster. 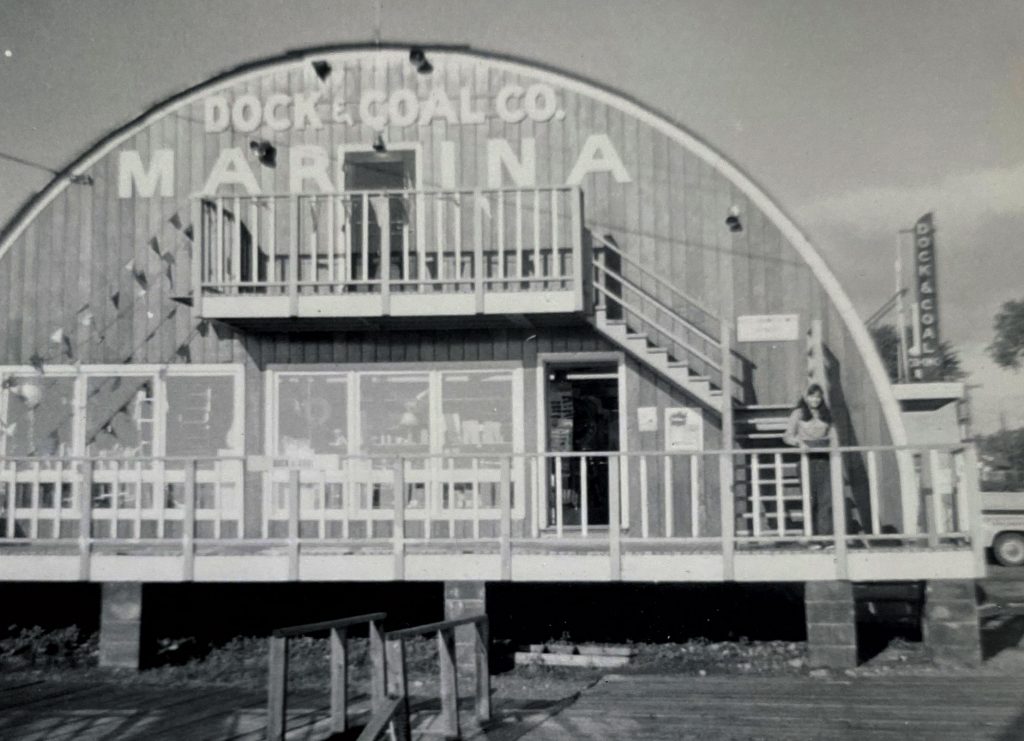 I pulled back on the throttle and briefly rode the wave’s back. Then the boat slid rapidly down into the trough and hobby-horsed up and down. Exhausting and nerve-racking, this rough motion went on for several hours.

Back behind the wheel, Dad used bursts of power to maintain the boat’s optimum position, giving it more power as we ascended. Battling the storm took all our concentration. I maintained a sharp lookout in case random floating logs should cross our path.

Dad kept in radio communication with the other boats, though he had a tough time hearing with the heavy static and roaring wind and waves.
After some time, a barge, sure and steady, passed us by. As captain of the lead vessel, Dad shifted to starboard and dropped into its track, following the relatively calm waters in its wake.

As the Plattsburgh City Marina neared, Dad surveyed the waves, which allowed him to time and execute his turn safely and flawlessly. Finding the perfect moment, he shifted toward the port when he saw either a group of smaller waves or a long trough. The boat veered northwest toward Cumberland Bay, also known as Plattsburgh Bay, before the next wave. Changing direction is dangerous as it presents the beam, the widest and most vulnerable area of the boat, during rough water. Waves crashed over the nearly 2-meter-tall Plattsburgh breakwater. Dad guided the boat safely into the bay, where choppy water awaited. We relaxed a bit once we left the surging lake behind. Dad sounded our electronic trumpet boat horn to signal our arrival. Slowing to a crawl, we finally arrived at our destination.

Under darkening skies and pelting rain, three men with outstretched arms came into view on the starboard landing dock. Their warm welcome was a prayer answered. I cautiously made my way along the rain-slicked gunwale and dropped our silvery white boat fenders into place. Drained by our ordeal, we were grateful that the men helped with our landing and secured the mooring lines under Dad’s direction. Then, with noticeable sea legs, Dad hobbled over to meet the other vessels and assist with their boats. At the first vessel carrying our Montreal friends, Dad jokingly asked, “Ready for ice cream?” 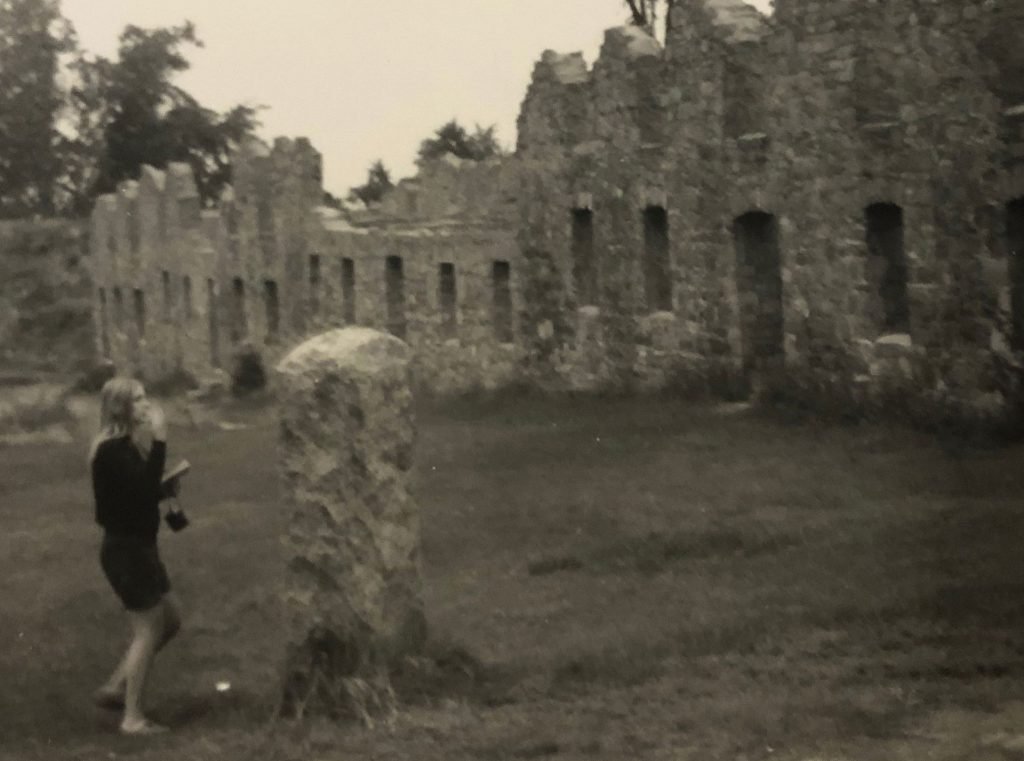 Everyone was safe, and we were glad to reach the security of land. Through this baptism by fire, we learned that you need experience, confidence and conservative boat handling to outwit the sea.

Without a doubt, my father’s quick thinking and his United States Power Squadrons training in seamanship and navigation carried our little cruiser safely over the lake and into port in that storm.

Diane Ptak grew up in the Capital District of New York state. From six months of age, she spent most of her summers on the water with her family. When she was a teenager, her father taught her the nuances of navigational safety and to water ski. Currently, she enjoys kayaking and paddle boarding. She gives special thanks to the members of the Writer’s Bloc of the East Greenbush Community Library—Eric, Matthew, and Rachel Ptak; Marie Capozzelli, William Newton; and Linda Dunn—for their insightful editing, support and seafaring contributions.