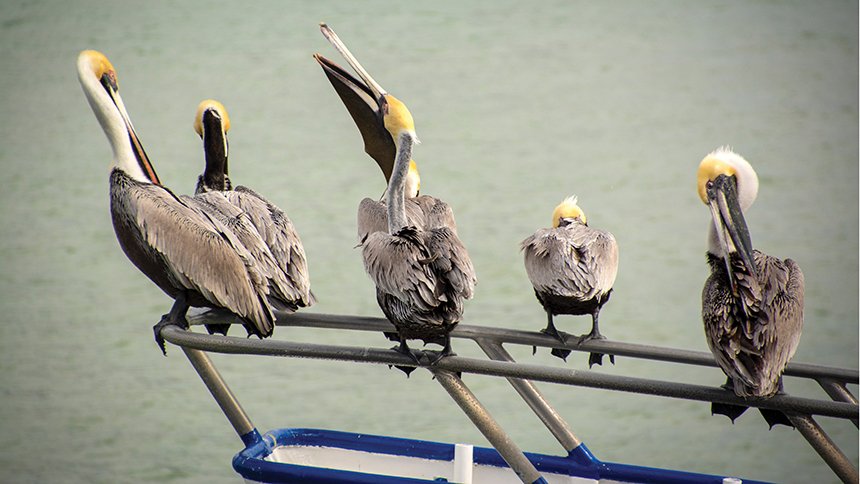 Doug has been experimenting with ways to keep the birds off his boat and has come up with a solution that is both uncomplicated and capable of withstanding wind and sunlight. He uses holographic tape, which scares the birds but isn’t very strong and can be hard to fasten. He came up with a unique means of holding the tape so it stays flat and doesn’t tear. Here’s how he tells it:

I have been having trouble with bird mess on my boat when tied up to my townhome’s common dock. It is on a tidal creek in the South Carolina Low Country, and all manner of shore birds roost and mess on anything near the water. I tried to come up with something that wasn’t objectionable to the other owners but was objectionable to the birds. I think I found a solution that works pretty well. 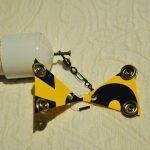 I purchased a yellow plastic “For Sale” sign to use as a base. On Amazon, I found 2-inch-wide holographic Mylar tape, called Irri-Tape, which wildly reflects sunlight and crinkles noisily in the wind to deter birds. I also used several lengths of PVC pipe in two different diameters to fit in my two rod holders and my burgee holder, PVC pipe caps to fit, stainless steel screws, large barrel swivels with solid rings, small swivels, monofilament fishing leader, crimp sleeves and a canvas snap kit. 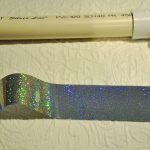 I cut lengths of PVC pipe to fit in the rod holders on either side of the aft end of my 18-foot center console and cut a piece of smaller-diameter PVC to fit in the burgee staff holder on the bow. I cemented a cap on each of these pipes and screwed a stainless steel screw in the end to hold a large barrel swivel on each pipe.

Next, I cut three 2-inch-wide strips from the plastic “For Sale” sign. From the strips, I cut bow tie shapes, which roughly form isosceles triangles when folded in half. I punched a hole on the apex of each triangle and installed canvas snaps on the other four corners: male on one side, female on the other.

I put a loop of monofilament leader through the holes in the apex and threaded it through the split ring of a swivel with an interlock snap. I used a crimp sleeve to secure the leader. 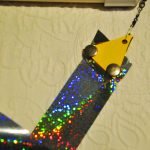 Then, I cut a length of Irri-Tape (whatever length you’d like to dangle below the triangle), laid it in the open end of the plastic triangle and secured it between the snaps that I installed. The snaps go through the Irri-Tape to hold it in place. I clip the interlock snap to the barrel swivel screwed to the PVC pipe. One strip on each pipe is all it takes to create noise and flashing light.

When I place these bird deterrents on the boat, the wind and sunlight keep the birds away. Because I leave my Bimini folded and covered when the boat is docked, I discovered that I need to install a similar device on top of my Bimini cover. I think I will use some hook-and-loop strapping with a similar PVC pipe design, but I haven’t come up with the final design yet. –Douglas L. Carlson