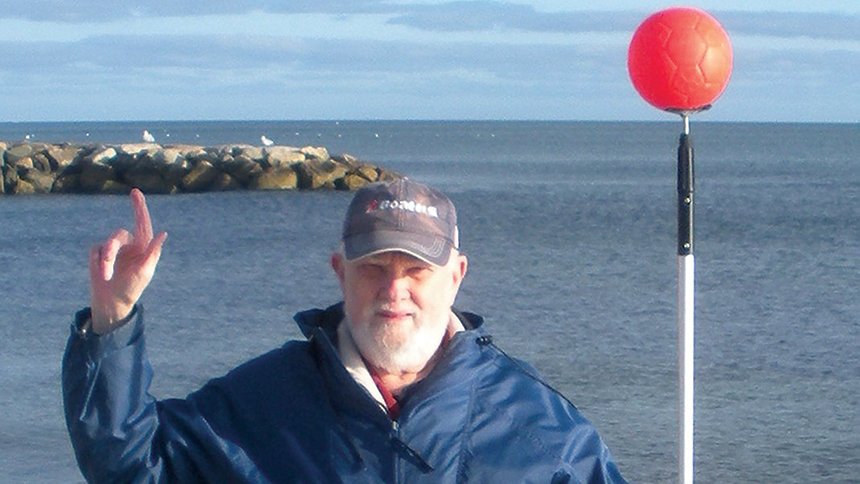 When taking sextant sights on any celestial body, one key measurement to log and feed into the sight reduction calculations is height of eye (HE) above water. On a boat, this measurement is straightforward using a plumb bob and tape measure. However, we commonly teach sextant use at a known location on the beach (or other convenient point on land), so any discrepancy between the student’s observed location and the actual location can be attributed to the quality of the instruments used—the sextant and timepiece—and the student’s skill in using them.

Insisting that the student stand at the water’s edge while learning to perform a demanding task using unfamiliar equipment just to simplify the HE measurement is unrealistic. We customarily designate a spot—on the beach, in a parking lot or at some shoreside real estate—as the known location, but this complicates the HE measurement.

First, using a designated spot for the known location requires adjusting the HE for the tide height during each run of sights. On Nantucket Sound, the difference between high and low tides is around 3 feet. In Cape Cod Bay and further north toward Cape Ann, the difference is 9 or 10 feet, and on the Maine coast, it’s often more than 12 feet. 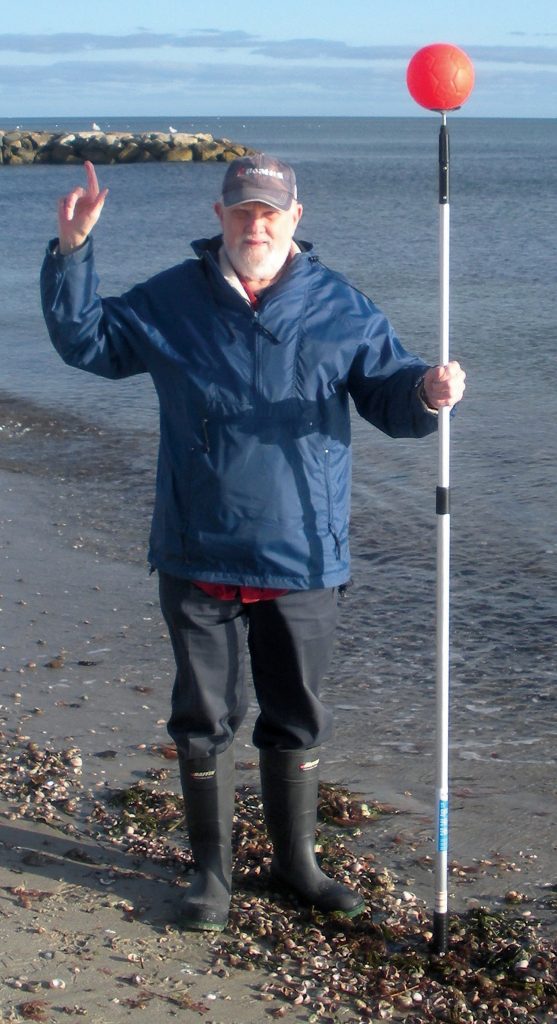 Hugh Blair-Smith with his DIY device

Second, estimating or measuring HE on land is just plain hard to do accurately. As you stand on the beach, you may be able to estimate distance from the water in yards, but it’s much harder to say how far your feet are above the water’s edge.

My motivation to improve the accuracy of HE measurements is to remove HE from the set of uncertainties in obtaining the apparent altitude (“ha”) of each sight. We issue high-quality sextants to students and give them access to highly accurate time standards, so if we refine HE measurements to a high degree, we assure that any discrepancy between the student’s observed location and the actual one are due, as completely as possible, to the student’s level of skill.

I’ve often commented that students’ sights err on the high or low side and encourage them to refine their sextant technique accordingly. But then I thought, “Wait a minute! That effect could be caused by a bias in the estimation of HE.” If we were confident of no such bias in HE, we could say that a skilled navigator would err on the high side about as often as on the low side, and we’d be able to give students more reliable advice.

Of course, other sources of bias exist, like abnormal refraction due to weather and not-quite-level sea levels due to prolonged winds, but the HE problem is not affected by such conditions and is a lot easier to solve.

To address the HE problem, I have created a simple and inexpensive tool that can be used to make the measurement just before each run of sights begins.

The student navigator, in position for sight taking, can look at the horizon past a vertical gnomon that’s standing on a base at the water’s edge held by an assistant.

The tool, a telescoping aluminum pole, can be collapsed when carrying and extended to a practical height when deployed. The top end is fitted with a brightly colored object that can be seen by the student some distance away, probably no more than 50 yards. The assistant, conversing by hand signals with the student, adjusts the length of the extended pole until the bright object appears to be resting on the horizon. When the correct length is achieved, the assistant takes the pole ashore and measures from the bottom of the pole to the bright object on top to find HE to a tenth of a foot for the duration of one run of sights.

The base needs to be waterproof since it will be half awash at the water’s edge. A one-foot square of StarBoard, perhaps one-quarter- to one-half-inch thick with a pipe fitting fastened to its center, would serve. The pipe fitting doesn’t hold the pole, that’s the assistant’s job, it just needs to keep it from slipping off the base. The fitting should be slightly oversize to allow for the base not being accurately horizontal. Since the assistant will leave the base unattended while adjusting or measuring the pole, the base should also have a three-quarter-inch hole near one corner so it can be tethered to shore.

I made a prototype from a twist-and-lock three-part 5–12-foot telescoping pole ($34) using an 8-inch orange ball sold as a dog toy ($6). Some other inexpensive poles with enough reach for most shore locations include the 5–16-foot AdirPro, which costs about $43, and the 6–24-foot Docapole, which costs about $60.

Like my pole, the Docapole is sold for window washing and has a fitting that could hold a similar top mark. The AdirPro is a surveyor’s leveling rod and seems to have no such fitting.

How accurate is the HE measurement provided? It’s exact as regards to refraction, since photons following a curved path from the horizon to the pole will not rise perceptibly further along the path from the pole to the student’s eye. It’s not exact with regard to dip; you could calculate a compensation that would increase HE slightly to account for dip, but even in a fairly extreme case where the measured HE is 27 feet and the pole is 150 feet from the student, a 5 foot dip represents only about 2 inches added to HE. Since HE values in the critical dip table differ by about 8 inches for each 0.1 foot of dip, it doesn’t seem useful to quibble about (at most) 2 of those inches. Furthermore, the maximum change in height of tide during a sight run during a quarter of an hour will be more than 2 inches in most locations. Conclusion: neglecting dip as a contributor to the measurement of HE is unlikely to amount to even 0.1 foot of the amount that dip contributes to ha. In short, the pole measurement is accurate enough for the precision desired.

Hugh Blair-Smith is a member of America’s Boating Club Cape Cod Chapter. The 52-year member teaches Junior Navigation and Navigation and is retired from a half-century career as a computer scientist, of which the first half (as documented in his book “Left Brains for the Right Stuff: Computers, Space, and History”) counts as an Apollo rocket scientist. He is now also retired from a 45-year captaincy of Mashantam, a 35-foot Vindo sloop, cruising the coast between Long Island Sound and Penobscot Bay. His next book, “Minot’s Gifts,” is a sci-fi tale set in the 2070s, about interstellar visitors who have all taken the names of Earth’s lighthouses and are the friendliest aliens ever to touch down at Area 51.