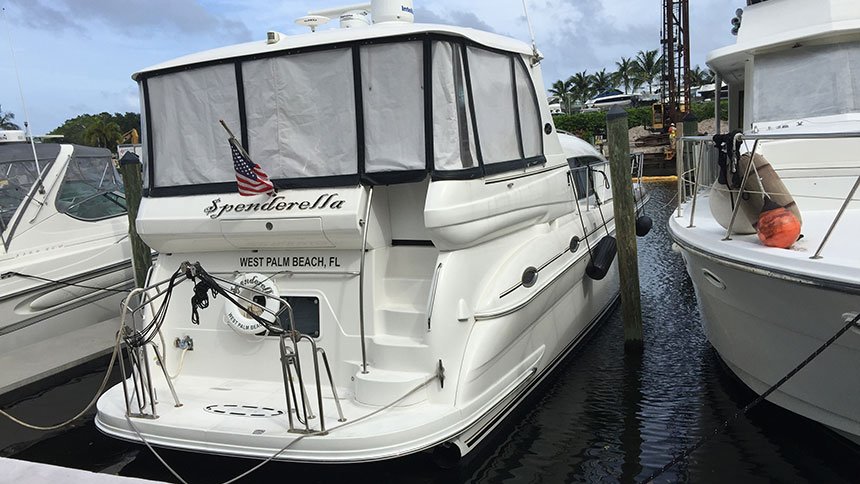 When I bought my first boat, I was 73 and still worked as a local bank CEO. I thought I’d better buy it before I became too old to learn to operate it.

I asked Tom Newman, an old friend, local pilot and boater, if he would help me find a boat my wife, Jeannette, and I would enjoy. We wanted something comfy and big enough to take our grandchildren out for a ride. After looking around, we finally found a 2003 48-foot Sea Ray motor yacht stuck on the bottom of a side canal off the Intracoastal Waterway behind the owner’s house in Vero Beach, Florida. The price was right, and the mechanic thought the boat was worth repairing. After a couple of weeks in dry dock for repairs and a lot of waxing, we had a good-looking vessel.

Next came the task of learning to operate the thing. Tom was eager to teach me the fundamentals, so off we went for several days of training. The boat had two diesel engines and a bow thruster. I had to learn to turn the boat around from a full stop as I came up to the boat slip, spin off the pylon using the bow thruster while sliding slowly against the boat’s rub rails and back into my slip without hitting the concrete dock or the boat next to me.

I soon found out that slow and even slower was the trick to maintaining control. If I was going too fast, I didn’t have time to correct my approach without banging into the dock. I also found out that you don’t put out the fenders until you are well into the slip; otherwise, the fenders could get caught on the pylon.

When backing in, I learned to turn my head around enough to see the stern and the dock. I did this while slowly putting one transmission in reverse and the other one in forward, going back and forth, back and forth until I bounced off the pylons and was far back enough to deploy the fenders.
An experienced boater, Tom had fixed a mid-ship spring line on one of the pylons. When I was backing in, he went on deck and attached the line to a cleat about halfway back on my deck. This line kept me from going too far back and hitting the seawall with my props.

I used this docking method for about a year. At night while trying to go to sleep, I would imagine the docking process. Then one night, I had a revelation. Why not go ahead and turn my whole body around and face the aft full-on? Doing so meant I would have to see the aft as the bow and the starboard transmission would become my port transmission—the same idea for the other side. At first, I had a hard time remembering where the control was for the bow thruster. I also decided not to spin off the pylons with my rub rails. Why not just line up straight and even, centered at the entrance of the slip and back in straight?

I tried it a few times and gradually learned to put my left hand on the bow thruster’s joystick when I needed to adjust direction. I could also alter direction by quickly engaging one of the transmissions for a second as I slowly backed in.

Another revelation: If I had a target on the dock to help me line up straight, I would have a better chance of avoiding the dock and the pylons. My boat is 15 feet wide, and the slip is 17½ feet, so I put a strip of black tape on the sea wall and one on the overhead inside my afterdeck, both lined up to keep me centered in the slip. It worked!

I couldn’t wait to tell Tom and show him my new skill. He was impressed, and I was proud of myself.

All of this sounds great and works well when there is no wind or the tide is not in full swing. As the years passed, I learned to adjust my turns and position to allow for the tide pushing me in one direction or the other or the wind not being in my favor.

And—oh, yes, I failed to mention that I am a U.S. Coast Guard veteran.

In the Coast Guard, we learn to improvise and figure things out. That training has held me in good stead all my working life and now while learning to boat and dock my boat.

Local knowledge, good common sense, showing courtesy to other boaters, safety training, and joining the squadron have kept me and my family and friends safe on the water. –Calvin L. Cearley