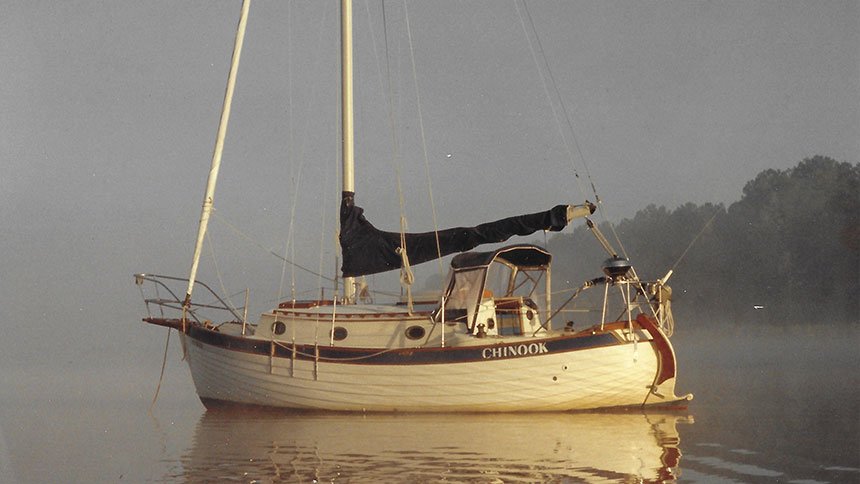 Uneasy about our first ocean passage going from Sandy Hook, New York, to Atlantic City, New Jersey, my wife, Carol, and I found the idea of 2,000 uninterrupted miles of water off the port beam unnerving.

After taking a close look at our charts, I discovered that we could avoid close to half of our exposed travel on the Atlantic by turning in at the Manasquan Inlet. Thanks to Chinook’s shallow draft, we would be able to take the New Jersey Intracoastal and avoid over 40 miles of ocean travel. With a 4-foot controlling depth, the waterway is too shallow for most sailboats.

After entering Manasquan Inlet, we’d take the Point Pleasant Canal into Barnegat Bay. A small notation on the chart next to Point Pleasant Canal read, “Dangerous currents, traverse at slack water.” I got out our Coastal Guide Book, which stated, “Extra caution should be exercised when transiting the Pt. Pleasant Canal. A combination of strong tidal currents, heavy boat traffic, lift bridges, direct and reflected waves, wakes, and chop all combined and packed into a steel bulk-headed canal will require a little extra attention by the captain.” Lastly, I got out our book of tides for the East Coast. When I got to the listing for the Point Pleasant Canal, there was an asterisk that warned of dangerous currents that could create rapids.

In United States Power Squadrons Navigation course, we’d learned to calculate tides and currents. I got out a pencil, pocket calculator, and one of my worksheets and began figuring. Tides and currents are extrapolated from key points listed in the book of tides and vary from day to day, and some areas have adjusting factors. I worked through all the figures twice then let Carol examine my results as a further check. I calculated that we needed to be at the Point Pleasant Canal at high noon the next day for slack water. The strong wind was supposed to drop off so all the boats anchored behind Sandy Point would be making the ocean run to Atlantic City the next day.

We woke up in the morning and realized we had overslept. I looked outside the hatch to see that all the other boats were gone. We were the only boat at anchor. We rushed about to get things stowed, sails ready, and the anchor up. This would put us an hour late for the Point Pleasant Canal, but I had done my calculations for dead slack current, so we should still be OK.

When we left our protected anchorage and entered the Atlantic Ocean, we found the waves large and disorganized due to the refraction off Sandy Hook. Things settled down as we continued along the New Jersey coastline. We had a nice sail, though we weren’t proceeding quite as fast as I had expected.

Eventually, we located Manasquan Inlet, exited the Atlantic Ocean, and headed up the Manasquan River toward the entrance to the Point Pleasant Canal. The canal looked like an oversized drainage ditch. When we got close, we were drawn in like a watermelon seed being sucked down a drain. This did not feel anywhere near slack tide!

I put Chinook in hard reverse, and Carol frantically called the bridge tender for an opening. A New Jersey police boat pulled alongside and asked if everything was OK. We told him we had miscalculated the current and were trying to get a bridge opening before we got sucked under it.

Just then, the bridge tender said over the radio, “Come on through, captain. The bridge is open.” I shifted into forward, and we shot ahead, the shoreline zipping by at an unnatural speed. Greatly relieved to be through the bridge, we rounded a gentle turn in the less than 2-mile-long canal and gasped. Another bridge! Carol dove below and, in a panicked voice, asked for an opening.

“Ma’am, the bridge is open,” came the calm reply. “They radioed ahead you were on the way. Come on through.”

From a distance, the bascule or lift bridge looked closed. It doesn’t open like most bridges; instead it lifts straight up in the air so boats can pass underneath. We zipped under the bridge and heartily thanked both bridge tenders for their assistance.

Like the proverbial watermelon seed, we were spit out of Point Pleasant Canal and into Barnegat Bay. Neither of us found the canal very pleasant.

As for my current and slack tide calculations—I had forgotten to factor in daylight saving time.

After college, John volunteered for the Peace Corps in the Philippine Islands. He has been a childcare worker, a schoolteacher in an Inuit Village, a Las Vegas croupier, a commercial bookkeeper, a casino ship counting clerk, a business accountant, a North Carolina ferry operations manager, a bridge club director and a radio station employee. He enjoys sailing, writing, and duplicate bridge.