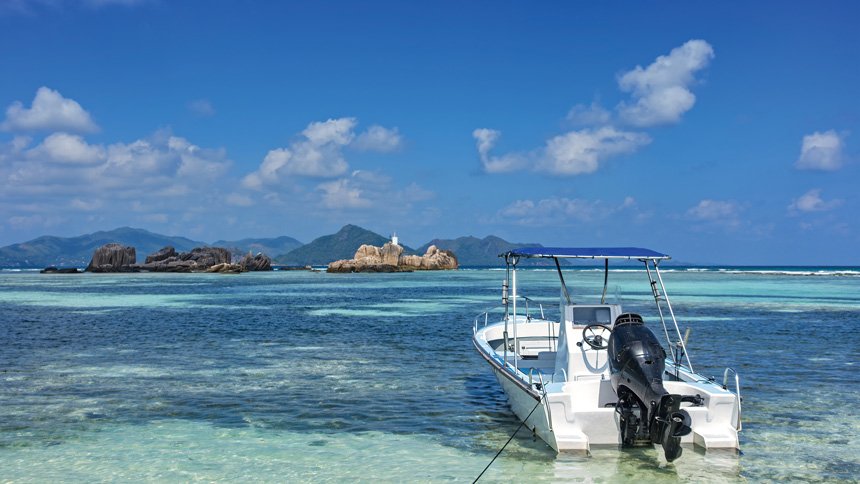 Learn how to fix outboard problems while underway

Most electrical problems that prevent you from starting your outboard usually begin with the battery. Most boats have two batteries and a selector switch. If you have one battery and room for another, consider installing a second one. It’s easy.

Everyone has different opinions on selector switch use. On our boat, we use battery one on odd days and battery two on even days. If the boat hasn’t been run in a while, we’ll switch to both after starting and switch back to a single battery before turning off the engine. Don’t turn the selector to off, even for an instant, while the outboard is running.

Alternating batteries lets us know when a battery is weak, and the odd-even day trick ensures that we continue to use different batteries. We run on one battery so an electrical fault won’t drain both batteries.

If your engine won’t start or quits abruptly, the battery could be the problem. If you hear a click or the motor turns slowly when you try to start, you’ve got a problem with the battery or the connection from the battery to the outboard. Switch batteries and try again. If that doesn’t work, check the battery cables: Tighten loose cables, and clean dirty ones. Pay particular attention to the ground (the black or yellow wires), a common cause of marine electrical problems. Although your batteries should have terminal protectors (boots), make sure the tool you are using never touches any terminal other than the one you’re working on.

If that doesn’t help, set the anchor and call your towing service.

If the outboard slows down when starved for fuel, speeds up as it tries to compensate, slows again and finally stops, a fuel problem is the likely culprit. If your outboard alarm system works, you should get a “fuel restriction” warning.

First, examine the clip on the outboard’s fuel joint, where the fuel hose comes into the engine. The clip can come loose when the outboard is raised and lowered. 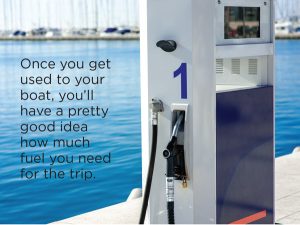 Next, check for water in your separator filter’s see-through plastic bowl. If you see separate water and fuel layers, open the bottom valve to drain the filter into a container. Pump the bulb, and try to start the motor. The bulb’s one-way valve allows fuel to flow only to the outboard. The process goes faster if you hold the bulb with the outboard side up.

Next, check the outboard fuel filter. If you had water or gunk in your separator, it could have clogged your filter. You can take off the filter, usually a plastic cylinder in the gas line, and drain it (sometimes) by blowing into the front side. Remember which way it came out so you can put it back the same way. There should be an arrow to help you.

Next, you can check the fuel pump. Although you can’t do much to fix a broken fuel pump, you may be able to make it home. If you have an older carbureted motor, use your foot to pump the bulb, making it the fuel pump. This can also work on an injected outboard if the low-pressure pump is the problem.

That said, you do have fuel in the tank, don’t you? Never believe what your fuel gauge tells you. If your gauge reads low, you’re gambling. Not only could you run out of fuel, but low fuel and rough seas mixing the crud and water on the bottom of your tank could clog your filters. Most fuel gauges use a tank float system that’s connected to a gauge on the console. The float system can get sticky or even stuck, and the reading depends on the boat’s trim, which makes it less reliable when the tank is low.

Once you get used to your boat, you’ll have a pretty good idea how much fuel you need for the trip. When estimating fuel needs, be conservative and use the rule of thirds: one third to get there, one third to get back, and one third to do it safely.

Outboards use raw-water cooling systems, in which a pump pulls water though an underwater intake, runs it through the engine and back out again. A thermostat won’t let water through until the engine warms enough to get the oil moving. A telltale shoots water out of the engine, giving a visible indication that the pump is pumping. When the cooling system malfunctions and allows the engine to overheat, two things happen. First, you get a warning tone. Second, you won’t be able to run at more than 2,500 rpm or so, as the electronic control module protects the engine from serious damage. 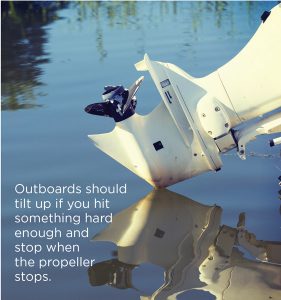 While helpful, the telltale can also be a problem. We all start our outboard and glance back to see if the telltale is streaming. If it is, we happily leave the dock. If it isn’t, we worry. However, debris can easily block the telltale, and because the water pump operates at low pressure, it often allows only a small trickle of water or no water at all. To solve this problem, keep a short length of heavy monofilament (300-pound test or so) or wire on hand to push into the telltale to remove a blockage. If this doesn’t work, watch for cooling problems as you begin your trip, since such problems show up immediately.

Intake blockages are the cause of most cooling problems while underway. Running through heavy weed or one plastic bag can block the intake. If you get a cooling alarm or can’t get above 2,000 to 3,000 rpm, shut off your outboard, lift it out of the water and clean off anything on the engine leg.

Routine maintenance can prevent most cooling problems. Flush your engine with fresh water as often as you can, and flush it with Salt Away or a vinegar solution every couple of months, but not more often.

Rubber pump impellers wear out, especially in water with a lot of sand or grit, so we change ours every 100 hours. Consider changing the thermostat every time you change the impeller, especially if you have a two-stroke. A thermostat fails by getting stuck.

Hitting stuff can also cause outboard problems while underway. Outboards should tilt up if you hit something hard enough and stop when the propeller stops. If you hit something, lift the outboard and look for damage, particularly on the propeller and skeg, the fin sticking down under the propeller. In the Keys, most skegs have no paint because they are always hitting stuff. If you see nothing, a slightly bent prop blade or a piece missing from the bottom of the skeg, you can probably make it home. When you run the engine in gear, pay attention to any new vibration and throttle back until it goes away. We made it home with one and a half blades left on a three-blade prop, though it took two hours to make the 6-mile trip.

Trap buoys are like spider webs for boaters. If you are going fast enough, your prop will cut the line, and you will notice only a hesitation and a loud pop. If the line wraps around the prop, the outboard stops. The trap acts as an anchor, keeping the line under load. You can either cut it free or try to untangle it, depending on your own safety. To untangle it, you’ll need to go into the water. Before doing this, tie yourself to the boat and take a knife with you. Trap lines are usually made of polypropylene, which is stiff and difficult to cut. For all emergency line cutting, we use a twine knife, a cheap, thin serrated blade knife that we replace after each use. Used knives become bait or general purpose knives.

Cutting the line free while inside the boat is my first choice. To do this, I cable tie the twine knife onto the boat hook and use it to cut any portions of the line that are under load. Once that’s done, I can usually untangle the rest of the line using the hook.

Rick Lavoie of Key West Sail & Power Squadron/8 started out with small outboards in elementary school and moved on to sailboat racing. Everything he knows about what can go wrong with marine propulsion he learned the hard way. His boating time is split between an outboard center console powerboat and a cruising sailboat.