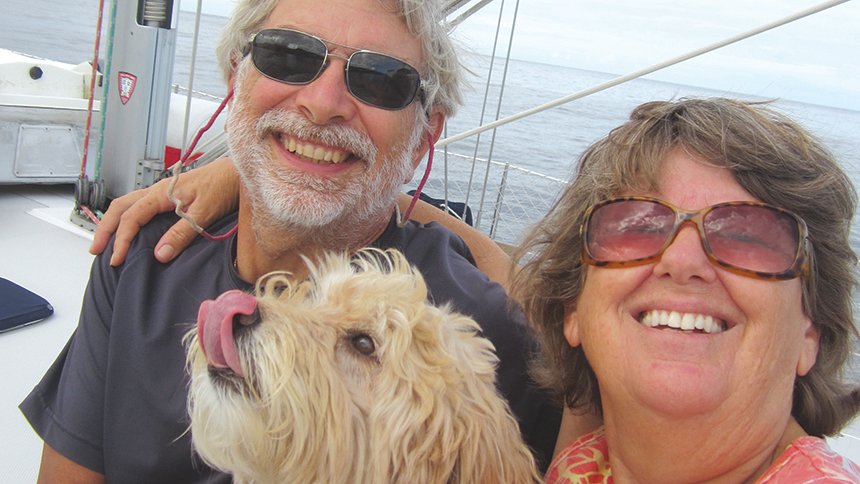 Offshore sailing course teaches sailor to trust herself and her skills

My husband, David, had always been into boating. After taking a United States Power Squadrons boating course, he joined Greenville Power Squadron (now Lake Hartwell Sail & Power Squadron), bought an 18-foot bowrider and later moved up to a 26-foot cabin cruiser. He took all the courses for a full certificate. I joined the squadron a few years later and made it to Advanced Pilot.

After we retired, we planned to move onto a trawler and do the Great Loop while visiting friends in the eastern U.S. and Canada. At some point, David started talking about sailing the Caribbean. It sounded like a wonderful dream, but I didn’t think of it as a reality.

After a week of sailing classes and a two-day final exam cruise with just the two of us onboard, David told me he wanted to sail the Caribbean for a year or two. I wasn’t on board.

“I get seasick, my back hurts from sitting sideways on a sailboat, and I can never get comfortable,” I said. “I’m incompetent at sailing and have no instinct or aptitude for it!”

For three weeks, I awoke in the middle of the night with cold sweats from drowning nightmares. To ease my fears, David signed me up for an offshore sailing class on a 40-foot Island Packet with the captain as the instructor. The other students were two 52-year-old friends I’ll call “Dan” and “Bob,” and “Frank,” a 50-something oral surgeon. We would sail from Florida’s Charlotte Harbor to the Dry Tortugas. The 120-nautical-mile overnight return run from the Dry Tortugas to Charlotte Harbor would take 21 hours.

There and back again

After checking in with the sailing school, I settled in on the Island Packet and helped store provisions. My main objectives for this trip were to find out how much I knew about boating and whether I could feel safe offshore.

We broke into two teams: Frank and I, and Bob and Dan. Each team plotted the day’s course to Charlotte Harbor and down the Intracoastal Waterway to an anchorage north of Fort Myers. We cast off and headed south, anchoring shortly before sunset. It was a cold, blustery night, but the anchorage was snug and calm.

The next morning, we continued to Marco Island. We left the Intracoastal Waterway south of Fort Myers, and set the sails. When we reached the Marco Island sea buoy, we turned east toward the channel. A triangular intersection for crossing or joining the Intracoastal Waterway made the approach tricky and difficult. Dan got on his handheld VHF, the only radio we had, and called the marina to notify them of our arrival and get our slip assignment. Another beautiful, cold and windy day drew to a close.

Early Monday morning, we turned south toward Key West. It was a long day with 25-knot northeast winds mostly behind us. Dan wanted to sail wing-on-wing and set up the sails to do so. I ate peanut butter to quell my seasickness. It was dark when we started into the channel to Key West. Bob was at the helm with the captain standing by. Dan got on the bow with the spotlight to search for the buoys. Frank had a handheld GPS and chart plotter and was on the bow pointing out the direction of the next buoy. I stood next to the Bimini relaying information back and forth. We finally made it to the marina and docked.

We spent the next day in Key West and rented mopeds to tour the city. I’d never ridden a moped before, and I puttered down the narrow streets of Key West. It was easy as long as there was no starting, stopping or turning. Back at the boat, I suggested to the captain that it would be a good time to fuel up. I was told we would be sailing the rest of the way, so we wouldn’t need fuel. Remembering what I learned in class, I reminded them you should have a full tank before heading to a place with no fuel, like the Dry Tortugas. The others voted me down, so we didn’t fill up on fuel or water.

Although I couldn’t man the helm, I regularly asked about speed over ground, course over ground and velocity made good, which always seemed to be in the negatives.

We left early Wednesday for the 70-nautical mile offshore passage to the Dry Tortugas, following the channel markers out of the harbor. We had a great day of sailing and dodging the neat rows of crab pot buoys. Before I knew it, we were circling around the Dry Tortugas to follow the channel markers into the protected anchorage. It was a beautiful sight! The Bonine and peanut butter kept my seasickness at bay. Life was good.

On Thursday the anchorage was full of sailboats, trawlers and fishing boats. We went snorkeling. Saddened by the state of the coral and lack of reef fish, I decided to dry off and tour the fort. The anchorage was abuzz about building seas from the northeast. Most boaters planned to stay a few days until the seas calmed. We decided to head out at 7 a.m. Friday. We would return if the seas got too rough.

We hoisted the anchor and headed out of the anchorage to find the seas had built overnight. We set a course for Charlotte Harbor and started motor sailing into the wind. The seas were around 6 to 7 feet with short intervals. The autopilot couldn’t handle the rough conditions, an indicator that the sails weren’t balanced. When I took the helm, it pulled so much I couldn’t stay on course, so I stood watch.

By midday it was obvious we needed to conserve fuel so we could navigate into Charlotte Harbor and the marina. We turned off the engine and started sailing with reefed storm sail and mainsail. The 10-plus-foot seas pounded the boat and bathed the crew in salt water.

Later that afternoon, Bob came up to the cockpit looking green. I asked if he wanted any of my seasickness remedies; each morning I filled my daypack with bottles of water, to-go peanut butter packs, ginger snaps and seasickness remedies. He said he was fine. Five minutes later he threw up over the side. He went to his bunk and didn’t emerge till the next day.

Although I couldn’t man the helm, I regularly asked about speed over ground, course over ground and velocity made good, which always seemed to be in the negatives. We’d seen fishing boats after leaving the anchorage, but at midday they had headed back to the Dry Tortugas. We saw no other boats.

Frank and I were on duty that night. Clouds blocked the stars, and winds increased to a steady 28 knots. I became anxious. What if we were headed into a storm? What if the seas got worse? My mind was going places I didn’t want it to go. Sitting on the cockpit bench, I tried to ground myself. I closed my eyes and slowed my breathing. The barometric pressure wasn’t decreasing, so we figured we weren’t headed into a storm. We were right. Orion showed his belt eventually, and all was well.

In the morning, I learned we were almost as far from Charlotte Harbor as when we’d left 24 hours earlier. I campaigned for us to turn south toward Marco Island or Key West. With no radio contact, we couldn’t let anyone know we were OK, and my family was expecting to hear from me. I explained that my husband would eventually call for a U.S. Coast Guard search. At this point, the captain may have realized his USCG license could get pulled. (We didn’t have a working radio, except for a handheld, and had failed to get fuel in Key West.) He decided to turn toward Marco Island.

When we saw land, Frank and I started making calls. I reached David and told him we were headed to Marco Island. He asked if we had heard the Coast Guard “All Call” for us. Obviously, we hadn’t.

It was dark when we entered the Marco Island channel. We got a slip at a marina and docked. We secured the lines and went straight to a restaurant for dinner since it was about to close. I tried to brush my hair only to discover I had a salt plaster on it. My black jeans were white. When I got back to the marina, I hopped into the shower. I was shocked at the bruises all over my body.

On Sunday we fueled the boat and motored 12 hours to Charlotte Harbor. The trip was gentle, and I completed the exam underway.
The following January, I signed David and me up for a couples cruising class. The instructor asked about our boating experience. When I told him I had taken an offshore course in November from Charlotte Harbor to the Dry Tortugas, he asked if I was the woman on the infamous Island Packet voyage. Apparently, word of our trip had gotten around!

Libby Cross is a member of Lake Hartwell Sail & Power Squadron in District 26. She returned to Greenville, South Carolina, last year after living aboard Peregrine, a Catalina 42 sailboat, with her husband, David, and their dog, Brody, for five years, cruising the U.S. East Coast and Eastern Caribbean.