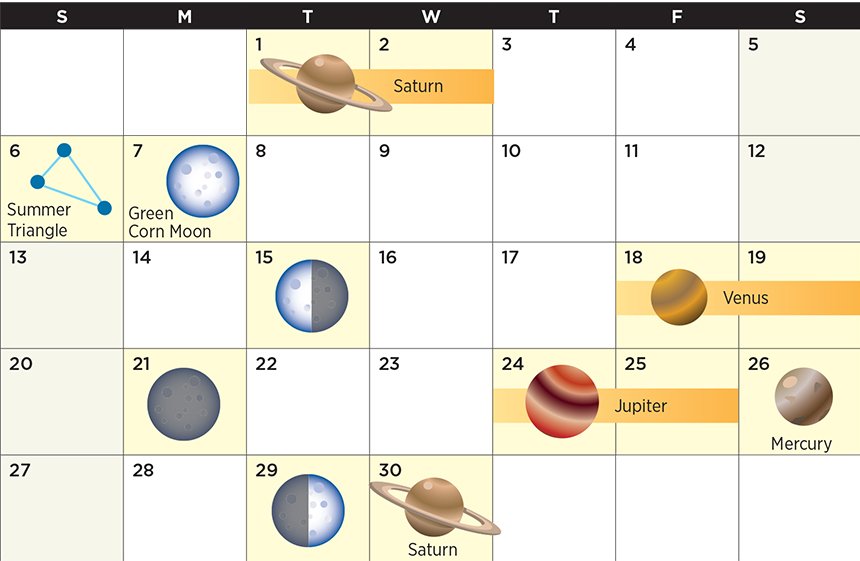 1 Aug    Magnitude 0.96 Antares, the heart of the Scorpion, is less than 1 fist-width below the moon low in the south at dusk. Magnitude 0.3 Saturn is 1½ fist-widths to the lower left.

6 Aug    Rising a half hour before sunset, the moon forms a straight line with Altair, nearly 3 fist-widths above the moon, and Vega, another 3 fist-widths beyond Altair. These stars make up two-thirds of the Summer Triangle. The last star, Deneb, is about 2 fist-widths to Altair’s lower left.

7 Aug    A partial lunar eclipse is visible over much of Europe, Asia, Australia, Africa, Eastern South America, Antarctica, and the Pacific, Atlantic, and Indian oceans.

15 Aug    High in the south before first light, the Pleiades Cluster is 4 finger-widths to the waning crescent moon’s upper left. Aldebaran is 1 fist-width to the lower left.

16 Aug    Aldebaran is little more than 1 finger-width to the moon’s upper right before dawn.

19 Aug    The waning crescent moon is 2 finger-widths below Venus low in the east before dawn. The bright star 3 finger-widths to the upper left of Venus is Pollux.

21 Aug    A total solar eclipse occurs across the United States, with totality covering a 70-mile-wide path from northern Oregon to South Carolina. Do not look directly at the eclipse.

25 Aug    Spica is less than 3 finger-widths below the moon this evening. Jupiter is a little closer to the moon’s lower right.

26 Aug    Mercury is at inferior conjunction, passing between Earth and the sun, just 0.625 AU from Earth.

29 Aug    Saturn is 3 finger-widths to the moon’s lower left at dusk. Antares is 1 fist-width to the lower right.

Totality covers a 70-mile-wide path, making landfall on the northern Oregon coast at about 10:15 a.m. PDT and moving offshore in South Carolina at 2:48 p.m. EDT. The longest duration of totality will be 2 minutes 40.2 seconds in southern Illinois, near Carbondale.

The beginning of the eclipse, called “first contact,” starts more than an hour before totality when the moon’s edge first appears to touch the sun’s edge. “Second contact” occurs when the moon just covers the sun, which lasts until the sun begins to uncover at “third contact.” At “fourth contact,” the last portion of the sun is uncovered, and the eclipse is over.

To see if your location will be in the path of totality, important safety information and much more, visit eclipse2017.nasa.gov.

Don’t despair if you’re not in the path of totality. The continental U.S. will see at least a 55 percent eclipse, which is an experience you’ll always remember.