It is with deep sadness that I let you know of the passing of Dick Patton, S, on February 23, 2021. Dick passed away this morning after successfully completing heart surgery in recent weeks. Dick had been a member of Cape Fear Sail & Power Squadron for 9 years and was Treasurer for much of 2020. Dick completed the ABC course as well as the Cruise Planning Seminar and the Seamanship Course. He loved to talk about being on the water and his knowledge of boating. In fact he was ready to talk about just about anything and was one of the friendliest people I met as a new member. Dick’s positive approach to life and his wonderful sense of humor will be deeply missed by all of us.

Dick and Myra were an important part of the many Pot Luck groups over the years and Dick was always ready to help out with all our events and activities. His contributions and friendship at meetings and events helped make our squadron the community that it is. Our thoughts and prayers are with Myra and the family as they move through this difficult time.

Information about services and a memorial will be shared when available.

Dick will be missed and we send him heart felt blessings for a smooth passage across the bar on his way home. -Otis White

On Dec. 15, we learned that former Cape Fear Sail & Power Squadron member Ed LoBalbo passed away due to complications from COVID-19. He and his wife Sue joined the Squadron in 2011. Ed quickly immersed himself within the Squadron, winning the Corinthian Award in 2012, the Membership Involvement Award in 2013, and the Education Award in 2014. 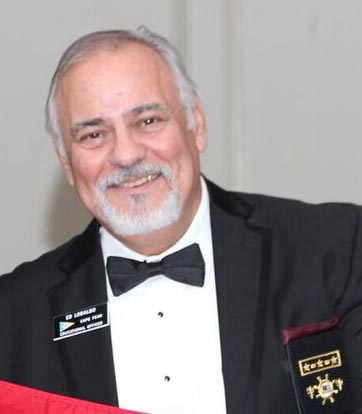 In 2014 Ed became the Squadron Education Officer. Ed came up with the idea after idea to breathe life into the Squadron Education Department and especially our America’s Boating Course. Under his leadership, we revamped the curriculum, added multiple instructors for the day, and added an on-the-water segment that utilized squadron boats to take students out to demonstrate the concepts we had learned in class. His ideas and implemented strategies resulted in many awards for the squadron that continue to this day.

After a few cold winter rides on squadron boats, he came up with the idea of partnering with Wilmington Water Tours and using their 45-foot catamaran as a teaching platform. We had record-breaking crowds of students, and they all loved it.

Ed was a pleasure to watch in the classroom! He took the Rules of the Road section and redid it, casting himself as “Brad Pitt,” repeatedly reminding students that this is what “Brad” would want you to remember. He taught us that these classes weren’t for us but for the students, and we needed to make class fun for them and to always come prepared.

Ed became the Executive Officer in 2017 and brought the same magic to the VSE program. While we have tweaked some things along the way, our success over the years can be attributed to Ed’s vision.

We will all remember and miss Ed as a key flame behind the squadron’s growth and success. We wish him blessings as he crosses the bar on his way home. -Otis J White

Doug was the son of Robert and Genevieve Plzak, raised in Antigo and Columbus, WI. He moved to Michigan to attend college at General Motors Institute (Kettering University) and enjoyed a 37-year engineering career with GM. He was proud to be associated with the opening of the first GM plant in Shanghai, China. Doug’s many interests included motorsports, both as a participant and a spectator, cruising and showing his beloved 1962 Corvette as a member of the GMC Corvette Set and Cape Fear Corvette Club. He loved his Nordic Tugs, cruising the Great Lakes, and seasons docked at the Detroit Yacht Club. Doug also logged many miles of tandem bicycling, completing the 750-mile Paris-Brest-Paris endurance ride, as well as tandem tours throughout the US and Europe.

Another passion was folk music, which began with playing guitar in his high school band the Caliente Trio, to his enjoyment of Wilmington’s talented musicians. Finally, Doug loved football, and even though the Packers sometimes disappointed, he always enjoyed hosting an annual Super Bowl party—34 of them! Recently Doug began volunteering with the American Cancer Society’s Road to Recovery Program and was inspired by the courage shown by patients.

Surviving Doug is his wife of 33 years, Janet; his brother John Plzak (Cheryl) of Fenton, MI; sister-in-law Elaine Wallace (Bob) of Palm Coast, FL, and nephews Douglas Goodman (Donna Tierney) of Raleigh; and Andrew Goodman (Julia Harr) of New York. Also left behind is his beloved Brittany spaniel, Nicki. A celebration of his life will be held on Monday, November 12th at 11 a.m. in Blossoms Magnolia Room, Magnolia Greens, 1800 Tommy Jacobs Drive, Leland, NC. In lieu of flowers, memorials may be made to Doug’s favorite cause, Leader Dogs for the Blind, 1039 S. Rochester Road, Rochester Hills, MI 48307. Online condolences are encouraged and may be offered at www.whitefuneralservicesupply.com. –Cdr Ronald Tilmon

Harriette was born in Wilmington, North Carolina, on Jan. 14, 1927, the daughter of Mamie Applewhite Walsh and Leon C. Walsh Sr. She graduated from New Hanover High School in 1944, and attended Woman’s College at the University of North Carolina in Greensboro. She married William F. (Billy) Wagner in 1950 after meeting him in the church choir, and they shared a loving marriage for 46 years.