Lt/C Mel Faust, N, was the Executive Officer of the Jones Beach Power Squadron when he passed away suddenly May 27, 2015. As a retired New York City Police Officer, his illness was related and a result from Ground Zero exposure during the September 11, 2001, attacks on the World Trade Center in NYC. Mel’s name is listed under “First Responders” and etched on the granite walls of The 911 Memorial at Eisenhower Park, East Meadow, NY. His funeral was attended by many members of USPS as well as the New York City Police Department. Several NYC Police officers in full dress uniform were pallbearers. He received an honor guard salute.

Mel grew up on Long Island and was a long time resident of Lindenhurst, NY. Mel was an active member of USPS. He was always there to lend a hand. A versatile member, Mel was the JBPS web master, editor of the JBPS “Gudgeon & Pintle,” & a VSC examiner, just to name a few. He won a JBPS cook-off with his famous chicken wings recipe. An avid fisherman, boater, and NASCAR fan, he is survived by his wife Julie, son Michael, and a large extended family. He will be truly missed.

It is with great sadness that I report the passing of Past Commander Jim Nelson, AP, on May 5, 2021. Jim’s spent 53 years with the United States Power Squadrons and was a Life Member. Jim’s original squadron was Jones Beach Power Squadron in District 3, head quartered on Long Island.

During his time with his original squadron and the Cape Fear Squadron he amassed 30 merit marks and was a constant supporter and participant in squadron activities. Jim and his wife Janet, who passed a few years ago, will be remembered by all as a fun and involved couple with many friends in the squadron. Many stories about exciting boating excursions and Jim’s love for friends on the water continue and will continue to be told. He was a presence in many lives in the squadrons and we will miss him.

Please keep Jim in your hearts and prayers for a smooth passage across the bar on his way home to join his beloved Janet. -Otis White

James E. Baird, past commander of Jones Beach Power Squadron/D3 and USPS Life Member of 51 years, passed away 19 June 2015.  He was a beloved and honored member who will be sorely missed. 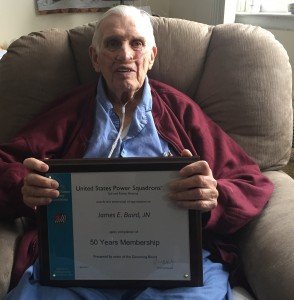