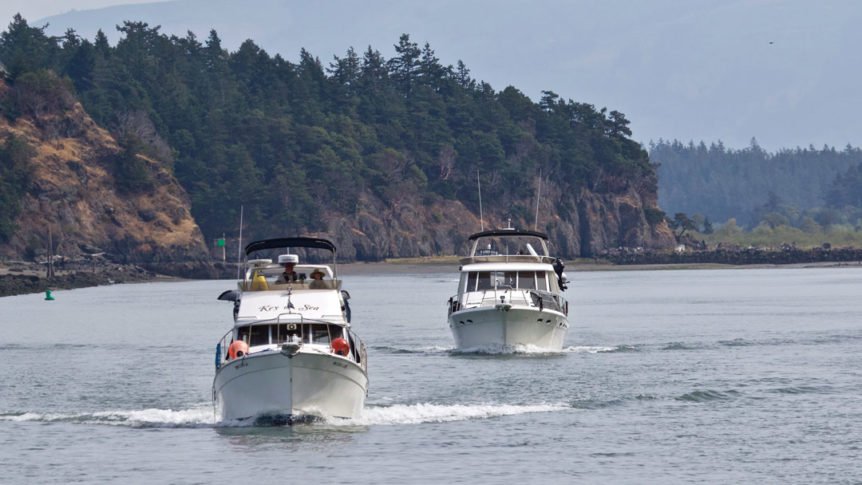 Most of us have a bucket list of things we want to accomplish or places we want to go before heading off to that great marina in the sky. My list of places to visit has expanded along with my experience and the confidence that came with it. Many places on my list are close to home, including Washington’s Swinomish Channel. I kept putting it off because of the horror stories I’d heard of boaters running aground in the channel. In Seamanship and Piloting, I’d been warned that it wasn’t a matter of whether you’d ever run aground but when.

In August 2017, I decided it was time to tackle my next challenge, and with the help of some experienced boating buddies, I headed south aboard Key of Sea.

The planning started months before the departure date. I read about the channel’s challenges in “Waggoner Cruising Guide” and “Salish Sea Pilot.” I spoke with friends who’d safely made the transit; looked at charts; studied Navionics charts, current tables, my WindyTY app and NOAA marine weather forecasts; and only then planned the best course through the channel. Our flotilla left Squalicum Harbor Marina at 11 a.m. We timed our cruise south to the channel opening at 2.25 hours doing 7 knots. We also timed it to arrive in La Conner, Washington, our stopping place for the night, near slack tide.

Entering the channel from the north begins about 0.2 nautical miles from the green number 3 and number 2 red lateral buoys, where the water begins to get shallow. No sense in cutting corners out here: Get lined up between those buoys and start your run as close to the center of the channel as you can. The channel is generally well marked, but where it is not, you should stay to the middle. The transit from the first buoys to La Conner takes about one hour depending on traffic.

We arranged for space on the south basin guest dock and were lucky enough to get an inside tie, which offers protection from the passing boats. The south basin is also closer, only a few minutes’ walk, to La Conner’s shops and restaurants.

If you time your arrival with slack tide, you’ll have little trouble tying up at the dock. If not, you may find you have to do some maneuvering, apply a little more power, or pass the dock to turn around and approach it against the current. Plan ahead, and you’ll do fine.

On day two of our transit, we headed south at low tide, not advisable for those with deep draft boats. Note that as you approach the first lateral buoys, just after crossing under the Rainbow Bridge, the red and green buoys switch sides (red on the left and green on the right), and the numbers begin to count down instead of up. Look for red flashing daymark number 20 to your port. This portion of the channel is much more scenic and dramatic. Transiting at low tide, you will see plenty of evidence of why it’s important to stay in the center of the channel.

At the number 17 green buoy, the channel widens significantly to port in an area known as Hole in the Wall. Don’t be fooled! Stay the course. Look for the red buoy number 16 and keep well to its starboard, lining up with the red number 14 in the distance. The channel narrows again before opening up near green buoy number 5. Again, stay in the center of the channel. You’re not there yet!

Don’t veer from the center of the channel until you’ve passed the final red and green buoys numbered 1 and 2, keeping Goat Island to port. Only then will it be safe to head to starboard toward Deception Pass or to port and points south.

Plan well, stay focused, take no shortcuts, and you’ll have a successful transit of Swinomish Channel.

Michael Guelker-Cone is past commander of Bellingham Sail & Power Squadron/16 and currently serves as secretary, historian and newsletter editor. He and his wife, Leslie, boat in Pacific Northwest waters aboard Key of Sea, a 32-foot Bayliner. This article first appeared in the squadron newsletter, Bell Signals.