Modern VHF marine radios include Digital Selective Calling, a semiautomated method of making radio calls. DSC allows mariners to send instant, digitally coded distress calls to the U.S. Coast Guard and other vessels within transmission range. It also allows selective, digital communication with other DSC-equipped vessels. When a GPS receiver is connected to the VHF radio, your vessel’s location is automatically included in the transmissions—distress or otherwise.

If you need additional motivation to connect a GPS to your VHF radio, just read any boating magazine. A recent article in Seaworthy recounts a sinking in which the captain had two DSC-equipped VHF radios aboard; neither were connected to GPS. With a GPS-connected VHF radio, the captain might have avoided a costly lesson.

Don’t be one of the 90 percent who can’t be found. If you have a DSC radio that is not connected to your GPS, you can easily remedy the situation.

In my case, when my 1976 model VHF marine radio failed beyond reasonable repair, I purchased a new VHF that came with three bare wires for GPS input. Connecting GPS to my new VHF wouldn’t be plug and play, but the minimal work required would ensure that the radio could automatically notify the U.S. Coast Guard of the boat’s position in an emergency.

You have a number of possibilities for a GPS data source to feed to the VHF radio. A dedicated GPS puck receiver makes good sense for a number of reasons:

After selecting your GPS data stream, the next step is hooking everything together. Figure 1 shows the parts mounted in a 1-by-3-inch project box. The box receives the Mini DIN 6-pin (PS/2) plug already installed on the GPS puck receiver, the three wires from the VHF via a stereo plug, and 12-volt DC boat power.

The small project box holds jacks for the input connectors and the circuit card from a standard USB power supply as well as the interconnections. If you already have a source of electronic GPS data, then you might be able to connect it to your VHF with something as simple as a custom three-wire cable.

It works! Figure 2 shows the display of latitude/longitude and time from the GPS on the face of the VHF radio. The radio includes the displayed location data in any emergency or group DSC transmission.

With a little hard work, you too can have the increased safety that comes from including your location with digital calls. Compared with commercial ways of achieving the same performance, the cost of this do-it-yourself project is miniscule. By doing it yourself you have the satisfaction of knowing how it works and how to fix it. To top it off, the interface box has a USB jack to charge 5-volt DC devices. 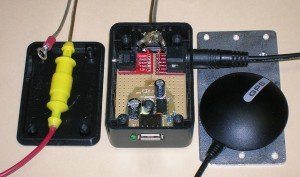 Figure 1: The GPS puck receiver and 12-volt DC supply cable connected to the open interface box. The VHF plugs in from the left. The lid is left, and the mount plate, right. 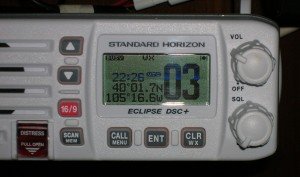 Figure 2: Latitude/longitude and time from the GPS are displayed on the VHF radio after adding a DIY interface box and GPS puck to the boat’s electronics. The green light is the pilot for the interface box.

Cdr Ron Schwiesow, JN, has been a member of Colorado’s Boulder Valley Sail & Power Squadron since 1987. He and his wife, Nan, enjoy trailer sailing their Balboa 8.2, Romsø, from locations as varied as Desolation Sound in the Pacific Northwest, Downeast Maine, Florida’s St. Johns River and points in between.