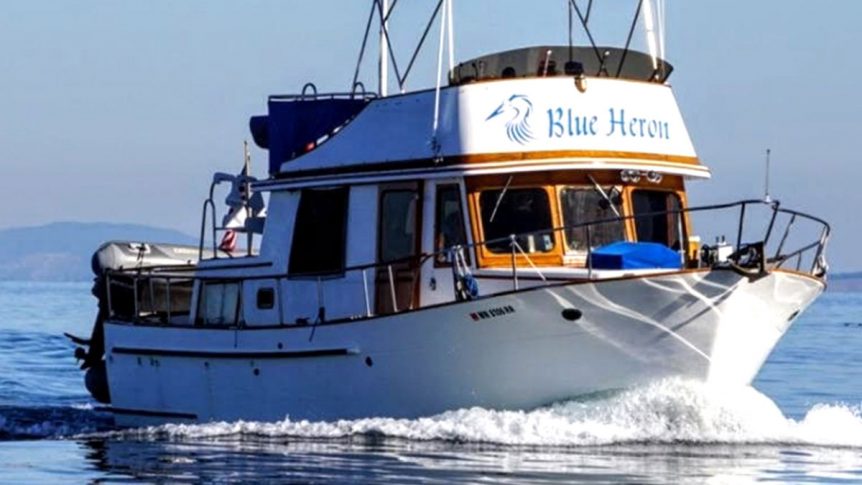 Blue Heron, a 34-foot CHB trawler, gets a new home and a squadron gains new members as told from both the sellers and buyers point of view

THE SELLERS: Retiring boaters Ray and Nila Madsen pass along their beloved boat and their boating knowledge

We purchased our first boat, a 24-foot 1979 Bell Boy, from Dick Schoel. We had no boating experience. Thank goodness it was a sturdy boat.

Dick taught us how to start and run the boat, but after watching our docking, he said, “We don’t know if you are religious people, but we have been praying for you two.”

We practiced docking in the early mornings so no one could see us. Ray would be at the helm, and Nila would run up and down the dock snatching lines and trying to prevent the boat from hitting the dock.

We crossed the strait to Friday Harbor on our second boat, a 24-foot Bayliner Classic, on a day we should never have been out (wind, fog, swells and rain). Friends accompanied us on their boat, and we assumed they knew more about boating than we did. We didn’t know what we didn’t know!

Bob Stem encouraged Ray to join a boating club. Although not interested at first, Ray joined to take Marine Electronics with Bob. He learned some important things about boats and enjoyed meeting the instructors and class members.

Because of that class, we joined North Olympic Sail & Power Squadron/16 and attended our first dinner meeting, where we met some fun people. Afterward, we took more classes and clinics, including Gary Yaruss’ Weather course, which we took three times.

Nila took Engine Maintenance and walked in wearing coveralls and red high heels. She had grease on her face, a pink rag hanging out of one pocket and a wrench in the other. Yup! We enjoyed the people and learned a lot about what we didn’t know.

North Olympic Squadron allowed us to learn safe boating in classes and, best of all, during scheduled cruises. With other squadron members, we cruised to the San Juan and Gulf islands, Vancouver Island, the Sunshine Coast of British Columbia, and up the beautiful and breathtaking Princess Louisa Inlet to Chatterbox Falls. Life could not have been better! Boating and dock parties with lifelong friends and unparalleled beauty created memories that will last forever.

At one point, Nila said, “If we are going to cruise like this, we need a bigger boat.”

Our third boat, the Blue Heron, was a 34-foot CHB trawler. Every year we had the trawler, we averaged over 200 hours. Weather permitting, we cruised from January through November. Our dogs, especially Gibbs, loved boating as well.

After getting so much from our membership in North Olympic Squadron, we felt that we, too, needed to pay it forward. In our final boating chapter, we shared knowledge and made new friends. We have both taught classes and clinics and have had the privilege and honor of serving as squadron commander.

As we prepared to retire from boating, Ray became concerned about who would buy Blue Heron. Would it be just a boat to them? Or would they love it and enjoy it as we did?

A wonderful couple from Blaine, Washington, Don and Rhonda Zwade, seemed to be just the right people. Although they had little boating experience, they wanted to learn and fell in love with Blue Heron.

Ray spent many hours showing them the boat from stem to stern and telling them about United States Power Squadrons, America’s Boating Club. After we reached a deal, we arranged to provide Don and Rhonda two days of on-the-water, hands-on training. When they returned to Sequim to pick up the boat, Rhonda had completed America’s Boating Course online and they had become members of Bellingham Sail & Power Squadron/16.

In the same bay where we had learned on our first boat, we taught the couple how to master a 360-degree turn with a single screw without using a thruster. From there, they both practiced docking in an empty slip and then with another boat alongside.

The next day, they hooked mooring balls, anchored, and put the dinghy in the water to take a trip around the bay. We spent time going over the electronics and learning about laying out a course using the chart plotter and Navionics on a tablet.

When we had a two-day window of good weather to cross the strait, Don and Rhonda took control of Blue Heron with Ray riding along. Our friends, the Lewises followed on their new boat. Don and Rhonda followed the waypoints with confidence and safely docked Blue Heron at Deer Harbor marina.

The next day, Ray boarded the Lewises’ boat and headed back home, while Blue Heron’s new owners made their way to the boat’s new home at Semiahmoo Marina in Blaine. –Ray and Nila Madsen

THE BUYERS: Don and Rhonda Zwade find their dream boat and a new boating family

We’ve lived in Whatcom County for 19 years, and before that, we lived on Maui for 12 years. Both of us have always loved the water and fishing, but we’ve never owned a boat besides our little aluminum fishing boat.

When we considered buying a bigger boat to explore the beauty of the Pacific Northwest, we looked at slower cruising trawlers. We searched the for-sale ads and had no idea what we were doing. A beautiful, well-cared-for 1979 34-foot CHB trawler in Sequim showed up on Facebook Marketplace at the beginning of September. Rhonda responded to the ad and began corresponding with the owner. Don wasn’t thrilled about traveling to Sequim to check it out, so we never went to see the boat and figured someone else bought it.

At the end of October, the owner sent a follow-up message to let us know that the boat was still available. He planned to hand it over to a broker within the week, but he would sell it to us at a discounted price if we were still interested.

After making the trip to Sequim, we spent six hours with the owners and made a deal to buy Blue Heron before we left.

The boat’s previous owners, Ray and Nila Madsen, were active North Olympic Sail & Power Squadron members, where both had been commanders. They were selling their boat and home and moving south to Arizona.

Before moving, they spent one weekend in early November teaching us everything we needed to know to get Blue Heron to Semiahmoo safely and dock without hurting anyone around us. We learned about anchoring, mooring balls, dinghy basics, docking, 360s, line handling, basic engine maintenance, basic navigation, basic electronics, fueling, and more.

On Nov. 10, Ray rode along with us to Deer Harbor and sent us off on our own to Semiahmoo the next day. We’ve been pinching ourselves ever since.

After taking an overnight trip to Sucia Islands on Thanksgiving weekend, we can’t wait to start cruising this spring. In the meantime, and probably forever, we want to learn as much as we can. We look forward to being active members of Bellingham Sail & Power Squadron! –Don and Rhonda Zwade