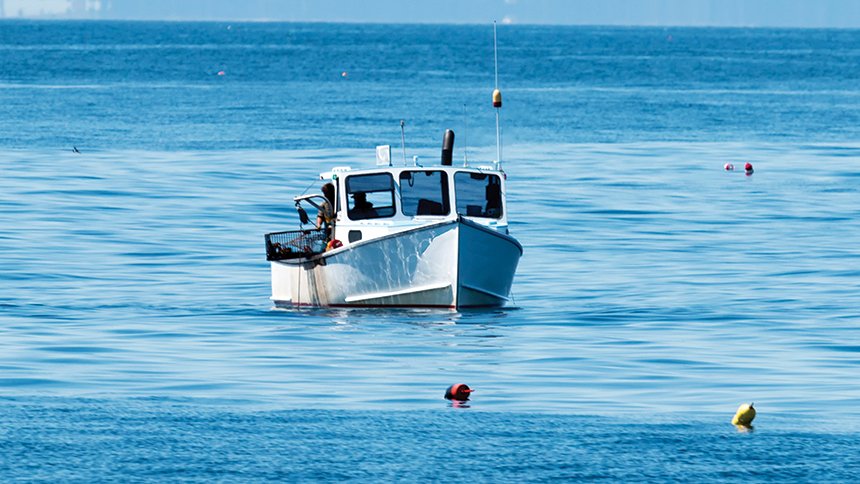 Maine waters have a reputation for being chock-full of lobster buoys. Any boater who’s spent time there will agree.

On a three-week District 12 trip in 2015, every boat’s pilot spent considerable time avoiding the numerous lobster buoys as well as their pesky big brother: lobster buoy with toggle, which gives the boater two opportunities to snag a line for each pot lurking below.

I don’t know how the other boats fared in avoiding these floating hazards, but every time I turned on my autopilot, a secret, undocumented function would home in on the nearest lobster buoy, requiring much manual steering. By our last day in Maine, we had avoided snagging a lobster trap line or buoy, and I thought we’d dodged that bullet.

Our trip out of Maine waters was from Potts Harbor on Harpswell Neck to Isle of Shoals, about 50 nautical miles. We left early and motored along at about 6 knots since the winds had not yet built. Around 7 a.m., about 5 miles into our day, I was at the wheel when all of a sudden my engine rpm dropped, and I had no power. Running in reverse then back in forward made no difference.

Something was on my drive train or prop.

I turned to my boat mates, Tom and Barbara, and declared with little conviction, “I know I didn’t hit a lobster buoy. I was watching carefully.” While they were kind enough not to utter their doubt, I could see it in their eyes. “I don’t want to go in the water,” I said, having already concluded that’s where I was headed.

The water was about 60 degrees Fahrenheit, not cold enough to inflict instant hypothermia but not warm enough to be even remotely inviting. The last thing I’d thrown on the boat before leaving for Maine was the dry suit I’d commandeered from my son when he left the college sailing team and no longer had to brave Lake Michigan waters in November and March.

Having never worn a dry suit before, I was full of apprehension engendered by my considerable experience with thin wet suits. I had read that the trick to dry suit comfort was layers underneath. So I put on sweat pants and a long-sleeve shirt and wriggled into the dry suit. Wet suits are uncomfortable and quickly make you feel nauseated while bobbing around on a boat before getting into the water. The dry suit felt different; the only discomfort came from the tight seal around my neck.

With no more excuses, I put on my mask and snorkel, grabbed my sharp line cutting knife, and jumped in.

It was great! I was warm, comfortable and dry. It was like stepping out in 60-degree air with a coat on. I quickly looked at my prop. Wrapped around it was not a lobster line as I had feared, but a rugged, fibrous white bag, the kind you would find feed in at the farm store. After one more breath, I quickly cut the bag, allowing it to come off the prop. Less than two minutes after jumping into the water, I had solved the problem, and a few minutes later, we were on our way again.

I was glad to be vindicated in my claim of not hitting a lobster buoy, and even gladder that in about 15 minutes we went from “dead in the water” to “all is well.”

An avid sailor and boater, Andy Sumberg has been active in United States Power Squadrons since 1997. As the Educational Outreach Committee chair, he is responsible for interactive online seminars. A member of Charles River Sail & Power Squadron/12, he teaches Junior Navigation and Navigation. Andy lives in Newton, Massachusetts, and sails out of Westport, Massachusetts, whenever the weather permits.