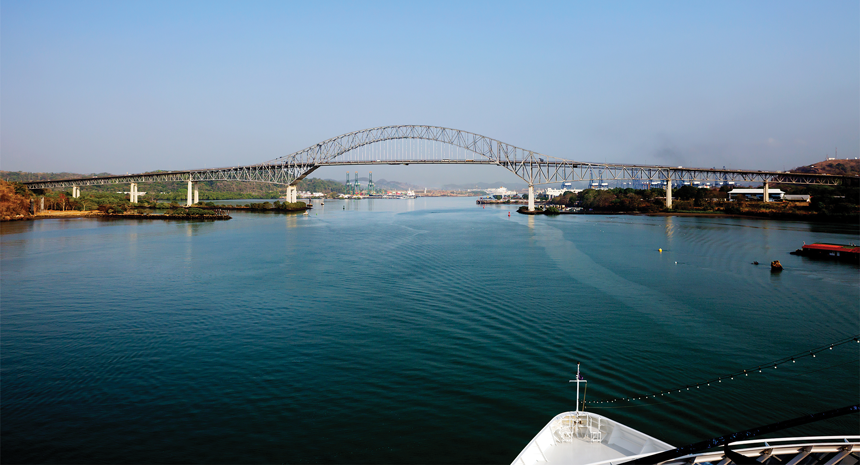 Sailing through the Panama Canal and back

After sailing Hope and Glory, our Island Packet 420, down the Central American Coast, we arrived at the Panama Canal Yacht Club in Colon on a dark night to await transit through the canal. We looked around in dismay to find the harbor crammed full of sailboats.

“Let me have a go,” John, an English crew member used to crowded English and Mediterranean coasts, said as he took the helm.

“There’s no space anywhere,” we chorused, but John sailed slowly ahead.

“Aha,” he said, spying a 5-foot space between two sailboats. He moved the bow cautiously between them and edged the 13-foot hull slowly forward. Then he ran across the deck, jumped on the dock and secured a mooring. “All done,” he said. “I’m going to bed.”

Our line handlers arrived early next morning. Bolivar, a striking, muscular Panamanian in his 50s, was a Panama Jack look-alike, with his heavy mustache and wide-brimmed Panama hat. Bolivar articulated a simple philosophy, “Every day is good.” One, who called himself Dracula, had one wandering eye and one covered by an opaque membrane. His head leaned heavily to the right, and his shirt and pants loosely covered his thick body. His teenage grandson Juan, who was learning the ropes, sat alone listening to his headset. The fourth line handler kept to himself, and I never learned his name.

I’d wanted to transit the canal since watching “The Building of the Panama Canal” on the Discovery Channel.

The line handlers and pilots had been hired by Tina, an agent we retained in the U.S. to make the arrangements and secure the costly permits required to transit the canal. Without her, we’d have been waiting around for weeks.

Dracula, our self-appointed driver, took me to get provisions for the four- or five-day trip through the canal and back. Most sailboats continue on, but our goal was simply to transit the canal, something I’d wanted to do since watching “The Building of the Panama Canal” on the Discovery channel three or four times.

Cars and buses fought for space on the streets of Colon. Drivers blew their horns, cursed each other, and drove over sidewalks and median strips to cut each other off. The large, well-stocked market was guarded by a man with a sawed-off shotgun. Dracula suggested foods for the line handlers. As we left the market, a boy seized the cart and unloaded the groceries into the taxi. He thrust out his hand for a tip as Dracula watched the transaction closely.

On the way back to the Panama Canal Yacht Club, I photographed the city and its inhabitants. Dracula refused to slow down. He said it was too dangerous and cautioned that someone would grab my camera if I continued to hold it out the window.

When we reached the yacht club, the guard opened the gate, and I wound my way down the cracked, narrow concrete path to the dock with the groceries, avoiding the ant nests and stray dogs and cats seeking refuge from the brutal sun. 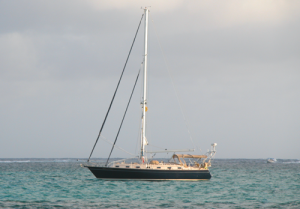 Hope and Glory waits in the flats

At the dock, the line handlers had tied tires to the lifelines to protect the boat from the lock walls and coiled the handling lines neatly on deck. Other sailors stopped by to inquire about our transit and borrow charts.

The line handlers gave a final tug to the tires attached to the lifelines and climbed aboard Hope and Glory. We cast off promptly at 1730 and headed for the Flats to wait for our pilot, who would begin our transit through the first lock at 1930.

I fixed an early dinner so we would be ready to leave at 1930. The line handlers chatted on deck, and Joe and I sat in the cockpit with our friends John and Glynn, experienced English sailors, who had joined us for this part of the trip. We got a radio call saying we were delayed until 2230. We were disappointed because now it would be dark when we entered the first lock.

The pilot finally arrived, an officious man who sat in the cockpit talking to the control tower on his radio and paying us little attention. After spending three and a half months sailing down the Central American coast to Panama, we were finally ready to transit the canal. At 2230, the pilot got a signal and indicated to Joe to proceed to the first lock. We fell in behind an enormous black Russian freighter and motored into the Gatun Locks. 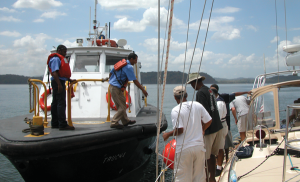 Our pilot comes aboard

The line handlers sprang to life and took their posts at the bow or stern. When their counterparts appeared at the side of the lock, the line handlers hurled the long lines with lead monkeys on the ends up to the waiting men, a process choreographed like a ballet. The lead weights help the lines reach their target, and the lines keep the boat from twisting and hitting the walls after the enormous steel gates close and 52 million gallons of water rush into the lock.

The freighter rested against the side of the lock, and we maintained a short distance behind. Overhead lights illuminate everything as the canal operates 24 hours a day. We were told that the canal has operated continuously since 1914, except for three hours at the beginning of World War II.

The locks raise the ships from sea level to the level of Gatun Lake, 80 feet above. When the lock filled and we reached ground level, the lines were thrown back onto the boat. The pilot ducked out of the way. Apparently, disparity in pay and prestige causes considerable hostility between the line handlers and the pilots. Dracula told us there’s a bonus for any line handler who hits a pilot with a lead monkey.

We motored out and were directed to Gatun Lake. The huge, 423-square-kilometer lake created when the dam was built over the Chagres River holds boats over between locks, and we spent the night there. 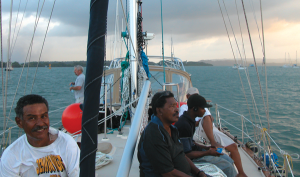 The line handlers we hired to help us cross the Panama canal: Bolivar, Dracula and Juan

We dropped anchor after midnight, a high-speed dinghy picked up the pilot, and the line handlers settled down on deck for the night. We had a 0530 scheduled start, so I set out fruit and cereal in the galley for the line handlers and other early risers.

After a restless night, I woke to find the boat already underway. Another pilot took us through the next two locks. He was personable and full of information about the canal, which he enjoyed sharing with us. He told us the pilots were both well paid and highly sought after by countries with locks all over the world.

The sun was already up when we started out, and the line handlers moved about the boat looking for shade. We proceeded to the Pedro Miguel Locks, which we were scheduled to transit at noon.

As we approached the lock, my son, Turner, called from his office in Sarasota. He and his colleagues were watching a black freighter enter the canal on his computer. I told him we were right behind the freighter. Suddenly he let out a yell, “I can see Hope and Glory and people moving around the decks.” 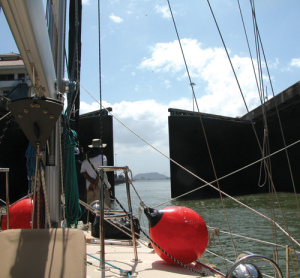 The afternoon was hot and sunny as we proceeded beside a tugboat through the canal to the last lock, the Miraflores lock. At the invitation of the tug captain, John jumped aboard and rode with them until we reached the Pacific side. People waved to us from the restaurant overlooking the Miraflores locks. It’s a popular place for visitors to watch the never-ending spectacle.

A few days later Joe and I had lunch there and watched the procession of ships and boats of all sizes and nationalities cross from one side of the world to the other.

We left the Miraflores locks and sailed into Panama City at the end of the day with the sun glinting on the high-rise buildings. It was like sailing into New York Harbor on a summer’s eve minus the Statue of Liberty.

At the Balboa Yacht Club, a driver took us to a boutique hotel Tina had arranged. Unknown to us, we arrived for Mardi Gras, which we celebrated with half a million Panamanians.

After several days in Panama City, we boarded Hope and Glory and made our way back through the canal, and after a brief stop at the now-defunct Panama Canal Yacht Club to provision, we were on our way back to Sarasota.

Patricia Moore began sailing 30 years ago after marrying an experienced sailor. Patricia and her husband, Lt Joe Barnette, SN, live in Florida and are members of Sarasota Power Squadron/22. They have sailed their Island Packets in the Great Lakes and the Caribbean as well as on many other long passages.