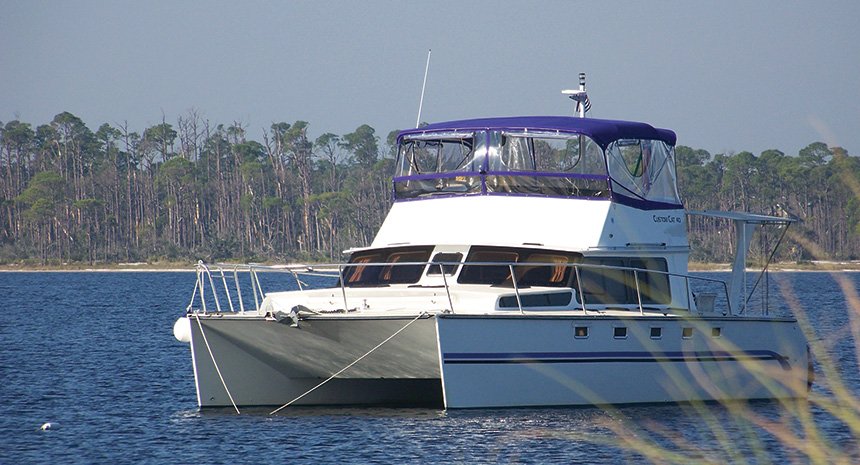 On our way home after cruising the Erie, Rideau, Chambly and Champlain canals and the Thousand Islands area, we anchored in Mile Hammock Bay on the Intracoastal Waterway near Camp Lejeune, North Carolina. We ate dinner, admired the sunset and were watching TV when something felt wrong. Cat House, our 40-foot power catamaran, was tilting forward. I checked the forward cabin and stepped in several inches of water on the starboard hull floorboard. We were sinking.

The towing company would take an hour to reach us—too late. We were on our own. The two forward compartments had about two feet of water, but neither the bilge pumps nor the hand pump were making much difference. I had always considered Cat House to be unsinkable because of the two bulkheads in each hull. I never thought the “Titanic effect” would apply, causing water from the forward compartment to flow over the bulkhead to the next compartment.

Taking drastic action in the dark, we beached Cat House head on the Marine Corps’ gently sloped concrete landing area. After a while, the starboard pumps picked up enough water to lift Cat House, which started to pivot with the right-angle wind. A quick starboard engine thrust beached it again at the proper 90-degree angle.

I had always considered Cat House to be unsinkable because of the two bulkheads in each hull.

When the towing company showed up, the knowledgeable captain did a quick evaluation, and we agreed to pull Cat House away from the landing area and moor it to a bulkhead. By the time we finished, the three starboard bilge pumps had done their job, leaving behind soaked carpets. On the forward port section, a burnt smell indicated the bilge pump was fried; the water level had only gone down a bit when we used our hand pump.

It was almost midnight, and we were tired after the adrenaline rush. The towing company captain hesitated when I proposed using his pump to empty the forward port compartment and prevent a repeat of that sinking feeling. The pump took five minutes to empty the compartment. No big deal, right?

Wrong. We now had used a “dewatering” device, which is specifically stated as “salvage” in all towing companies’ contracts. So a long conversation ensued about how much I should be charged. After two phone calls to the towing company’s local office, the affair was settled with a not insignificant check because we had inadvertently fallen into the expensive salvage quagmire.

We went to bed at 0100 and slept like babes until dawn when a look in the bilges found them dry as a bone. At the next marina, we rigged the spare bilge pump in the forward port compartment.

We’re still not sure how the water got in the forward compartments. For air circulation in those compartments, I had installed a vent with its 4-inch diameter facing forward. Could that much water flow through the vent? Also, the deck hatches had started to bow slightly—another potential water entrance?

Some people recommend either a bilge pump that automatically starts when the water level goes up or a separate float switch. Since both can become stuck with debris, we didn’t rig them on Cat House, usually relying on visual inspection when hauling the anchor. We had rushed our departure the day before as a thunderstorm rushing in from the north had threatened our Neuse River crossing.

As to the “Titanic effect,” a bulkhead inspection showed the water level had never reached the lowest opening. But the combined weight of all the “stuff” on board plus the rainwater in the forward compartments had brought the water pump through-hulls below the waterline and seawater back-flowed slowly but surely through them. When Cat House was emptied upon our return home, the waterline went up close to 3 inches.

Looking back, our USPS training helped us resolve the dilemma and kept us out of danger. Although we were probably not in a salvage situation, it sure didn’t feel that way at the time.

So be prepared, but also be ready for life to throw you a curve ball.

P/C Gerard Meunier, SN, joined Norwalk Power Squadron/2 for the education before working overseas for many years. After retirement, he moved to Florida and joined Cocoa Beach Sail & Power Squadron/23, where he has been commander and currently serves as newsletter editor. In 2005, he took Cat House on the Great Loop, the first item on his bucket list.